if you really want to scare yourself silly, then by all means read this: It Can't Happen Here, by Sinclair Lewis 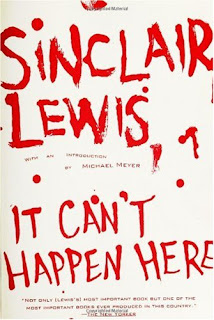 Given what's going on in American politics right now, this book wins my prize for most frightening read of 2016.

To put the novel in its historical perspective, I turn to an article in the New Yorker written by  Alexander Nazaryan  (October 19th of this year) that says

"Sinclair Lewis published the novel as Adolf Hitler was making Germany great again, violating the Treaty of Versailles by establishing the Wehrmacht. Benito Mussolini invaded Ethopia. Things at home weren't much better: a race riot in Harlem, dust storms in the Midwest. President Franklin Delano Roosevelt signed the Social Security Act, but the promise of the New Deal remained unfulfilled for many. The Times, that November, reported on a meeting of the New Jersey Bankers Association, whose president offered a blunt assessment of the national mood: 'America is tired of adventure and anxious,' the man of industry said. The people wanted 'safety and conservatism again.' "


I'm not going to go into any detail here,  but the man at the center of American politics in this story  is Berzelius (Buzz) Windrip, a seemingly down-home sort of populist candidate who ran against FDR and won, due to his appeal to potential voters who are in agreement with his rhetoric about financial security and anti-immigrant nativism. Once in office, he begins to usher in


" a fascistic regime of suppression, terror, and totalitarianism -- all draped up in red, white, and blue bunting." (ix)

Standing against Windrip is (dare I say it?) the liberal media, here represented in the character of Doremus Jessup of Fort Beulah, Vermont.  Jessup completely gets what's really going on and feels a deep need to channel his outrage into some sort of action. As things continue to get worse, as institutions designed to safeguard American democracy are shut down one by one, well, you get the drift.

The novel reveals how it can happen here, but much more interesting to me was watching one character in particular, Shad Ledue, Jessup's very unhappy former handyman, "the kind of vindictive peasant who sets fire to barns."  Ledue is part of the working-class poor who feels he's not been given proper respect by his employer, so galvanized by Windrip's rhetoric,  he throws  in his lot with Windrip and the single political party the Corpos, and starts moving up the ladder of power with revenge against Jessup his number one priority. 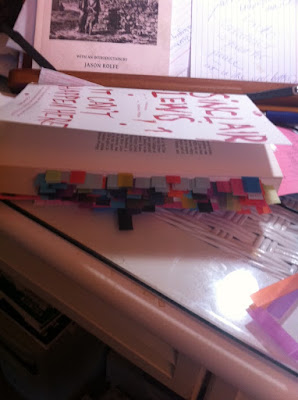 Considering the huge number of page tabs I stuck in this book, I obviously I found plenty to think about here, and I could easily talk about this novel for hours.  But I won't. I read this book through a day and an entire night -- no way was I going to put this one down before I finished.  The knots in my stomach got tighter and tighter -- quite frankly, I had a full-blown, serious case of paralyzing fear reading this book, and when the election came and went, well, it all came back to me again, making things even worse.  Even now, nearly a month after I finished it, it still has that same power.  It continues to stay active in the back of my head, making it a book worthy of every second of reading time I put into it. Not many novels can do that, quite frankly.

Someone said to me some time before the election that if things went a certain way, reading this book would be "moot," to which I say pish-posh, you're wrong.  Lewis wrote this novel as satire, and according to the introduction to this novel,  It Can't Happen Here  "gave shape" to a number of "anxieties" people faced during the 1930s, so it's very much a novel reflective of its time.  And as I replied to said person, good literature is never moot. If a book written some eighty years ago can weigh so heavily on the mind because of what's happening in America right now, well, that's one hell of a story, and by no means moot.