These Long Teeth of the Night: The Best Short Stories 1999-2019 by Alexander Zelenyj 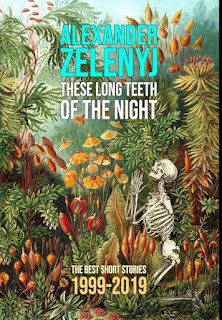 9780988392212
Fourth Horseman Press, 2022
421 pp
hardcover
A few weeks back when I found an email from this author in my inbox asking if I might like to read this book & post my thoughts about it,  there was absolutely no way I was going to say no.  I have loved Alexander Zelenyj's work from my first encounter with it because there is just some inexplicable something in his writing that really touches me.  His stories here and in his other books are a mix of horror, fantasy on the darker side, speculative fiction, science fiction, the weird and the strange, so that any attempt to strictly pigeonhole his work is just plain folly.    As to the stories he offers here, as he says in his introduction, his "strange fiction babies" can be

... rotten little bastards, merciless and feral and long-toothed, who won't hesitate going for your jugular"

while at the same time, there are others who are "gentler companions and provide good safehouses along a dangerous route."  There are more who fall between the two, "just plain oddball kids, a little deformed, a little peculiar (occasionally with uncanny abilities), but sometimes with a whole lot of heart."   Now that I'm thinking about it, maybe it's that "whole lot of heart" combined with compassion for those who have suffered that gets under my skin when I read Zelenyj's stories.  At the same time though,  most  of these stories seriously disturbed  the hell out of me, causing me at times to put the book down and go do something else while thinking about what I'd just read.   If I'm spending time rolling a particular tale around in my head, that's a good thing -- here there are no tidy answers, which is just the way I like it.
Since there are twenty-eight stories in this collection, I'll just pick a few of my favorites to highlight here.  Ever since I was introduced to the work of Alexander Zelenyj I've been absolutely fascinated with his stories of the Deathray Bradburys, an underground band (and much more)  described on the back-cover blurb of his Ballads to the Burning Twins (Eibonvale 2014) as I noted in a post about his Animals of the Exodus , as "the most infamous cult band in the history of rock and roll."  In  "On Tour With the Deathray Bradburys" in this volume, their songs are described as having "an obsessive focus revolving around themes of escape from a decadent, increasingly violent and racist world to a paradisiacal place of salvation."  The "chosen" to accompany the band in a "mass exodus" scheduled for the end of August 2000 have a "deep spiritual need to escape their own personal woes," as well as "the misery inherent in life on Earth."   And by the way, they have more than a slight connection to Sirius "the dog star," which reappears in another story in this volume called "Elopers to Sirius," describing what will come to be known later as the Magahatti Massacre as witnessed by a freelance reporter who ultimately published a book about it.   "The Prison Hulk" is related by a man arrested for stealing a loaf of bread for his children and a snuff box for his wife.  The "gaols and bridewells" are "filled to brimming" so the powers that be decided to repurpose old ships into "floating dungeons" to accommodate prisoners. Existing in the most godawful conditions, the narrator soon comes to realize the truth of a "Pirate Prophet"  that "Apocalypse will save you..."  I have to say that this story completely unnerved me because of the images that went through my mind  while reading.
One of the most haunting stories is "Highway of Lost Women" which starts out with four women on a road trip.  As the author notes in his brief introduction to this tale, "each of their lives has met with insurmountable obstacles as a result of their gender," with the trip designed for "reclaiming their friendship, which has fragmented over the years."  The weirdness begins immediately, with the car coming to a screeching halt on a deserted highway, the way blocked by a line of fifteen naked women seemingly having come out of nowhere.  As the friends are trying to figure out exactly WTF is going on, they look back in the direction they came from, only to see another line of women behind them.  Flashback time ... and then?   Also thoroughly unnerving is "Gladiators in the Sepulchre of Abominations" about which I will say very little except for the fact that the author goes full-on monster in this one but the question really is one of which species is more monstrous?
Broken worlds, broken people, trauma, promises of escape and salvation and here and there a glimmer of hope fill these pages, and unless you're  completely void of feeling, these stories hit the reader with a huge emotional impact. As the dustjacket blurb notes, his stories "confront the most abhorrent of monsters, embrace the truth and the wonder of the human condition, and pose questions without answer."  It's like Zelenyj has his finger on the pulse of human nature,  brilliantly investigated here,  which is one reason why his stories reach incredible depths and resonate so long after they're done.   Once again, he's produced a winner with These Long Teeth of Night, and I very highly recommend it.
Personal note to AZ:  thank you and Fourth Horseman so much for my copy!  I loved it.  'Nuff said.
Posted by NancyO at 9:07 AM