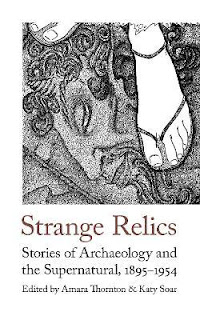 "We do not know what queer intricate effects the human soul may have on inanimate things. A physical environment may be charged with psychical stuff as a battery is charged with electricity, and, when the right conductor appears there may be the deuce to pay."
-- John Buchan from "Ho! The Merry Masons"
9781912766581
Handheld Press, 2022
227 pp
paperback
Strange Relics is another fine anthology of strange tales from Handheld Press,  this time linking archaeology to the supernatural.    As the editors reveal in the introduction to this volume, "all but one of the authors ...  called Britain home,"  where remains of the past were "being researched, mapped and excavated,"  spawning not only  historical and archaeological societies but also awakening different writers to the link between the uncanny and the remnants of the past.  Margaret Murray acknowledged that connection in her autobiography noting that "due to the nature of their work, archaeologists were essentially assumed to have supernatural encounters."  And then, of course, there's the fact that many of these stories were written during a time of great interest in "psychical research, spiritualism and the occult," involving intellectuals across a range of different disciplines. The  stories in Strange Relics, as the editors explain, move well beyond the "discovery-led trope in which a naive (white male) scholar/excavator brings to light that-which-should-be-left-buried," instead focusing on capturing  " 'fantastic' ; one might say magical, encounters with the material remains of the past..."  and it is through these encounters that "the barrier between the present and the past becomes thin, and strange happenings result."
Strange happenings indeed!   I'm sure the people in these stories would never have been the same after experiencing the weird phenomena that crops up throughout the book via "horrible" relics

"from a Neolithic rite to ancient Egyptian religion to Roman battle remains to medieval masonry to some uncanny ceramic tiles in a perfectly ordinary American sun lounge..."

and much, much more.

Readers who are well into weird fiction will recognize pretty much all of the authors whose work appears here; I only found one whose work I'd not read before,  Alan JB Wace,  and it's likely because he was an archaeologist, not a writer of weird tales, whose wife had put together a book called Greece Untrodden after his death containing stories that he and his field colleagues would tell each other after their evening meals.    I've previously enjoyed seven of the twelve stories found here, but rereading them in Strange Relics was  a pleasure:  "The Shining Pyramid" by Arthur Machen, "Through The Veil" by Arthur Conan Doyle,  "View From a Hill" by MR James, "Curse of the Stillborn," by Margery Lawrence (which I must say is a great tale in which someone truly gets what they deserve) as part of her Number Seven Queer Street,  "The Cure" by Eleanor Scott (from her Randall's Round) and  "Cracks of Time" by Dorothy Quick, which I first encountered in The Horned God: Weird Tales of the Great God Pan,  edited by Michael Wheatley and published by the British Library just this year and finally, "The Ape," by EF Benson.
Speaking of Pan, he is well represented here.    HD Everett's "The Next Heir"  concerns a young man, Richard Quinton, who answers an advertisement proclaiming that he may hear something to his advantage if he meets with a solicitor representing another Mr. Quinton, a relative in England.   It seems that the elder Mr. Quinton is looking for an heir to whom he might pass on his estate, but as young Richard will come to learn, there are certain conditions that must be met for this to happen.  In this story, the author approaches the great god Pan differently than in any other story I've read about him; I won't say how but it is certainly unique as well as thought provoking. "Roman Remains" by Algernon Blackwood also contains a Pan figure, and we are clued in to this right away as we're told that "Queer things seem to go on in a little glen called Goat Valley" and that the "superstitious" locals avoid it in the daytime.    Enough said about this one except that it is truly a gem among Blackwood's tales.
Not a Pan-related story, in "The Golden Ring" by Alan J.B. Wace a man is gifted a golden ring on a string of yarn by three women and given orders not to lose, sell or cut it.   He finds the whole thing "rather silly" but trust me, there is nothing at allsilly about what happens next.  This story delves not only into mythology, but academic debate as well.

I positively loved John Buchan's "Ho! The Merry Masons." Edward Leithen (now with the Thursday Club, the successor to the Runagates Club) relates a bizarre incident that happened to him on a visit to his friend Barnes Lacey ("with an antiquarian conscience") at his house named Scaip.  While on a walk to see a nearby church with "several Lacey tombs" at Fanways,  Leithen finds the village with its "string of ancient homesteads, each sending up its drift of smoke from its stone chimneys"  to be "snug and comfortable," but this description does not extend to the church.  His host finds it "A noble house of God," but swears that "the Devil had a good deal to do with the building of it."  Turns out that the medieval masons may have been "under the special protection of the Church," so as to secure a heavenly afterlife, but it wasn't exactly Christianity that served as their inspiration as much as "Pagan miscreants."  What does one do, exactly, when the associated rites of these masons find themselves embedded into the "very framework" of one's medieval-era home, "built out of the heart of darkness," the mortar "wet with tears and blood, and death had plied the mallets."     Think Stone Tape  -- I first encountered this term earlier this month while reading Will Maclean's novel The Apparition Phase then watched the film/teleplay written by Nigel Kneale and was seriously blown away.  That was 1972; evidently Buchan had figured it out in 1933, and the concept goes back even further -- apparently in 1911 (according to the introduction), as one of the founders of the Society for Psychical Research had recognized that "those now living" who may be "endowed with some psychic sensitiveness" might pick up on echoes or phantoms in places where "some kind of imprint on material structures" has been left.
My vote for most disturbing story in this anthology goes to Rose Macaulay's "Whitewash."  While vacationing in the Mediterranean on the Isle of Capri, a woman reading The Story of San Michele expresses to her aunt  that "it's nice to know what an excellent man Tiberius actually was, after all one was brought up to think of him."  Evidently, Suetonius was all wrong about him -- as she notes, "Tiberius has been cleared" and he was in truth a "saintly" emperor.  But after what was supposed to have been a refreshing swim in one of the caves ...   Super shivers from this one, and even better, the aunt's take on whitewashing is more than relevant to our present.
Editors Amara Thornton and Katy Soar have selected some great stories for inclusion in this volume; I can only imagine the huge amount of time and effort they've put into making their choices.  I have to say that  Handheld Press is fast becoming one of my favorite small indie presses, and each of their  "Handheld Weirds" that I've had the pleasure to have read have turned out to be absolutely awesome.  I have discovered many new-to-me authors from the past and  many stories I'd not previously encountered, which is of course something I always look forward to in my reading.   Strange Relics is a must read for anyone who enjoys weird tales or strange fiction; in this book the added angle of archaeology takes these stories to another level indeed.
definitely recommended.
Posted by NancyO at 7:45 AM