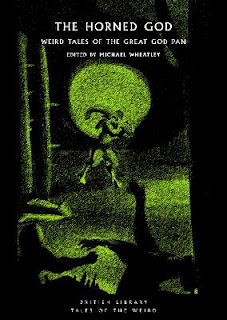 9780712354967
British Library, 2022
312 pp
paperback
Some time ago I read Paul Robichaud's nonfiction work called Pan: The Great God's Modern Return and at the time I noted that someone would really be doing a favor for readers like me if they'd collect and compile every known story written about the great god Pan and then publish them in book form.  Well, it's like someone heard my plea; although there are only seventeen "Pan-centric" stories/poems in this book, it's a great start.  The best news is that outside of Machen's original Pan story included here (which is frankly one of the creepiest tales ever), I hadn't come across any of the others except for E.M. Forster's excellent "The Story of a Panic" which more than epitomizes the theme that so clearly runs throughout the book.  As the editor notes in his introduction, the stories in this book focus "on the representation of Pan during the late-nineteenth and early twentieth century," ranging from 1860 to 1949.  Wheatley's selections include not only the "sinister Pan," but cover interpretations from the Plutarchian, the Renaissance, and the Romantic.  And as Pan serves as the "guardian of the natural world," these stories, again quoting the editor, "suggest a way to return to a primeval state of being, as embodied by Pan and his wilds."
After  the book's opener,  Oscar Wilde's  "Pan: A Double Villanelle,"   in which Wilde beseeches the goat-footed god to "leave the hills of Arcady" because England in his grey, contemporary world "has need of thee,"   this anthology starts storywise with Machen's superb novella "The Great God Pan,"  a true masterwork which I never tire of reading.   The first story new to me here is George Egerton's "Pan" (1897) set in the Basque country.  Young Tienette  has been troubled ever since a wedding held at Easter time when she heard a fiddler play for the first time. His music, it seems, "must have held witchery in its cadence," and "her senses had quivered and tickled strangely" playing "upon the lute strings of her soul all through the months."   She felt that it had

"a strange call in it, like a fervid love-whisper in the dusk, and a power like the grip of a master-hand forcing one's head back to find one's mouth. It held man's need of woman, and woman's yearning for man, the primal first causes of humanity; and it had struck upon the most sensory fibres of her being ..."

Unfortunately, the feelings conjured up by the strange music weakens her resistance to a brutish suitor, with tragic results.  Barry Pain's solidly creepy "Moon-Slave" (1901) centers around  a young, newly-betrothed princess who doesn't feel alive unless she is dancing.  Wandering around, she discovers the entrance to a maze, and heads right to its center where the moon is shining brightly and she calls for music so that she can dance; she is mysteriously obliged.   One night, when the moon "called her," she grabs her dancing shoes and heads to her new secret dancing space, where suddenly a shadow passes over the moon during an eclipse; much to her detriment, she "heeded it not."  Her solo dancing is interrupted when suddenly she realizes she is no longer alone.  The last sentence in this story gave me a case of the serious shivers.   Another really, REALLY good one is Saki's "The Music on the Hill" (1911), in which a young woman who is determined to get her way with her new husband Mortimer convinces him that they should leave town life behind and live at his country house.  The land there has a wildness to it, so much so that Sylvia remarks that "one could almost think that in such a place of worship of Pan had never quite died out."  Mortimer tells her that it hasn't died out at all, and that he is not "such a fool as not to believe in Pan when I'm down here," and cautions her not to disbelieve "too boastfully" while she's in "his country."   Oh, Sylvia... if you had only listened...

The stories just get better from there, especially the gothic "The Devil's Martyr" (1928) which is just downright weird (a good thing) which is more than likely why it appeared in Weird Tales.  Its author is Signe Toksvig, who is the great aunt of Sandi Toksvig, the host of one of my favorite British quiz shows, QI.  That is neither here nor there, of course, but worth mentioning just as matter of personal interest.   The young Erik, Count of Visby, was made a ward of the Bishop upon his parents' death and taken in by an order of monks, where Father Sebastian (who is really into self-flagellation) has been preparing him for the novitiate.  His plans are upset when a stranger by the name of Michael of Lynas comes along, having gained permission from the bishop to take Erik away to his castle for a month.  Erik is more than ready to go, while Father Sebastian views Lynas as "Prince of the Air, robed in the red of eternal fire," about to carry off a soul with whom he'd been entrusted.  It doesn't take long until Lynas begins initiating the young Count into the worship of a deity immortalized as the statue of a "tall, young, beautiful, smiling god with his head turned and his chin tilted a little, as if he were following the echoes of the air he had been playing on the reed flute in his right hand," complete with horns.  In the introduction, the editor notes that here, Pan has been aligned with "his satanic sibling, Baphomet." One can only imagine what the good monks will have to say about young Erik's new calling.

You can find the remainder of the stories listed here; and while in the US for some reason the publication date shows March of 2023,  you can purchase a Kindle copy now.   I originally did that, but before I had time to start reading, I found my paper copy at Book Depository, available now.  As always, I offer major praise for the British Library Tales of the Weird series as a whole, and praise for this volume, which more than satisfies my strange addiction to tales of the goat-footed god.   Do not miss Michael Wheatley's introduction, which is excellent and provides a lot of insight into what you are about to read.