9783945795644
Zagava, 2020
186 pp, hardcover
I bought this book because it seemed perfect for October reading and because it takes place in an Abbey in a remote, rural area of England, a setting I'm completely drawn to.    After finishing Witch-Cult Abbey, I can say without hesitation that if ever a book was meant to be read as Halloween approaches it is this one.  When the first chapter opens with a quotation from Poe, well...you know it's right. 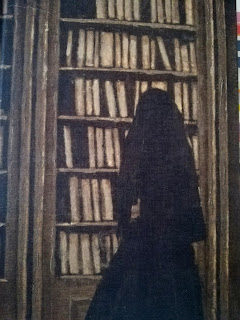 The war is raging in the skies over Britain when a cataloguer of antiquarian books gets the offer of a much-needed job.  The owner of the shop where he worked off Hampstead High Street had died and the business was sold, so Mr. Prior decides to follow up on the opportunity.  The letter from a certain Lady Caroline Degabaston takes him to Thool Abbey, Gallows Langley in Hertford, hopefully to gain employment cataloguing the Abbey's library.
Prior doesn't even make it into the building when he begins to feel an "acute sensation of nausea and loathing." He is taken to the library where he is left alone for some time; on going to look for someone, he notices that his watch has stopped.  Finally word comes that her Ladyship will not be able to meet him after all that day, and  a room is made ready for him in the attic, and there he finds some dubious-looking food as well as some articles of clothing. Settling in for the night, he is plagued with bizarre dreams.  When the next day arrives and there is still no sign of Lady Degabaston, Prior decides that it's time to leave.   The inhabitants of the Abbey, however, don't see things that way, and he is brought back to the Library where both he and his chair are chained to prevent any further attempts at leaving.
Let the strangeness begin.
As he starts his cataloguing work, Prior's efforts are stymied as books allow only brief glimpses into their contents before the covers are somehow sealed "into an apparently single block," or in one case, the pages wrapped around his hand.  The exception is a set of thirty-seven books by Thomas Ariel, Kruptos, "that magnum opus of the bizarre."   Prior's life is lived in the candle-lit library and then locked in his attic room, his sense of reality shaken as he endures days of "hopelessness and drugged lassitude," as well as discovering that the abbey's structure seems to be constantly shifting.  When an expected visitor, the Reverend Alphonsus Winters (which I'm guessing may be a disguised Montague Summers-like figure)  arrives on a mission, Prior learns about the history of the Degabaston family, as well as  the "demonic infestation" within Thool Abbey which
"radiates tentacles of spiritual contagion across most of Europe."
From there utter madness reigns; since the story is narrated by Prior, the terror becomes ever more palpable and immediate as we live through his growing sense of dread and through the horrors he soon begins to encounter.  The "surrealistic, non-linear pattern of derangement"  Prior experiences as he narrates his experiences extends far beyond the realm of chilling, falling into bleak, nightmarish territory.
Mark Samuels' excellent writing here kept me on tenterhooks the entire time as my ongoing question of  how much worse things could possibly get was constantly asked and answered.   Witch-Cult Abbey is one of those books that grows darker and more sinister at every turn as you wait for some sort of relief that never comes.  I can't count the number of times I was sorely tempted to turn to the ending, only to discover once I got there that it wouldn't have helped relieve the ever-tightening knots in my stomach.   It is also the kind of horror novel I enjoy reading -- it is intelligent and atmospheric, there is no descent made into utter gratuitous grossness,  and it hearkens back to the days of classic gothic/horror storytelling while remaining thoroughly modern weird in the telling.   The book itself -- absolutely old-style beautiful with fine illustrations marking the beginning of each chapter, and I am in awe of the work of Joseph Dawson here.    I sense more Zagava offerings coming my way.
Very, very highly recommended.  I'm shivering again just thinking about it.
Posted by NancyO at 12:41 PM