And My Head Exploded: Tales of Desire, Delirium and Decadence from Fin-de-Siecle Prague (ed.) Michael Tate 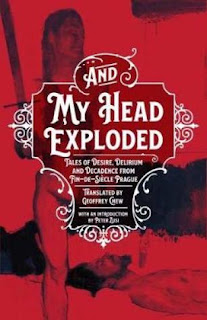 9780993446719
Jantar Publishing, 2018
translated by Geoffrey Chew
204 pp
hardcover
"... liberation is to be found solely when reality is abandoned and when everything that has constricted us hitherto is left behind."
-- Jiří Karásek ze Lvovic,  "The Legend of Simon Magus."
Some time back I read and loved Jiří Karásek ze Lvovic's A Gothic Soul (Twisted Spoon Press, 2016; originally published in 1900) and searching for more of his work online, I came across And My Head Exploded, which contains one story by this author.   Buy button clicked.
The truth is that I know little to nothing about Czech decadence or Czech fiction in general.  The introduction by Professor Peter Zusi  helped a bit, as he explained that  "the international reputation of Czech literature stands under the shadow" of "the best known and most influential work of Czech modernist literature," The Adventures of the Good Soldier Švejk (1923) by Jaroslav Hašek, as well as the work produced by writers of " 'dissidence' against the Communist regime in the second half of the twentieth century."   The stories in  And My Head Exploded  are representative of "another" Czech literature which has been "remarkably absent from the consciousness of English-language readers of Central European literature" ranging in date from 1892 to 1917.   He refers to it as ambiguous, unsettling, and "at times ... more grotesque," descriptors that are very much reflective of the work found in this volume, which is imbued with shades of gothic, horror, and the weird as well.

I've always felt that the opening story in any anthology or collection should not only whet the appetite for what will follow, but also offer the reader an idea of what to expect thematically. The first story,  Julius Zeyer's "Inultus: A Prague Legend" (1892) meets both of those criteria.  This story  is a blending of art, aestheticism, myth, death and a femme fatale sort of figure, along with an added religious/nationalistic dimension that enhances this tale of "bloodthirsty madness."  It begins with a chance meeting between a poor poet and a sculptress who is trying to create a sculpture of Christ; eventually and reluctantly he agrees to serve as  her model.  His face, though "beautiful and melancholy" isn't quite enough for her as she desires something more.   Zeyer also has another story in this book, "El Cristo de la Luz: A Toledo Legend" the story of  a zealous, would-be murderer who has a rather unexpected mystical union with Christ. After reading these two, which are part of a tryptich called Tři legendy o krucifixu (1895),  I decided I would really like to read more of Zeyer but there seems to be little of his work published in English, and a book I would like to have about him, Julius Zeyer: The Path To Decadence by Robert Pynsent,  is long out of print with used copies selling in the three figures.  Yikes.

Following Zeyer are two stories by Bozena Benešová, another writer who is woefully untranslated as well as the sole woman writer represented here.   The "Biographical Notes" section  describes her prose as

"anti-sentimental and psychological, dealing with women's issues, typically from the point of view of a marginalized female protagonist"

all of which are reflected in her "Tale for All Souls' Day" (1902) and "In the Twilight" (1900).  The first  takes place over five days in October and is related through the point of view of a woman in mourning.  She has four months left to go until the end of her "imprisonment"  so that she can go "out into the world, for the sun, for life, for love."  After all, social convention requires that the "year of mourning must run up to its last minutes."  It is from this story that the book's title is derived, as she recounts the crumbling of her brain, her  steps toward regrowing , and the moment when, as she says, "straight away my head exploded."  More overtly  critical in nature, her second story finds a woman "wholly overcome with pain and sorrow ... so long suppressed" finding herself letting it all "burst out in full force."

My hands-down favorite in this volume is "Cortigiana" by Miloš Marten.  Here, as in Zeyer's work, art and death come together in the story of Isotta, a beautiful scholar of Plotinus from childhood and now a courtesan in plague-ridden Florence.  She has discovered a way of "taking her revenge from life for its fradulence," and after one such moment, decides to "pursue the caustic fire that was penetrating her," taking her cue from the story of Sardanapalus in one final, fatal act of revelry. I couldn't help but think of Poe as reading this one, but there's more than a touch of the vampiric as well.

Two stories by Arthur Breisky are up next, "Prose Poem, After Felicien Rops, Mors Syphilitica," and "Confession of a Graphomaniac" (1909).  Translator Geoffrey Chew notes that Breisky "appended" both of these tales to his translation of The Suicide Club by Robert Louis Stevenson, adding a fake "translator's note" to the first.  In "Prose Poem" the Knight of Death pays a visit to a man stricken with syphillis in order to propose a deal.  The second story  is far darker, involving a narcissistic narrator relating a tale of incest, love, madness, betrayal and a mother who could be a stand in for Salome. I'll admit to having a good laugh at the end of   Jiří Karásek ze Lvovic's "The Legend of Simon Magus" (1911), about which I'll say nothing here.
The two stories closing out this anthology, "My Travelling Companion" (1912) by František Gellner and Richard Weiner's 1917 story "The Empty Chair: An Analysis of an Unwritten Tale" are very different in tone from those that have come before.  The first involves a man with a passion for travelling who takes on a companion "renowned for his ill-bred behaviour"  as he makes his way to Bavaria and the "Alpine countries." I had to give some extra thought to Weiner's masterful and very well-crafted tale, in which a writer has come up with a title for his work, "The Empty Chair," but the "story has never actually been written."  He plans to lay out the circumstances for why this is so, but something happens as he explains what he considers to be his failure. Watch carefully what happens as he does this.   I'd love to share more, but that would ruin an otherwise excellent story.
For someone like me unable to read the works of these writers in their native language, the publication of And My Head Exploded is a hugely-welcome addition to my reading repertoire. There's just something exciting  about knowing that there are all of these yet untapped, untranslated works out there waiting to be read and appreciated, especially  more Czech fiction in the vein of  Professor Zusi's  "another literature," and I'm sure this book represented only a small sampling.  I will say that as I looked up these authors online, it started to become important to me to know more about the times in which these stories were written  to provide some sort of context (for example, women's writing/women's issues  of the time) which is omitted here, but that's about the only complaint I can muster.
Very highly recommended and oh, what a pleasure to read!
Posted by NancyO at 11:33 AM