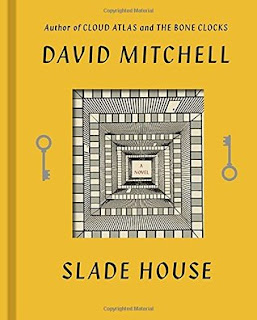 9780812998689
Random House, 2015
238 pp
hardcover
"Proper X-File, this is..."
I had absolutely no idea what I would be letting myself in for with this novel, nor had I even planned to throw it into the October mix.  Someone in one of my goodreads groups had just finished the book and really liked it, describing it as a haunted house novel, so I decided I'd dust it off and read it.   My bad for letting sit on my shelves gathering dust for five years, because I really had great fun with it.
Slade House started out as a Twitter story entitled The Right Sort in 2014, and according to the author it "asked more questions than it answered," so he "re-translated it out of Twitterese and into English."  The basic premise of this story, as the back-cover blurb notes, is that every nine years,

"the residents of Slade House extend an invitation to someone who's different or lonely..."

and the true question to be answered here is this: "But what really goes on inside?"

The house itself is located off an alley, and one must go through a "small black iron door" set in a brick wall to enter the grounds.  In a nutshell (because to tell is definitely to spoil), over the thirty-six year period during which this novel takes place, a number of different people find the mysterious door, make their way through and are never seen again.  While they are inside, each person finds himself/herself  in the midst of something unique and caught up in an experience specifically tailored for each indivual  -- the teenager, Nathan Bishop, for example, has been invited to come along with his mom Rita who has been invited to Slade House by a certain Lady Grayer  to attend a  musical soirée along with other guests including Yehudi Menuhin.  Then there's the cop who after nine years comes to investigate the Bishops' last known location and meets up with the present owner of the place. Or as just one more example,  Sally Timms, who accompanies a small group of fellow Paranormal Society friends who had planned to investigate the  house but  find themselves invited to a crazy party going on inside.  Each character provides his or her own firsthand narrative of his or her own experiences, allowing for more of a sense of immediacy to the novel, which heightens the chills and the creep factor all the way through.  Giving the book even more of an eerie edge are the ties between past and present that link together everyone who has entered Slade House.  Characters reappear in others' experiences, playing a role in some way or another, and with each successive visitor, we also get closer to what exactly is going on at the heart of it all.

Some readers have found the continual firsthand narratives to be "tedious" after a while, what I call a sort of lather-rinse-repeat format,  but I didn't at all -- with each chapter I braced myself for what could possibly come next, and there was even one that fooled me completely, prompting a huge out-loud gasp and a "holy s**t"  when I tumbled to what was going on.  Each character has a distinct life, a distinct background and his or her own voice; in reading their stories, it was easy to see that the author spent quite a lot of time on the people in this book, getting into their somewhat damaged psyches and fleshing them out with the most human of qualities, and as time moved on, so did worldly concerns outside of Slade House.   My only complaint about the book is that there seemed to be bits of expository overload here and there when I just wanted to move on with things , and that's really just a minor niggle in the face of what is a most delightfully-absorbing, sinister, haunting and mysterious story. Any writer who can toss in a trove of old tropes  into one novel, blend them together and make them come out as a rollicking good read and not same old same old tired certainly gets my vote.

A  heads up to potential readers:  while  not particularly necessary, it might be a good idea to have read Mitchell's The Bone Clocks prior to reading Slade House.  I didn't, but having just read a synopsis of The Bone Clocks earlier (knowing that this book was somehow related), the last chapter made much more sense; I also just discovered  that this book is just one more in the "vast shared universe"  in his other works.   The bottom line is that it probably won't really matter too much here -- curl up, grab your favorite tea, and just have fun with it.