Into the London Fog: Eerie Tales From the Weird City (ed.) Elizabeth Dearnley 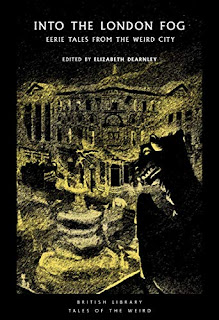 The British Library Tales of the Weird series is back again with several new titles (yay!).  I love these books,  so I'm always excited when one lands at my door.

In her introduction,  editor Elizabeth Dearnley  notes that in the years following the  Clean Air Act of 1956, "true London fog" had disappeared.  The stories and essays in this book range from 1868 to 1957, "all written within the decades when London was at its foggiest..."  She also presents a unique method of ordering her lineup, arranging the stories as a sort of literary tour  of London,  inviting readers to "take a closer look at some the more uncanny corners of the city."  The first story is set in Temple, with the final entry taking us to Peckham.   It's quite clever, actually, although not being a Londoner myself, I had to have a map of the city to refer to while going from story to story.

An unusual, and now that I think about it,  unsurprising  thing happened to me with this book -- aside from the five nonfiction entries, I found that I had read all but one of the stories included here, Rhoda Broughton's "The Truth, the Whole Truth, and Nothing But the Truth" (1868).  I knew that would happen at some point, as I tend to spend quite a bit of time reading ghostly/supernatural tales from yesteryear, especially those written by women.  Out of the nine fictional tales in this anthology, seven of these stories are from female authors; of those seven,  four are Victorian-era writers whose collected works are a large part of my home library.  It's okay though,  because aside from missing that feeling of joy derived from finding someone new to explore, the editor chose some of my personal favorites, Victorian and later.  The two male writers, EF Benson and especially Arthur Machen,   have also provided me with hours and hours of great reading in the past.
Speaking of favorites, Elizabeth Bowen's "The Demon Lover" (1945) gets my vote in this book.  John Banville wrote of her wartime stories that

"the city becomes an ethereal, haunted place, unhuman, otherworldly, where people move about in a fevered, dreamlike state."

Given that Banville's description  of  Bowen's wartime London aligns so closely  with Dearnley's vision for this collection,  I'm not surprised that "The Demon Lover" is included in this book.  What's great about this story  is that it works on different levels; if, however, you only give it a supernatural meaning, you miss something even darker underneath.  Mrs. Drover's "first scream" has haunted me for years.  This is not just a good story -- it is a great story.

Now to the one story I hadn't read,  Rhoda Broughton's "The Truth, the Whole Truth, and Nothing but the Truth."   This one is her first ghost story, written in 1868 as a series of letters between two women friends, Elizabeth and Cecilia. Elizabeth has found a London house for Cecilia and her family in Mayfair after an exhausting search, with the price an absolute steal. It's not until a few weeks later that Cecilia learns something about the house and informs her husband, but as a typical male knowing better than his wife, he "pooh-poohed the whole story," and "derided" her "babyish fears." Little does he know.  I have to say that I loved the male humbling in this story, in which the actual terror comes only at the very end, while in the meantime, Broughton does a fine job of escalating the tension.

The other stories in this book are as follows:

As part of  Into the London Fog, the editor has chosen to add in five pieces from various authors who have both experienced and written about the foggy city, another factor making this volume a bit different from the norm of this series.  At first, I was sort of  like "what the ... ?" because "eerie" must be in the eye in the beholder and I didn't particularly find any of the four to be so;  they were nonfiction, which completely threw me, and finally here I am, having made my way through four ghostly tales and then I run into Thomas Burke's "War" extracted from London In My Time, followed by thirty pages of Virginia Woolf and Claude McKay, completely distrupting the reading flow  until returning to the supernatural with Machen's "N" and the psychologically creepy "The Lodger. " Then it's back to Sam Selvon and more nonfiction before three more other-worldly tales, and by the time I'd  reached the article written about "Spring-Heeled Jack," my reading rhythm was just completely off.

Don't get me wrong: these little glimpses that offer "further constructions of the city and how it was experienced, showing the potential for strangeness in the most mundane urban encounters"

"War, an extract from London In My Time"  by Thomas Burke
"Street Haunting" by Virginia Woolf
"Pugilist vs. Poet, an extract from A Long Way From Home," by Claude McKay
"My Girl and the City," by Sam Selvon

were fine in their own right, informative, and very well written -- my complaint is that having them tossed into the midst of the fictional stories threw me off balance readingwise.  Perhaps a better way to introduce them would have been to have them all grouped together at the end of the fictional tales; I know I would have enjoyed the book a lot more had that been the case.

Overall, though, it is a good anthology, perhaps not the best in the series, but  another fine volume of the British Library's Tales of the Weird to add to the growing number of these books on my shelves.
Posted by NancyO at 10:27 AM