Under a Watchful Eye, by Adam Nevill 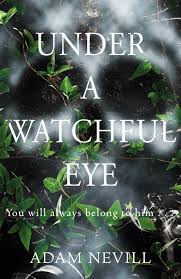 Just recently I said to someone that I don't believe Adam Nevill could ever write a bad book, and with the publication of Under A Watchful Eye, he has proven me right once again.  There are a number of surprises awaiting the reader of this novel, so anyone thinking maybe they'd like to read it is in line for a definitely bizarre but highly-satisfying experience.  As in most of the books of Nevill's that I've read, while there is definitely a horror story here, the threats also come from within. The author really excels in his ability to focus on a few characters and pull out what's deeply embedded; he is also a master of atmosphere that immediately grabs hold and never lets go until well after the final page is turned.

No long synopsis here since I will wreck someone's enjoyment of the novel by actually providing one. What I will say is that the novel centers around Seb Logan, a writer who has sacrificed much and worked hard to become successful.  Things are going quite well for him -- he's living a quiet, orderly and idyllic life, one he's definitely earned over the years -- until he begins to see a "dark figure"  watching him where ever he goes. But it's not just the figure that bothers him -- soon the sightings, some of which seem physically impossible,  are accompanied by the feeling that whoever it is knows his name, and he starts becoming paranoid, wondering why this is happening to him. Enter an old acquaintance whose presence once again in his life throws his very being into not just disarray,  but utter chaos, putting at risk everything Seb's worked for and achieved.  Because of their past connection he takes this person in, and that's when everything starts to hit the fan and come unglued.  What follows is a record of a spiral into the deepest levels of darkness -- and as Seb begins to discover, it is a darkness from which there may be no chance of escape.

As always, the author has written a novel that completely jangles the nerves as the story,  the dark atmosphere and the people all insinuated their way into and under my skin the entire time I was reading.  I could smell, see, hear and feel along with Seb -- that's how good of a writer Nevill is.  Add to that his uncanny ability to ratchet not just the tension but the sheer malevolence as the story progresses, and it's no wonder that I couldn't put this book down until I'd finished it, reading in the car as a passenger and  long into the night in a Miami hotel before we started our week of vacation. The outside world just completely vanished for hours, which to me says that I was completely and deeply enveloped in the novel.    I will say that although my favorite book is his Last Days, which I don't believe can be topped, this one comes very close to that same level of excellence.  Then again, as I said earlier, I don't think he's capable of writing a bad book at all.

While other readers may want to go into detail about what happens here, my advice is to not let yourself know ahead of time what's going to happen. Earlier I noted that there are a lot of surprises to be found here, but even more than being taken aback at just how very clever this novel is, the deliciousness is in letting everything unfold slowly.     I know when I've got something fresh, original, and just downright frightening in my hands when I have to resist the temptation to flip to the end, and I had to restrain myself from doing so many times.