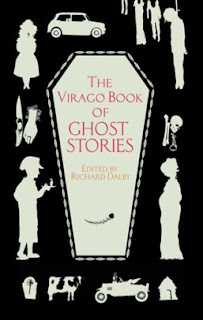 "...there's awful strange things in this world."
--  from "The Open Door, by Margaret Oliphant.

The Virago Book of Ghost Stories combines two of my reading passions.  First, of course, there are the ghost stories themselves, and these are, as Richard Dalby states in his preface, "arranged in chronological order,"  making for a great way to watch the development of the "form of the ghost story" over the last 150 years.  Yes -- that's correct -- 150 years.  The second thing I'm impressed with is that here, each and every story is written by a woman, some familiar and some more obscure writers whose work I've just read for the first time.   It is a superb collection and a definite must-have for the serious ghost-story aficionado, complete with little bio blurbs about each woman at the end of the book.   The only downside is that I've made a list of books to hunt down based on said bio blurbs, so there goes the wallet again.

There are thirty-one stories in this book and while some are good, there are others that are downright great and for me there wasn't one bad one in the bunch.  I suppose it's all about what people enjoy in a ghost story so I get that not everyone will share my enthusiasm, but I read them all of the time and I think it's one of the better collections I've read.

From here on I list the stories with only teensy bits about what's in them, so feel free not to read from here on, although I swear there are no spoilers whatsoever.

The book opens with a short tale by Charlotte Bronte, "Napoleon and the Spectre", which is a bit comical and sort of reminded me in a way of Dickens' "A Christmas Carol," but was quite different when all is said and done.  This one is followed by one of my all-time favorites, "The Old Nurses's Story," by Elizabeth Gaskell, one which is quite well known and which I've read many, many times but still manages to provide a spine chill each time.  That's greatness right there.  Amelia B. Edwards' "The Story of Salome" set in Venice also gave me a nice case of the willies as did "Reality or Delusion" by Mrs. Henry Wood of East Lynne fame.  Next up is a short story by one of my favorite ghost-story writers of yesteryear, Charlotte Riddell, "The Old House in Vauxhall Walk," which has a twisty ending I wasn't expecting, as do most of her stories.  Margaret Oliphant is next with her "The Open Door," set in Scotland, a true page-flipper from beginning to end as a man races to save his son from what's haunting him.

New to me is the writer Ella D'Arcy, whose "The Villa Lucienne" takes on a somewhat ethereal tone as a small group takes an "expedition" to a villa on the Riviera and gets much more than they'd expected.  That one is followed by "The Vacant Lot," by Mary E. Wilkins, an American tale in which a family decides to move when they get the bargain of a lifetime on a wonderful house -- but then come to realize that maybe it wasn't such a great deal after all.  E. Nesbit's "The Violet Car" also managed to produce hackles, as a woman comes to take on a job as nurse to a mentally ill patient, but realizes she can't tell which of the two people she's living with is actually the one needing her services.  It's a sad story, but done very, very nicely.  "The Eyes" by Edith Wharton is next, another one I've read before but still worth reading since Wharton's stories go right to the heart of human nature, as do those by May Sinclair, whose "The Token" is one of my favorites of the entire collection, focusing on a sadly-neglected wife who only wants to know if her husband still loves her.  Oh my gosh -- May Sinclair is one of my favorite authors and this story is one of her best.  That one is followed by another author who is new to me, Richmal Crompton.  Her story "Rosalind" is also a favorite and, like Sinclair's work, works on different levels requiring a second read for what's really going on here. This one is not only deliciously spooky, but very telling as well.


Margery Lawrence makes an appearance next with her "The Haunted Saucepan" which seemed a bit silly for a while until I realized exactly what was going on here, at which point it wasn't at all funny.  Margaret Irwin's "The Book" is a great story, one I've read before and one which has been redone a few times by modern writers.   Oh my god -- I was on pins and needles with this one even after having already read it and that speaks volumes.  Another equally good one with more than a tinge of sadness is "Miss De Mannering of Asham," by another author I've never read, F.M. Mayor.  Another page turner,  this story is one of the most haunting tales in the entire collection about a young woman whose life is lived in solitude until that one moment when ... Yikes! Great ghostly fare here, for sure, and I absolutely must find more by this author.  That sad tale is followed by a different sort of ghost story by yet another unknown writer, Ann Bridge, "The Station Road," in which a doctor's wife going to meet a family friend at the station is herself met by one of the strangest occurrences imaginable, and that's just the beginning.  Moving on, I will say that while the next story, "Roaring Tower," by Stella Gibbons isn't the best in the book, it's yet another one that is more than meets the eye at first glance.  It's set in Cornwall (perfect place for a supernatural tale!) and finds a woman looking back on her self-absorbed adolescence to a time when strange things found their way into her life.  I'm not a huge Stella Gibbons fan in the first place, but there's a definite undercurrent to be unearthed here.  Following this one we get back into the ethereal zone with Elizabeth Bowen's "The Happy Autumn Fields," about which I can say nothing except it deserves a double reading and is quite good.

Dalby's included a story by another favorite writer here, "The Mistress in Black," by Rosemary Timperley, which takes place in a small school where a young teacher was fortunate enough to find a position last minute, then comes to learn why.  Very nicely done, but then again, Timperley is a fine, albeit sadly-neglected author.  Next up is Celia Fremin's "Don't Tell Cissie" in which two women looking at retirement plan a weekend ghost hunt but don't want their friend to find out what they're up to.  This one is somewhat humorous when all is said and done.  That one is followed by a story by Antonia Fraser, "Who's Been Sitting in My Car?" another that needs attention between the lines but is just downright creepy.  Ruth Rendell is next with her "The Haunting of Shawley Rectory," which centers on a house in a small village that is only haunted some of the time, as the two people who stay there soon discover.  And you thought she only wrote mystery novels. Oy.  This is a good one, for sure. A.S. Byatt's entry, "The July Ghost" may be the saddest story in this book, one that offers a variant meaning of "haunted."   Next up is "The Dream of Fair Women," by A.L. Barker, the ending of which brings everything back full circle to its beginning, and that's all I'll say because to tell here would definitely be to spoil.

Coming to the end of the book, we find Penelope Lively's "Black Dog," which is by no means an average ghostly/supernatural tale; like many of the tales in this volume, there's much more going on under the surface than on it. I will say no more.   Following that one comes Rosemary Pardoe's "The Chauffeur," in which a woman discovers that her friends' home has its very own ghost and goes out seeking answers.  This one is okay, not great but still worthy.  Next up is a story with more of a Caribbean feel, "Diamond Jim," by Lisa St. Aubin de Teran, and it is truly an old-fashioned ghost story -- you know, the kind that should be read at night during a loud thunderstorm with rain and lightning while you're safely wrapped in a blanket. "Ashputtle: Or, the Mother's Ghost" by Angela Carter follows that one, and it is one of Carter's best short stories. Again, to tell is to spoil, so ... Elizabeth Fancett's "The Ghosts of Calagou" is another old-fashioned, shuddersome tale set in the "haunted hills of Calagou," where there are legends of dead men "jealously guarding their treasure." One man is about to check it out for himself.  Joan Aiken's "The Traitor" joins the ranks of the other sad, poignant tales, related by a a middle-aged "lady librarian" turned lady's companion who finds herself back in the home of her childhood quite by circumstance.  Last, but absolutely by no means least, is "Redundant," by Dorothy K. Haynes, about a man who "had always taken jobs that nobody else wanted" and the one he has here is likely the most surprising of them all.  Great ending on this one.

So that's it -- I cannot recommend this book highly enough, and as I said, it's a definite must-have for people like me who have a passion for ghost stories over the centuries, especially those written by women.  Absolutely delightful it is indeed, and now it's time to hunt down the other Virago volumes of ghost stories.