Just published and well worth every damn second: The Grip of It, by Jac Jemc 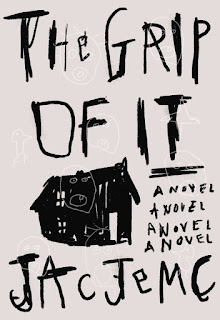 paperback/arc -- my thanks to the good people at Powell's.

Jac Jemc certainly gets major points for ingenuity here in her newest novel, The Grip of It, and coming from me, Ms. picky-pants, that says a lot.  The official blurb calls it "a literary horror novel about a young couple haunted by their newly purchased home," which is definitely the case, but it is not at all your standard haunted house fare.

The Grip of It is related via alternating viewpoints between Julie and James, the couple who have bought the old Victorian house at the end of Stillwater. They'd left the city to take James away from his "old haunts" because his wife felt they'd needed a change after he'd gambled away all of the money in his bank account. His gambling problem had put him into therapy, but she thinks that it's time for a "fresh start".  They buy a house that's been on the market for quite some time, and it isn't too long after they've moved in that they discover a number of things that need fixing. There's also something very off kilter here, and weirdness sets in almost from the moment they begin unpacking to start their new life.  Because creepy moments need to be experienced on one's own, I'm not going to go into detail as to what's going on, but things quickly begin to spiral out of control for this young couple to the point where it becomes difficult to separate what is and isn't real.

The ingenuity here is not so much in the haunted house horror story per se -- when all is said and done, the tropes that the author uses here have most certainly been done elsewhere, and the truth is that there are some things that are left unanswered.    What is original here, and what is in my opinion the thing that makes this book very much worth reading, is in the way the author mirrors the couple's search to try to get to the root of what's ailing this house (what's actually haunting it) with what's actually ailing/haunting this couple -- complete with "undercurrents," gaps, walls, and as James reveals, the "buried, fetid stories" which have "bubbled to the surface."  As Julie notes at one point,


"This house is sapping us, pulling out our cores"

and as the novel progresses, the reader comes to understand that the "grip" the house has come to have on this couple is far more menacing than either one of them could have ever realized.

There are so many things going on in this book that make it worthwhile. As just one example, there are several scenes that bring out the idea of   "alternative versions" of ourselves that we reveal to everyone, even those closest to us, and the idea of others'  unacceptability of "the wilderness of the mind," where people "will always wonder what to believe," since they "expect the mind's voice to unstitch only when alone."  The Grip of It  is also another fine example of a writer using the horror genre in a most original way well beyond the norm as a vehicle for exploration into the human psyche.

Readers who go into this novel expecting the standard haunted house fare may be somewhat disappointed, since, as I said, this story, when all is said and done, actually moves further beyond, well into the literary zone where the focus is more on people.   My only real issue is that sometimes what the author has her characters thinking is more authorial than real-world speak, which for me came across a bit overblown at times, but hey -- that's a minor thing compared with what she's done here.  I hope this book does well and that people will come to realize that horror can convey so much more than the content of  much-overdone tales of zombie apocalypses or vampire plagues and that when done right, it can move into the realm of the literary.