in my humble reader's opinion, this book is a masterpiece: 'Twixt Dog and Wolf, by C.F. Keary (ed.) James Machin 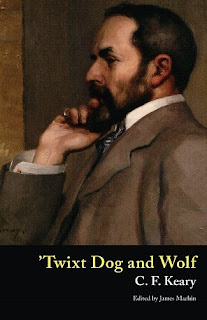 Honest to god, 2017 has been one of my best reading years ever, and I am pretty sure it's because I've started to become much more selective in my reading as I start to zero in on what really hits my buttons as a reader.  Admittedly, some books I read just for relaxation and fun or for  when my brain is exploding after having been through several literary choices in a row; others are repeat works by favorite authors, some are great for when I'm in the mood for chills up the spine, but the true, inner joy for me has become finding works that are different, exquisitely written, way off the beaten path, out of the mainstream books in which plot is but a handrail for making my way through what's really going on.

To add to my delight,  Valancourt  has published what I consider their best release in their history,  'Twixt Dog and Wolf, by C.F. Keary, reinforcing my belief that Valancourt has somehow managed to tap into my reading wavelength.  It's positively eerie when I stop to  think about it.

As we're told by James Machin in his excellent introduction to this book, the title 'Twixt Dog and Wolf  "comes from the French expression for twilight,"

"... 'Entre chien et loup' which conveys so poetically the eerie crepuscular shift from the prosaic and familiar to the baleful and unknown."*

He goes on to say that this book


"collects work that ... expertly evokes an oneiric, vesperal realm of disconcerting shadows and dark forces moving unseen, yet tangible, in tandem with our own" (vi)

and in that brief description, he's perfectly captured the feel of each of the stories in this book, but wait, there's more: Mr. Machin has also so kindly added the contemporary opinion of writer John Buchan (who also wrote his fair share of strange tales) which offers readers just a bit more insight into what they're about to read.  Buchan found in Keary's work


"...stories of diablerie of the strange sights and sounds which follow on the twilight, between the dog barking and the appearance of the grey wolf." (vii)

I'm not going to give any major details about any the stories in this book, but there are three long ones that fall under the title "As Breath into Wind."  The first is  "The Message from the God," in which the reeds whisper a terrible truth and bring word of an "unspeakable terror;" followed by "Elizabeth" a magnificent piece of writing set in Medieval Germany, where a woman comes to understand her true destiny.  This story was superb, a story which demands more than one reading since, as Machin reveals, it is laden with "alchemical allegory and symbolism." Personally, whether the reader truly gets into understanding those details or not, it is a beautiful, absolutely gorgeous piece of writing that prompted the immediate purchase of several works by German Romanticists. But for me (and please pardon the use of clichés here but I can't help it),  the true pièce de résistance, the jewel in the crown, the masterpiece of the entire collection here is "The Four Students" which is one of the best stories I've ever read set in this time period.  Oh my god -- if the whole book had just been this one tale it still would have been worth the price.  Set mainly during the Terror following the French Revolution, here a man hears and heeds the call of "the spirit of the place" with absolutely horrifying results. I can't say more, and anyone who decides to read this book will understand why.   Speaking of "the spirit of the place," I think readers who move beyond plot will discover that this is a prominent theme that is woven deftly into the fabric of all three of these stories -- how this is so I won't reveal but look for it.  Finally, the last section of this book is composed of ten short "Phantasies" that pretty much speak for themselves, with a level of macabre depth that belies their brevity.

As I said in the title of this post, in my humble reader's opinion, 'Twixt Dog and Wolf is a masterpiece, one of those collections that come along only once in a blue moon, and one that any serious reader of dark fiction absolutely must have in his or her home library so that he/she can return to it often.  As Machin notes at the end of his introduction,


"Keary's accomplishment is such that these stories and sketches delight and entertain, even as they contemplate some vague and dismal abyss." (ix)

For me, it is perfection between two covers.

"A dog is howling at the court-yard door;
Within, the horses drag their halter chains;
Behold! the world is full of misty rains;
And the old Shepherd knows the twilight frore.
The sea of Night will soon the Vale engulf,
With waves of dimness washing to the height;
And now from a near pinewood into sight
Steals one grey wolf."
Posted by NancyO at 10:43 AM