The Tarantulas' Parlor and Other Unkind Tales, by Léon Bloy 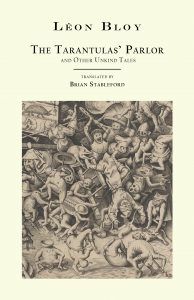 First, before I say anything else, I have to offer a huge thanks to Anna for my copy and for keeping me in Snuggly's book-release email loop.

Simply put, this book is beyond excellent.  I'm still a relative newbie in the world of French fin-de-siècle  and decadent literature, and a name that has kept popping up is Léon Bloy.  So I was over the moon when Anna asked me if I wanted to read this book, a collection of 32 short stories which, in the words of Brian Stableford in the introduction to this volume,  reflect Bloy's

"search for a particular naturalism of his own -- a naturalism which, not in spite of but because of its cruelty and its infusion with religious conviction, was markedly different in stripe from the Naturalism of Émile Zola."  (xxiii)

Erik Morse, writing  in The Paris Review also reveals that Bloy was not alone in seeking something different:  evidently by the 1870s, he


"had intimately acquainted himself with Beaudelaire, Villiers de L'Isle-Adam, Huysmans, and Barbey d'Aurevilly, in whose writings he discovered a kindred nostalgia for an aristocratic medievalism, which opposed the bourgeois materialism of the modern zeitgeist. These so-called decadents, accompanied by artists like Félicien Rops and Odilon Redon, transmuted the urban pessimism of Zola's naturalism into a preternatural landscape of demons and saints engaged in an eschatological battle for the soul of humanity."

Let me just say that if it's realism he was striving for, it shows in these tales, not only in his choice of earthy language, but also his interest in the more marginalized elements of society.  The Tarantulas' Parlor and Other Unkind Tales is a delightful blend of dark fiction, dark humor, savage storytelling and outrageous observations;  a majority of these little gems turns on the idea of exposing, as the quotation with which I started this post says "someone who is not, or might not be, the person one supposes," an  idea which is carried throughout the book I will also say that some of these stories are wicked funny, subtle,  laugh-out-loud worthy, and actually bringing forth a belly laugh in one case,  "The Tarantula's Parlor."  I also appreciate the way Stableford translated these tales -- there are a few instances where he'll leave a phrase or a word that doesn't fully translate well from its French context into English, and in footnotes he explains why.  Personally, I find that a very smart way to handle translation issues that arise, and I do wish more translators would take the same sort of care in their work. And as an added bonus, each little tale begins with a dedication from Bloy to someone in his personal orbit, and Stableford gives the reader footnotes containing a brief background on the connection between the author and the person to whom the story is dedicated.  It is a superb collection that serious readers do not want to miss.

Feel free not to read on if you don't want even the slightest hint of the stories in this book, which is all I can put together in a timely manner here.  Let me just say that each story is quite worthy of lengthy discussion, but this is neither the time nor the place. Favorites are marked with *.

"The Tisane" - in which a young man overhears his mother's bizarre confession
" The Old Man of the House," where a prodigal father returns to his daughter with some startling consequences
"Monsieur Pleur's Religion," the story of a miser but even more so about the people who despise him
* "The Tarantula's Parlor," which is  an incredibly funny tale about an evening spent with a certain poet
"Plan for a Funeral Oration," the short tale of a literary figure to whom "literary genius had been given to him as a bonus, but that was the trifle of his torture."
"The Captives of Longjumeau" -- A married couple suffering from their own distractions are always on the edge of great adventures but ...
* "A Bad Idea" is the story of a young woman who discovers she has married not one, but four men at the same time.  One of my favorite lines also appears here:


"To have but one soul and one brain divided within four epidermises -- which is to say, in the final analysis, to renounce one's personality, to become a number, a quantity, a package, fractions of a collective being. What a conception of genius!"

"Two Phantoms" explores the friendship of "two incorrigible virgins," and has a great, funny twist.
* "The Terrible Punishment of a Dentist" -- is an Oh Dear God, dark sort of story in which "a happiness so dearly conquered" becomes "poisoned by the memory of death." Then it gets even worse.
* "Alain Chartier's Reawakening" is another story that, when all is said and done, made me laugh out loud. I can't really say anything about this one or I'll give away the show.
"The Obliging Stroker" A man finds his "Ideal" who doesn't want him, but he doesn't seem to get the message. Another laughworthy entry, for sure.
"The Monsieur's Past," takes us back into the sad,serious zone and into the life of a young "heroine," who wants to marry a "mediocrity among mediocrities."


"Whatever You Want!" Not a peep from me about this one, but the end is a bit of a surprise.
* "The Last Firing" Now here is a good one that also works well for horror readers -- about a "whitener of sepulchers (sic) and his son. It's actually shiver producing.
* "The End of Don Juan" -- Admittedly, this one required a second reading and a lot of online reading in mythology to get to the heart of what's happening here, but once the "aha" lightbulb went on, it was like getting the punchline of a joke and it made me laugh. I can't spill this one either...the fun is in figuring it out.
"The Martyr" is not at all funny, but is a sadly tragic tale of misguided vengeance on the part of a woman known for her "sublime piety." Right.
"Suspicion" uncovers the story of a man "devoured" by unfounded jealousy and suspicion.
"Calypso's Telephone" is next, in which a divorcée makes an amazing discovery about the truth of marriage.
"Worn Out" -- a man beyond the point of down on his luck makes a new acquaintance who makes him an offer he can't really refuse.
* "A Failed Sacrilege" finds a woman used to having the world handed to her on a plate about to meet her match.
"There's Trouble Brewing!" A group of men described as "the canons of Infinity, the protonotories of the Absolute, the medical executioners of every probable opinion and every respected commonplace" meet together and swap strange tales to prove that "it's within the power of any audacious individual to transform himself into a thunderbolt and to circulate like the Gorgon in the midst of honorable crowds." But at the end...
"The Silver Mote" follows a man who "had the misfortune to be afflicted by clairvoyance in which a large number of honest men had died."


"A Well-Nourished Man" comes next, in which the narrator reveals that he never misses an "opportunity to promote the value of my contemporaries, and that it is a need for me to spread over suffering hearts the balm of my adjectives." In this case, his subject is an illuminator, one of the "best-nourished men ever observed beneath the mountains of the moon."
* "The Bean" concerns a cheesemaker who finds out a lot about his wife once she's dead.  This one is dark and twisted, but with a darkly-humorous edge.
"Digestive Proposals"  --  Another darkly funny story taking place among a group aspiring "to the supreme Athenianism" where Apemantus the Cynic is a prized guest. Tonight's topic: putting an end to the poor.
"A Cry From the Depths" finds the young daughter of a whore who has resisted following in her mother's footsteps at the pinnacle of suffering.
"The Reading Room" follows next, in which an entire household must share one reading room, to the detriment of young Orthodoxie.
"No One's Perfect" is about a man who "felt like an apostle," desired "the happiness of the human species," and  "killed in order to live, because it was not a stupid trade."
In "Let's Be Reasonable" a pillar of society and "precious example of professional integrity"  "whose eloquence could have disentangled the very filaments of chaos and petrified the darkness"  refuses to explain to his daughter why he hasn't eaten for two days.
* "Jocasta on the Sidewalk" is another one where the contents will have to be left unspoken.
"Cain's Lucky Find" finds a group of friends together over dinner, talking about what sorts of things they'd discovered on the public highway.  One story wins hands down -- with a chilling ending.
"The Animal-Lover" rounds out this collection, and tells the story of a penitent who sees the gaze of someone he killed long ago on a bronze image of the Lamenting Virgin.

My first excursion into the mind of Leon Bloy, and certainly not my last, The Tarantulas' Parlor and Other Unkind Tales is a book I can certainly and without any reservations whatsoever recommend to readers who find great joy in exploring this period in the history of literature, or to readers who, like myself, are absolutely fascinated by what moves people to do what they do.  It is absolutely, hands down an exquisite collection of stories.
Posted by NancyO at 3:14 PM