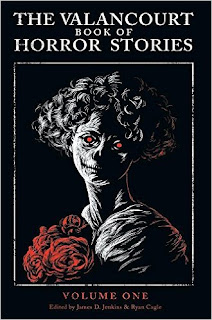 "Still, the feeling remained -- a feeling of uneasiness, of dread, almost as if something was menacing them -- something unseen watching -- and waiting."

As part of its "horror month" offerings,  that dynamic duo which is Valancourt has now given us Volume One of The Valancourt Book of Horror Stories, which, as the dustjacket blurb says, is a "new collection of tales spanning two centuries of horror," and is a mix of stories that range from "frightening to horrific to weird to darkly funny."  It is exactly as described, and given how much fun I had with this book,  I can just imagine the great time James and Ryan must have had in choosing the stories that went into it.


There is an added bonus as well --  at the beginning of each chapter, there are informative notes about each story, the author, and what Valancourt has published by each writer making an appearance in this book.

This book is tailor made for someone like me who thrives on vintage chills. While I get that not everyone appreciates or shares my old-fashioned horror-reading sensibilities, and that horror is indeed in the eye of the beholder, for me this collection was just about perfect.  I'm a VERY picky reader, so that says a lot.

Please bring out a Volume Two! I loved this book!!!!!!