hb#6: what would Halloween be without nightmares? Well, we can't let that happen: Nightmares: A New Decade of Modern Horror (ed.) Ellen Datlow 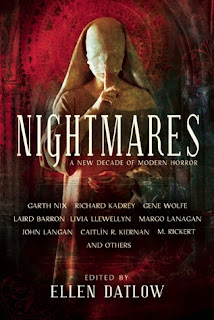 advance reader copy from the publisher - thank you!!


Looking at the bigger picture, the choice of title for this collection is absolutely spot on, for indeed, the majority of these stories are truly the stuff of modern nightmares.

Squirmworthy might also have been an appropriate title, since some of these stories were disturbing enough to the point where I had to put the book down, do something else, and then pick it up again.  There's no way I could have read this book in one sitting -- I'm sure that if I had, I'd have ended up with my own collection of nightmares and they still wouldn't have been as disturbing as what's between the covers in this book. It's definitely not for the faint of heart, and my guess is that for readers of modern horror, that's  a good thing. While personally I'd much rather curl up with a book of Victorian ghost stories or long-forgotten or neglected horror tales on the tamer side, I have to say that some of the stories in this book grabbed me  by the throat and just wouldn't let go.


My pick for best story here is one I've already read, but it is so horrific that I've never forgotten it.  "Little Pig" by Anna Taborska is the gut-wrenching tale of a mother who must protect her children and ends up paying a terrible price for their safety.  Oh my god.  Mark Samuels'  "Shallaballah" is another really good one, in which needing to get his face out there again, a famous soap opera star is taken to a strange clinic after a car accident disfigures his face. But is a comeback even possible? Admittedly I had to read this one twice, but the horror was all the better the second time.  Also requiring a second read was "Spectral Evidence," by Gemma Files.  The uniqueness in this author's storytelling method is to be applauded; it's one that owing to how it's written, must definitely be read between the lines.  A series of bizarre, randomly shuffled photos , helped by the "scribbles" on the backs of each  "appears to 'tell a story,' " of the deaths of two psychic investigators. One I've read before is Nicholas Royle's "Very Low-Flying Aircraft," the details of which I won't reveal.   It's a slow burn sort of horror story right up until the last minute when the lightbulb above my head goes off  -- my favorite type of creepy tale. And then we come to Laird Barron's "Strappado," which I have to say after reading it a number of times, still manages to scare the bejeezus out of me.  It's so good that whenever someone mentions Laird Barron, the first thing out of my mouth is "have you read 'Strappado'?"   Moving right along, I can't even begin to explain why I loved this story,  but "Was She Wicked? Was She Good" by M. Rickert had some particularly messed-up quality that appealed to me.  Here a little girl who is indulged by her mother has a terrible way of having a good time until her father decides he's had enough.

And now, for the rest of the stories.

In "Sob in the Silence," by Gene Wolfe, a horror writer invites his old roommate and his family to his home, which has a rather sordid and cruel history. I will say no more. Brian Hodge's "Our Turn Too Will One Day Come" is another one I've read previously, a creepy tale about a horrific family legacy. Very nicely done, the horror builds slowly until we're all in on the secret.   "The Goosle" by Margo Lanagan puts a new, sad, and downright creepy spin on an old familiar tale, while Steve Duffy's "The Clay Party" does the same with a group of Donner Party-like travelers who put too much trust in their guide. The only negative here is that the author gives away the show very early on so I knew what was coming down the pike and just had to wait for it.  "Lonegan's Luck" by Stephen Graham Jones is different -- the next time a snake-oil salesman shows up in your town, run.  This one has an appropriate twist that brought forth a chuckle.

"Mr. Pigsny" by Reggie Oliver details what happens when a man craves immortality and gets his wish. I've read better stories than this one by Oliver, but it's still disturbing.   Ray Cluley has an interesting tale here called "At Night, When the Demons Come By," a post-apocalyptic tale which, even though I'm not a fan of this sort of thing, was very much worth the read for two reasons: one, because of the demons themselves (one in particular),  and two (and more interesting),  it reveals how far people will go to ensure their own survival.  "The Shallows" by John Langan is an odd but good  story where a man's world changes forever and yet he continues on in his new, bizarre normal. I like Langan's work and this story is an example of why.  Considering that I detest zombie stories (haven't they been done to death???),  Dan Chaon's  "How We Escaped Our Certain Fate," surprised me with its poignancy.  Hats off to the author for making this one at least mature and meaningful.  I've already read Robert Shearman's "That Tiny Flutter of the Heart I Used to Call Love," which is delightfully strange. This time around I paid much more attention and realized that the future might not be so rosy for a new groom. This one is just messed up -- in a good way.  "Shay Corsham Worsted" is a story that is horrific in its implications, but one which is also funny in a strange sort of way. A would-be home invader has no clue of what he's set into motion when he chooses the home of an elderly man as his next target. As serious as things are here, the fun here is in the bureaucratic rigamarole. "The Atlas of Hell," by Nathan Ballingrud is another really good one that I liked much better this time around, but to tell is to spoil so I'll leave it at that.

Owing  to personal preference,  a few of the stories in this book get way more into real-life horrors than I care to go in fiction.  These stories are likely better suited for readers who like more edgy horror than I do.  While the writing is not an issue (it's quite good, in fact),  the subject matter and especially the level of violence in these particular stories just make for uncomfortable reading. When it comes to this sort of horror, I'd rather just say no thank you and move along to something more tame.   The following stories were probably the most nightmarish of them all, with the exception of my least favorite in this group, "Dead Sea Fruit" by Kaaron Warren, which just sort flatlined for me. It was more on the silly side than the horror side, and with apologies, it's the only story this book where I thought "why the heck is this one even in here?"   Lisa Tuttle's  "Closet Dreams" is most definitely the stuff of modern nightmare, in which a girl disappears, is held captive, and dreams of escape, only to find worse horrors than she imagined. Simon Bestwick is represented here by his story "Hushabye," where a man in his "thirty-something dread of failure and the dark" goes after a certain sort of predator ... I've read  "Omphalos" by Livia Llewellyn before, and wasn't exactly over the moon about it, but the tale centers on a young girl who desperately needs to find own her place to escape. Caitlin Kiernan's  "Interstate Love Song (Murder Ballad No. 8)"  is also a nightmare scenario drawn from the real world -- just downright creepy.  And last but by no means least,  "Ambitious Boys Like You" by Richard Kadrey is another one that's just a bit too over the top for my taste, wherein two young men decide to break into a house and get much more than either of them bargained for.


******
Nightmares is one of those anthologies where there's pretty much something for everyone. The only suggestion I might make for the future is to include more work by authors whose stories don't usually make it into these anthologies. In my very humble reader person's opinion, an anthology should work to showcase the best of what's out there, but when I'm seeing the same authors pop up over and over again in these collections,  it  makes me wonder who else may be out there whose work may be going unrecognized but who may be just as good of a writer as the ones reflected here.

As I'm quite fond of saying, horror is in the eye of the beholder and my favorites may not be to the liking of others.  In short, what I'm trying to say is that everyone brings something different to the reading table so this book isn't necessarily a one-size-fits-all sort of thing, but for me it's most certainly filled with enough quality material that I can easily recommend it to any horror reader.  It's a beyond-good collection on the whole, very satisfying and downright chill producing.

Thanks so much to Tachyon for my copy!
Posted by NancyO at 6:12 AM