hb #7 -- The Delicate Dependency: A Novel of the Vampire Life, by Michael Talbot 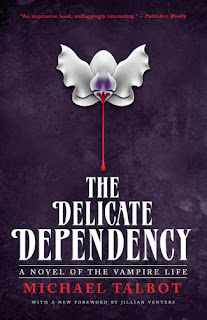 Oh, what wonderful things this author would probably have accomplished had he not unfortunately died so early. This guy was only 29 -- 29,  mind you!  -- when he wrote this book, and his death followed only ten years later.  The Delicate Dependency is my first venture into Michael Talbot's work, although not too far in I decided he was worth reading again, so I bought a copy of his Night Things.  Now I'm looking at his very short bibliography and  I see I will need to also pick up his The Bog, both of which, like The Delicate Dependency, are fortunately available through Valancourt Books.

There are just some books that make me feel like I've been wrapped up in a cocoon of perfect happiness while reading them, and this novel is one of those.  Not only is it a fun story with a number of unexpected twists and turns,  it also has that Victorian-style pulpy aesthetic that I love so much.  Once I started reading it, I was beyond happy that it turned out not to be your average vampire novel, but something that moved well beyond the same old same old and into the realm of just pure reading pleasure.

The story actually begins in 1856 when our narrator, John Gladstone, who is only seven years old at the time, sees what he believes is an angel.  Thinking about why the face is familiar to him,  he realizes that the young man looked exactly like the angel in the Madonna of the Rocks, da Vinci's famous painting that John had seen recently at the National Gallery.  It was a face that Gladstone never wanted to forget. 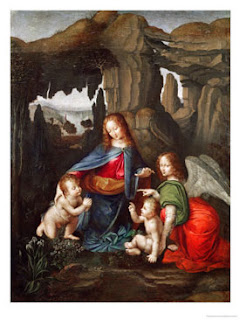 Flashing forward to Gladstone's adult years when this story really begins, he finishes medical school, marries, becomes a doctor to the socially prominent, and has two daughters, Ursula and Camille.  His wife, Camille had meant everything to him before her untimely death, and when he begins to specialize in research as a virologist, he studies the influenza virus that had killed her, Haemophilus influenzae.   He has even named a certain strain of the virus after her, Camillus influenzae, and has written a number of papers which have "caused quite a stir in the medical world." In short, he's an up and comer who is quite focused on his work.  One night in April, his carriage driver hits someone on the street who had "just stepped out of the shadows" and as Gladstone goes to check out the poor guy, he has a major shock -- the man who's just been knocked down happens to be none other than his childhood angel.

In the hospital, the patient, whose name is Niccolo Calavanti,  makes everyone else uneasy and because of his particular quirks like never eating,  a rival of Gladstone's decides to take over the case.  Gladstone decides to take the patient home where he learns that Niccolo is in reality, a vampire, and where he also learns a bit about Niccolo's history.  When Gladstone's daughters return from being away, Ursula becomes fascinated with Niccolo,  but it's little Camille who draws his real attention -- she is an idiot savant who has the ability to hear a piece of music once, and reproduce it perfectly on the piano no matter the complexity.  But it isn't long before Niccolo leaves the Gladstone residence, taking little Camille with him, vanishing off the face of the earth, so it seems, without a trace.  Enter Lady Hespeth Dunaway, with an eerily similar story about the disappearance of her son, also an idiot savant, after Lady Dunaway had made Niccolo's acquaintance.  They decide to team up when they get a lead that Niccolo just might be in Paris, and thus begins the adventure of a lifetime.  In and around the main thrust of the story, other things are happening that have a lot of bearing on their quest, but those I'll leave other readers to discover, and even giving away the subtexts running throughout the story will give away the show, so I'll leave those as well.

What's lovely about this novel is that there are so many twists and turns here that as soon as I thought I had it figured out, everything changes, and then once I thought I had it sorted "this time", I was happily and completely wrong.  And as I said earlier, the novel has that amazing Victorian ambience combined with pulpy aesthetic that I just love -- an old dark house with lots of secrets,  a very well-sequenced set of pursuit-and-evade scenes that I think I held my breath through, and much, much more, all leading to a stunning conclusion.

While other readers may be busy reading modern vampire novels like these, which are what's current in the market, I was happy as a little clam curling up with my succession of chai lattes and The Delicate Dependency,  which is so very different and actually more satisfying than any other vampire novel I've read in a very long time.  Readers who are looking for the sinking of fangs into the neck may not find this one to their particular tastes, nor will readers looking for yet another vampire romance likely find satisfaction here.  It is a very intelligent book, but most of all, it's just plain fun. Caution: do NOT, I repeat, do NOT read the introduction first, and above all, do NOT read any review that gives away anything else. The fun is definitely in the unfolding here.

I know I tend to get overly enthusiastic about these old books, a feeling I know is not shared by everyone and I apologize about babbling so, but seriously, I can't help it.  I know when I've got my hands on something good, and well, this one definitely is among the cream of the crop.