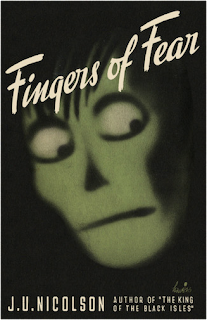 Yes, yes,  I realize it's now way past Halloween, but I did manage to squeeze this in before the 31st of October, so I'm counting it toward  my "road to Halloween" little miniseries of books.

This 1937 title has been brought back recently into print and out of obscurity by Valancourt, whose books are sending me to the poorhouse because I can't resist picking up their latest titles.  I'm smiling all the way there though, because so far I've had incredible luck with the books I've bought -- some I probably would never have even known existed without the Valancourt guys making it possible.  Fingers of Fear continues my run of good luck with this publisher -- here you have an old family home filled to the brim with family secrets, quite possibly an outbreak of lycanthropy, ghosts that stalk secret passages and (this is so cool) a portrait whose evil eyes watch anyone coming within its purview.  While the plot and the action may be a bit convoluted at times and a bit hard to follow in moments, it's a really fun mix of gothic and the supernatural all rolled into one.

Fingers of Fear is set in depression-era America, and young Selden Seaforth is down to his last coins. With no money and no job, life is tough for him; he's also divorced from his wife.  As he's despairing of what to do, bemoaning the fact that he's so poor that even his so-called friends from better days tend to ignore him, fortune smiles out of the blue in the form of Ormond Ormes.  Ormes had been at school with Seaforth -- they meet and Ormes offers Seaforth a job which seems tailor made for him.  It seems that because of some conditions in a relative's will, Ormes must have his rather extensive book collection catalogued and summarized (it's a bit more complicated, but that description will suffice for now).  Seaforth will have room, board, and desperately-needed money.  It all sounds so perfect, but as is usually the case in these sorts of things, it turns out to be a case of "if it sounds too good to be true, it generally is."  Ormes takes him to the family home in the Berkshires, Ormesby, drops him off and returns him to the city; and virtually no time passes before Seaforth has his first supernatural encounter which shakes him to his rational, logical core.  While trying to figure out what's going on at Ormesby and dealing with the inhabitants who keep family secrets tucked away for their own reasons,  the supernatural encounters increase and then the first body is found...


As I noted above, the action in this book can be a little convoluted but reading patiently pays off in spades. There are secrets within secrets to be found here, creepy secret passages that lead to an unexpected discovery, and the story is actually quite good. Above all, though, Nicolson had a major talent for atmosphere -- and the minute the reader arrives with Seaforth at Ormesby, he/she will be plunged directly into a veritable den of Gothic terrors served up with a side of the supernatural.   Aside from his wandering plot, the author writes very well. Considering he wasn't a regular author of supernatural/weird tales,  he pulls it off quite nicely.  It is also a book of its time -- Depression-era America is well portrayed in this story in terms of an embedded commentary on  underlying social issues of the 1930s.

For me, Fingers of Fear was a fine, fun read in an old-school horror/gothic sort of way. It may not capture the minds and hearts of modern readers who must have something incredibly gross, violent or downright demeaning in some cases to get their horror jollies,  but if like me you are finding your way back to a time before all of those elements  were somehow necessary for a good chill, this might just be a good one to pick up. This book is a very welcome addition to my ever-growing dark fiction/horror/weird/supernatural library where the Valancourt editions are slowly taking over the shelves.