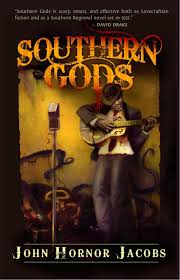 Have you ever been so engrossed in a story only to be disappointed as it  falls apart at the end? That's what happens here in Southern Gods.  Evidently most of the readers of this book didn't notice -- I'm looking at a HUGE number of 4- and 5-star reader reviews  both at GR and at Amazon.  Here's the thing -- it's one thing to create a world where such things are possible, but it's another thing all together to at least try to make you story somewhat believable in the context of that world.

In a very brain-candyish sort of way (which I'll admit, I need every so often to unwind) I was hooked on this book, which my pulp fiction group chose as its November group reading choice.  It starts with a brief but powerful prologue in 1878, then flashes forward to 1951.  There are two main strands of narrative here that will eventually come together -- the first is the story of Bull Ingram, a giant of a man and WWII vet who sees visions; the second that of Sarah (nee Rheinhart), who is fleeing an abusive husband, leaving him for the old family home in Arkansas to take care of her mother who is dying from lupus.  Ingram is a collector for a loan shark type of guy, but he is hired by another man,  a record producer who specializes in "black music,"  to look into the mysterious disappearance of his employee Earle Freeman.  Earle's job was to drive around to the small radio stations "peppering the countryside," deliver 45s & payola to get the music played.  Now he's gone -- the last known sighting of him was in the small Arkansas town of Brinkley, where there are only two cops who were of no help at all.  Finding Earle is only one half of Ingram's job, however -- he is also tasked with discovering the location and owner of a pirate radio station, also in Arkansas. The station plays the music of one Ramblin' John Hastur, a blues artist whose music has terrible effects on anyone who listens to it.

The second thread picks up Sarah's story at the family home (Gethsemane), where she has gone with her small daughter Franny. Her dying mother provides her with the excuse she needs to get away from her PTSD-suffering husband who has become abusive since returning from the war.  Sarah has time on her hands so she begins exploring the family library, and decides it might be fun to translate a book written in Latin, a subject she enjoyed in school.  Unfortunately for Sarah she picks the wrong book -- struggling a bit, she turns to a local priest who, coincidentally, just happened to be in Arkansas after being banished from the Vatican, where he was one of the priests in charge of the occult books in the secret Vatican library.  It also just happens (there's so much coincidence in this book it boggles the mind) that the book Sarah is currently translating was one formerly housed in the Vatican library, and the priest tries to warn her away.  But, of course, this doesn't happen and some very strange things start happening, meriting another visit with the priest who tries to explain it all.

Eventually (as if one couldn't guess), the two main threads come together and all hell literally breaks loose. Sadly, it's at this juncture where things start to royally fall apart.  To be fair, up to this point, I was very much into this story up to chapter 20 and then it was like the author said "what the hell do I now, once I have my two main characters come together?"  The result isn't pretty -- there is the stupidest sex scene, a truly bad deus ex machina episode complete with divine intervention (super ouch), crappy dialogue and super huge plot holes that just made me crazy.  Oy! It was like another author took over and had no clue what to do to bring this book to a decent close.  And as I noted up front, even in the context of the world Jacobs has created here where such things can happen, the ending was just badly done -- to the point where I wanted to toss the book across the room.  For me, even in a book like this that I consider major brain candy, there's really no excuse for that sort of thing -- and it was incredibly frustrating.  Jacobs could have done so much more with this story; as it is, it was disappointing to say the least.