back to our time with urban horror: Nightscape: Cynopolis, by David W. Edwards 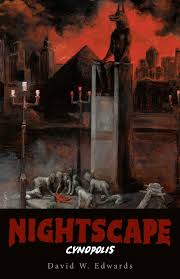 paperback (my copy from the author, thank you!)

Nightscape: Cynopolis is book number two in Edwards' Nightscape horror series of books (following The Dreams of Devils)  and looking at the back of the book, a third one is slated for release in October 2016.  I think I might actually have to pick that one up (memo to self) -- it's billed as "Cosmic horror brought home giallo-style..."  and anyone who knows me well knows that I have a major thing for giallo.  But that's next year -- the focus here and  now is on Cynopolis, which was just published in October.

This book is a true hybrid -- here you'll find a mix of horror, science fiction, and some high-powered thriller action on  the streets of Detroit.  Not my usual fare at all, but I thought I'd be brave and give it a try, taking an outing away from my reading comfort zone for a while.  This isn't a book you can breeze through in a day or two -- as someone from Kirkus Reviews notes it is

First pre-read selling point: this guy is no hack writer.  The second is my own pulpy fascination with all things Egyptian that stems from an indoor-kid sort of childhood.

Cynopolis covers three days/nights of sheer terror for the residents of Detroit. As the story opens, a homeless bookseller named Joe Kye  aka Khonsu  whose life had seen better times drops in to visit a friend.  Meet Gaston, aka Mister,  who is suffering from MS and has visions which according to his wife involve "decoder ring nonsense" --

Mister is at death's door, but in their respective heydays, both men were part of an activist group in the 1970s called The 19th Brumaire, hoping for a "real revolution" against the system,  specifically in terms of race.  Mister believes now that the movement was too "cautious," that they "should've burned the earth alive," and likens the underclasses of  African-Americans of Detroit today to


"thousands of stray dogs -- scared, disorganized, without a ready means to change things, scraping by."

While his wife and Khonsu think that Mister's brain is a bit warped, Mister believes he has been visited by a voice from Sirius or Sirius B that he calls Anubis -- some sort of entity that has been trapped in the confines of another dimension and one who is giving him instructions.  The long and short of it is that while everyone thinks Mister has gone off the deep end, with the help of this thing from another dimension,  Mister is able to release his anger and revolutionary zeal  via some sort of thought virus which makes dogs turn on humans and also turns some people into cannibalistic jackal-headed beings that want to destroy everything and everyone in their paths. Three days of sheer terror ensue while these things roam the streets, but they are not the only forces that the survivors have to worry about.

Obviously, this novel is so far off my own beaten path that I'm actually a bit surprised at myself for agreeing to read it, but it turned out to be  a pretty decent book. My description is way oversimplified -- there are human stories among the monsters, for example, the cop whose wife sees the writing on the wall about the dangers of living in Detroit but can't convince her husband that they really need to move, or Khonsu's story about how his life moved him toward homelessness and losing everything of value he ever had (including a family), etc. etc.   Sometimes though, the story seems unnecessarily complicated to me mainly in terms of many of the scifi aspects, getting a little out there for my taste; and as I said earlier, I'm not a big fan of action-packed, kickass thrillers. However, to be fair to the author, put together as a whole, it all actually makes sense in this world of his creation.

When all is said and done, this book actually got under my skin enough that I haven't looked at a dog in the same way since I read it. And despite the parts that I thought were over the top, it has enough of a creep factor to keep the pages turning and enough tension racheting so that you have to see the whole story through to the ending to find out what happens to these people.  While urban horror might not be my particular thing, I'm sure that people who are much more  into it will really enjoy this book.