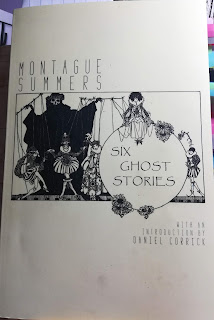 There is nothing quite like a good ghost story.  I read them all the time, and am beyond happy when I come across spectral tales previously unknown to me.  When Snuggly published this volume of ghost stories by Montague Summers, the add-to-your-cart button couldn't be pushed quickly enough.  It wasn't just that these were six more ghostly tales to be added to my reading repertoire, but the sad truth is that I don't believe I've ever read anything by Summers before.   I have a copy of  The Supernatural Omnibus which he edited (no Summers stories included), and of course his translation of The Malleus Maleficarum of Heinrich Kramer and James Sprenger, but that's about it. Mistake rectified now, with Six Ghost Stories, which sadly, as stated in the introduction written by Daniel Corrick, doesn't cover "the entirety" of Summers' "ghost oeuvre," but I will take what I can get.

In the author's preface to these six ghostly tales, he writes the following:


"When like Owen Glendower we 'call Spirts from the vasty deep,' let us be sure that the Spirits are no kindly commonplace apparitions but veritable powers of darkness, grisly evil things of terror and dread and doom, able to send a cold shiver through the reader who sits alone at eleven o'clock on a winter night, and perhaps even to make him hesitate a moment before he switches out the light in bed."

He goes on to say that


"unless the stage is well set and the situation made intensely real, ground-work which save in very exceptional cases entails fairly ordinary and not too romantic surroundings with everyday characters, the ghost story goes for naught."

I mention these bits of Summers' preface since they make clear what will be going on between these covers.  There will be no "beneficent" ghosts to be found here, and most of the haunting that goes on takes place in rather ordinary circumstances, happening to rather ordinary people.


The winner of this collection is  "A Toy Theatre," because of which I will never think of Shakepeare's Othello in the same way again.  The story begins as Sir Gilbert Richie makes a promised visit over the Easter holiday to the country house of his friend Tom Hunstanton.  Life follows a somewhat strict pattern there (Sundays being described as "at Northanger"), so on the day before he is about to leave, he is happy to step out and heads to the old nearby town to go to the post office.  He has some time afterward to  meander through the "quaint streets" of the old town, where he takes a look in the window of one of the "shabbier and dustier" old shops.  Having been an avid collector since boyhood of "tinsel actors, toy theatres, and colored sheets of characters," he is attracted by a "maple-framed tinsel picture of some absurd actor at Astley's of the Grecian Salon in the role of Aureato, the Golden Knight." Having ascertained that this picture and another like it had belonged to the now-deceased husband of the snuff-pinching proprietor, Sir Gilbert makes the mistake of asking if perhaps she has more of his belongings she'd like to sell.  "A Toy Theatre" sent a chill right through my bones, making me identify with the aforementioned "reader who sits alone at eleven o'clock on a winter night," hesitating just a moment before turning out my reading light.

The  five other stories in this book are also highly satisfying and quite delicious.   "The House Agent" finds a London couple married less than a year finding a perhaps too-perfect cottage for their weekend getaways in a small village.  "The Governess" begins as a tale told by an aunt to her nephew about a certain Miss Howard, the new governess at 27 Harley Crescent, St. John's Wood NW.  It seems that some strange phenomena began to follow her arrival there in 1890, which the inhabitants of the house could deal with, but for Miss Howard it was a different story altogether. "Romeo and Juliet" begins as a story told with curtains drawn, two people sitting in the firelight, providing the perfect atmosphere for recounting the tale of a young girl honoring her father's dying wish  that she "remain on the operatic stage for at least three years."  Looking forward to the end of that time, she has a feeling that "something is going to happen... ," which, of course, it does.  Along with "The Toy Theatre," another of my favorites from this volume is  "The Grimoire," a most outstanding story about a "collector of books on alchemy, witchcraft and the occult sciences" who lays hands on a rare volume he's previously never seen just prior to a visit to a Canon friend of his who shares his interests in old books.  The final story, "The Man on the Stairs" is also quite brilliant, providing a bizarre take on the stereotypical haunted house story.  The owner of Cherton Manor is upset when a friend refuses to visit him because of his home's reputation, and is so upset with "this spook business" that he makes an offer another man finds hard to refuse.


There are two things potential readers may wish to know before plunging into this book.  First, Summers seems to take his time in more than a few of these stories  setting the scene prior to the actual appearance of the "veritable powers of darkness."  While this is a necessary step, he tends to be a bit long winded at times, especially in terms of dialogue.    Second, I found that there were a couple of instances in which I found the outcomes predictable, but I chalk that up to having read a large number of ghost stories in my time.  While they're valid concerns, these minor flaws did not at all detract from my enjoyment of this book since these are definitely NOT your average ghost stories, and I have to applaud Snuggly for publishing this volume which may otherwise have never actually been put into print.