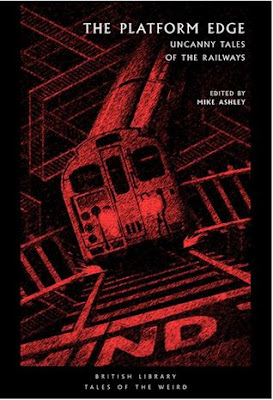 
So far there are thirteen books in the British Library Tales of the Weird series, making me wonder if we've come to the end because of the supernatural association with the number thirteen.  I hope not, since the editors of these books have put together stories I've never seen before, ranging from Victorian times through I'd say mainly mid-20th century, and so far, these books have brought me many hours of pleasure.    The blurb at the back of the book where the other titles are given says that


"British Library Tales of the Weird collects a thrilling array of uncanny storytelling from the realms of gothic, supernatural, and horror fiction..."

"revives long-lost material from the Library's vaults  to thrill again alongside beloved classics of the weird fiction genre."  While not all of the stories I've read so far in this series have necessarily been   "thrilling," they are beyond fun to read and for me at least, have served as a stepping stone into the work of   authors whose work I've never read.  In my case,  it's not just the stories themselves but more importantly, the discovery of these previously-unknown-to-me writers that has been the draw.  This time around there were only six, but that's okay -- it's six more than I knew of before.

The stories in this volume range from 1878 to 1985, thus covering over a century of railway-related weird/ghostly/supernatural and other types of tales.  In his short but informative introduction, Mike Ashley explains the rise of stories about "haunted stations and phantom trains" that hearken back to the early nineteenth century.  By 1860, as he writes, there had been "over thirteen hundred accidents in the UK alone," and that there is "little surprise" that with the mounting death toll, these sorts of tales "started to circulate." The earliest story in this volume in fact, the anonymously-written "Desperate Run,"  not only reflects the sort of anxieties felt about the trains at the time, or as Ashley puts it, the contradictory idea of the train as "sinister as it is remarkable," but also the dedication of those whose duty it is to see that all runs smoothly, two themes that carry strongly through a number of these tales in different variations.   As we move forward in time here, it's not surprising to see a number of stories in this book reflecting many of these same concerns about the subway.

The complete table of contents for this volume can be seen here; I'm not going to go through them in any major way in this post.

The stories in the first section of this book, "Departures in the Light" are of the weird/supernatural variety, with one exception: "The Tragedy in the Train" by Huan Mee, which is more a locked-room sort of mystery story.  Ashley included it because "it is such a convoluted and seemingly impossible crime" that he couldn't "let it go."  While they're all fun, honorable mention needs to go to L.G. Moberly's "A Strange Night," which starts out along the lines of the beginning of Aickman's "The Trains" before it goes elsewhere altogether, still more than managing to satisfy my appetite for the eerie.   Strangely enough and so very unlike me, my favorite story in the book was written in 1950; even stranger is the fact that it came from Astounding Science Fiction since I'm not heavy into the genre.   Even now I can't explain why this one grabbed me as it did, but AJ Deutsch's "A Subway Named Möbius" in the section entitled "Approaches in the Dark" captured my imagination so thoroughly that I read it twice in one sitting.  Maybe it was because of the idea that nobody noticed a missing Boston subway train at first, or perhaps it was the chilling ending; I just know I still haven't forgotten it and it's been some time since I first read it.  I remember thinking while reading it how very weird it would have been for someone riding on the subway at the time and first encountering this story.  While that one is an American story, the British subway system isn't at all ignored in this book:  there's Rosemary Timperley's  "The Underground People,"   T.G. Jackson's "A Romance of the Piccadilly Tube,"  "In the Tube" by EF Benson, "The Underground," by R. Chetwynd-Hayes, and my favorite of all of the British subway stories, "The Last Train" by Michael Vincent, which is the shortest but definitely the one I found weirdest, in a good way.


While there are only two stories in the final section, "Return to the Light," they're both very nicely done.  I wasn't at all surprised by the pleasure gained from the slow-growing creepiness of Ramsey Campbell's "The Companion," but I was completely taken aback by  "A Short Trip Home" written by of all people F. Scott Fitzgerald.  I had no idea he wrote this sort of thing, but I was not at all disappointed.

It's difficult to describe what I look for while reading the weird or while reading strange/supernatural tales in general, but I know it when I find it,  and I think appreciation of this sort of thing reflects more of a personal, internal aesthetic.  Most readers (if you can go by the few ratings/reader reviews on Goodreads) seemed to enjoy this book, minus the one reader who referred to it as "pedestrian," an opinion I don't happen to share, but to each his or her own.   Overall, I have to say that my investment of time and money in the British Library Tales of the Weird series has paid off handsomely; the same is true of this book. While there were a few I didn't particularly bond with as is common in most anthologies, the majority of the stories here will delight any true-blue fan of older supernatural or weird tales.   It certainly delighted me.