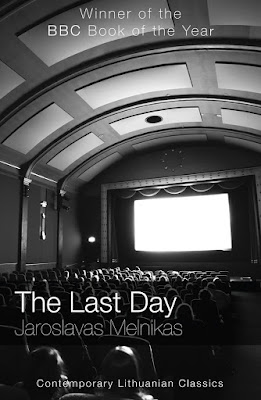 
"I had thought that I understood the essence of fate: it chooses forms of happiness and unhappiness for you. It's terrible and at the same time very simple."

My reading year for the most part has been amazing, and often it has been sheer chance that has helped make it so.   Around the end of March I was ordering a book at Book Depository, and while I've forgotten which book it was that I originally ordered, as soon as I hit the buy button, one of those "people who bought this also bought" things popped up with a gallery of cover photos.  The Last Day was the first of these, and after reading the blurb I hit its buy button as well.  It really was like buying the proverbial pig in a poke, as my Southern grandmother would have said, but there was just something about the descriptions on the back cover that intrigued:

"Jura finds that the favourite rooms in his house, each designed to reflect an aspect of his personality, are disappearing one by one.  He remembers perfectly well playing the piano in 'The Grand Piano Room.' However, the other members of his family deny the room existed."


"In 'The Last Day' a family discovers a book that tells them on which day one of them will die."

I ask you: how could anyone resist?


As the author says in an interview with Panel Magazine,  "in every situation, however concrete, that humans are involved in,"  he  sees "the commonality, archetypes."  His  stories work around the idea that "every moment in a person's life is powered by its particular logic," and he traces that logic "to its extreme," adding that "often it will pierce the limits of reality."    This is a fascinating concept, and throughout the eight stories in this book,  there are people who find themselves having to cope with some of the most bizarre situations, and then navigating their way into finding some sort of meaning or significance in what is happening.  The narrator in "The Grand Piano Room" offers an insight when he says that he is


"... not one of those people who only believe in reality to an extent: not totally, as it were. Though nobody could say that I wasn't a rational thinker. However, my reaction to the inexplicable becoming reality is not fast and is never hysterical.  I look at something like that primarily as a phenomenon; though it's not clear to me what has happened, it must have some inherent meaning."

These situations occur, as Vilnius Review (as quoted on the author's website) states, in "predictable spaces," but there is nothing at all predictable about them.  In  "On the Road" for instance, a man finds himself driving from place to place after one morning when an unknown "somebody" calls him telling him to go down "this street and that street to a particular spot."  When he gets there, there will be somebody else to tell him where he will be going next.   Up until that day, he says, his life had been his own, but now believes he is doing something "important;" his worry being that at some point his life "on the road" would end, leaving him alone in the world and having to start "living again."   Moving on to another truly great story, a series of decisions to be made faces the narrator of "A.A.A.," who ten years earlier had received a letter telling him that it was time for some "positive changes" in his life by making "a choice between fortunate and unfortunate events."   In the final story, "It Never Ends," life goes on in a movie theater, where "one's understanding of normal changed."

The Last Day reads like a photo album filled with existentialist moments caught and recorded for all time, related via allegory and metaphor.  And while the situations explored in these stories seem outlandish and extraordinary,  it's easy to empathize with many of the characters once you move into the frame of the logic at work in each tale.    It's a mind-bending, offbeat experience, to be sure, as well as one of the best short story collections I've read so far this year.  You probably won't come out of it the same as before you went into it.   It probably won't be for everyone, but if you are an outside-the-box reader, you will appreciate this one.   It is strange with purpose, the best kind.

definitely recommended for readers of the strange who want something well above and beyond the norm.