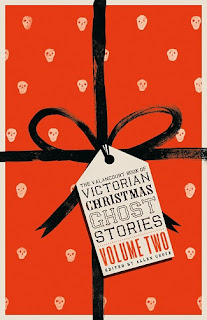 "For our own part, we believe in ghosts."
-- from "A Real Country Ghost Story," by Albert Smith

On December 22nd, I baked scones, brewed tea, snuggled up in my leather wingback chair and started reading. I'd had this book in my possession for a while, but I'd saved it, having made a plan to finish  the last few stories on December 24th, so that I could try to catch at least a tiny measure of the Christmas Eve ghost story feel. As it turns out, I did finish late on Christmas Eve, and the only thing that could have made my experience any better than it was would have a been a roaring fire with the sound of wood crackling and embers popping as it burns.


All of that was just ambiance though; it's fun to close your eyes and imagine, as editor Allen Grove says in his introduction (quoting from Henry James' The Turn of the Screw),


"a group of men and women sitting 'round the fire, sufficiently breathless' as they share strange tales in an old house on Christmas Eve."

The stories in this book are an excellent sampling of ghostly tales appearing in Victorian periodicals, ranging from some with darkly-comic edges to full-on hauntings to vengeful spirits.  I counted ten separate publications from which these fifteen stories were taken, including Bentley's Miscellany, The London Society Christmas Number, and Belgravia's Christmas Annual, to name only three.  And while that's all part of what makes this book special, the truth is that it can be read and enjoyed any time of the year by anyone who has a deep and abiding fondness for these old tales.  As Grove reveals,


"Ghost stories are meant to surprise and scare us, but at the same time their conventions bring a certain level of pleasure in their familiarity.  The stories here don't disappoint on this front,"

citing "vacant old houses" with cheap rents, "secret rooms and hidden staircases,"...and many other pleasurable chills and thrills.  And for me, there's the added attraction of discovering new stories "by little known or anonymous authors," whose work resonates in  "echoes"  found in  more "popular and influential writers of dark and disturbing tales."  (12,13)


The fifteen stories are as follows:

I loved each and every story, and there is not a bad one to be found in the entire book.  As far as personal favorites go, it's very tough to choose. In my top three are ""Wolverden Tower," for several reasons aside from the chills it produced,  "The Ghost of the Treasure-Chamber,"  its "doggerel" verse included (I love clue-like "doggerel" verses in stories), and  "Number Two, Melrose Square,"  which is referred to in the pre-story blurb as "one of the most accomplished and effective tales in this volume."  It is exactly that, and just plain creepy to boot.  Coulson Kernahan's  "Haunted" has that lovely ambiguity I crave, while  "Christmas Eve in Beach House" takes us to a "threatening Christmas Eve on that wild Cornish coast."  But as I said, I loved them all.

This second volume of Victorian Christmas Ghost Stories is a true treasure, and I just want to say to the Valancourt team how very much I appreciate all of the time and thought that went into the selections found within.  I know that the purpose of publishing books is to sell them, but James and Ryan go well beyond the commercial to bring into our homes books that they love, which is why I'll keep buying them.  Once again, they have outdone themselves.  Highly, highly, highly recommended.