The Twenty Days of Turin, by Giorgio de Maria 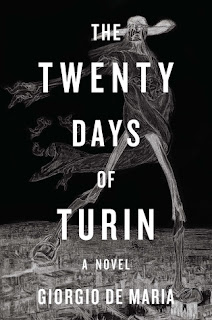 "The dark forces that seek to hold us back are far from vanquished."  -- 53

By the time I'd put this book down, I was actually shaking.  Not so much for the horror elements here, but more because of the feeling that this book, while written in the late 1970s, has a certain timeliness about it that terrifies me, one that is more frightening than the contents of any horror novel.


...neither a war nor a revolution, but as it's claimed, 'a phenomenon of collective psychosis' - with much of that definition implying an epidemic"

and actually, the word "epidemic"  seems an appropriate description for what follows as the twenty days are recounted through interviews and other media uncovered by our narrator. It was a time of drought, a time when men and women struggled with a strange insomnia that prompted them to "shamble" through the streets and plazas of Turin during the night.  Some witnesses reported strange smells in the air; others were disturbed by unworldly noises, screams that seemed to relay "some kind of message," with "always something gray and metallic deep behind it," ... conveying the "intonation of war cries...virulent and hostile." And then, of course, there were the strange murders that took place during this time, and witnesses who "made certain they didn't see anything."   It was as if the city was in the grip of unknown dark forces unleashed by the cosmos itself, blanketing Turin's citizens in terror to the point where, as our narrator discovers, people are still reluctant to discuss their experiences some ten years later.  And it is to get "behind that silence" that the narrator seeks to understand exactly who it is that is "hiding the mystery of the Twenty Days."

As he proceeds with his investigation, he begins to understand that there are forces at work who do not want him to succeed. The first warning comes after a visit to the remnants of the mysterious  Library, which, according to the narrator, must be part of any picture being painted about "Turin in the time of the Twenty Days."  It had been started with the idea of "encouraging people to be more open with one another," in which people could  collaborate in submitting "documents reflecting the real spirit of the people." They weren't looking for people to contribute works of literature ("there's too much artifice in literature"), but rather "a diary, a memoir, a confession of some problem that really worries you," with the promise that there would be someone who would be interested enough to read what you had to say, and then for a small fee, could get your address and be able to contact you.  Back in the present though, our narrator continues to be plagued by strange occurrences, including a murder, all part of an attempt to get him to back off.

I see this book in part as an allegory of the fear and upheaval that resulted from Italy's tumultuous "Years of Lead" a time when, as the translator notes in an interview at Weird Fiction Review


"People were scared of being killed as soon as they stepped out of their houses and also scared that the government wouldn't be on their side,"

which also became a "taboo-ish topic to speculate about too loudly."  On the other hand,  I can't get out of my head that since the narrator's real quest is, as he stated,  to discover who (or what)  it is that is "hiding the mystery of the Twenty Days,"  it seems to me that a very big part of this book reveals that those strange dark forces responsible for that dark time haven't disappeared, but are still there, lurking and hiding in the shadows, unseen and unknown, but still in control.

De Maria used the stuff and the language of horror fiction to tell an horrific story here, and it works, especially upon reaching the ending which seriously chilled me to the bone. One more thing -- there's been a lot said about this novel's prescience in De Maria's early vision of social media, and it is a big part of this story but don't let that be the only thing you get out of it.   There's much, more here -- as just one example, people turning to spirituality (including strange cults) as a sort of bulwark against the darkness,  and the translator in his introduction spends a great amount of time helping the reader to understand how the novel can be viewed as an artistic expression of the turmoil of an Italy in its years of great upheaval.  But skip the intro  until you've finished the novel, so you can experience the chills without any hints first.

I can see why this book is considered a cult classic, and while it may not be for everyone, I thought it was brilliant.