I am a sucker for a good ghost story, and over the years my shelves have started groaning as I continue to add more collections to my library.  I finally discovered the Pan Ghost Books series, the first three of which are edited by Lady Cynthia Asquith, and I'll definitely be revisiting some of these in the future, although others took their turn as editor after Asquith's three.  For more about these books, you can visit Tabula Rasa where Nick Kennett has a nice article (including contents!) about the series.

Twenty-seven stories are included in this little book, some of which  I've read before:  "The Ghost of the Valley", by Lord Dunsany,  Aickman's "Ringing the Changes," "The Tower," by Marghanita Laski, and "Poor Girl," by Elizabeth Taylor. Out of the remaining 23, several authors are familiar, although their stories were not:  Elizabeth Bowen, Mary Fitt, Elizabeth Jenkins, L.P. Hartley, and Lady Cynthia Asquith herself.  That leaves a total of 18 writers whose work I've never read, offering lots of possibilities for further reading (yay!).  The collection as a whole is not the greatest, but as I'm always saying, when you pick up an anthology it's bound to be a mixed bag where there are treasures and there are those stories that are not so hot.  Depending on the reader though, people's choices in each category will be different.

The entire table of contents is as follows, my favorites annotated:

"The Telephone," by Mary Treadgold
* "The Claimant, " by  Elizabeth Bowen,  my favorite story in this book.  A man and his wife inherit a home in the West Country from a relative in Australia who died intestate.  Their happiness is interrupted when someone writes about his intentions to claim the house, which he says has been left to him by his uncle, and then tells the couple that it is his inheritance, and that "no one shall cheat me of it."  Things get very weird after they learn he is flying out from Australia to set things straight.
"Napoleon's Hat," by Evelyn Fabyon
"The Bull," by Rachel Hartfield
"The House That Wouldn't Keep Still," by L.A.G. Strong
* "The Doctor," by Mary Fitt.  Set in the moors of Devon, a woman who loves the moors and long walks finds herself lost in the darkness.  Taking a short cut, she sees another woman coming towards her, who invites her to stay at her home for the night. Of course she's not going to say no, but later, I'm sure she probably wishes she had.
*"On No Account, My Love," by Elizabeth Jenkins, in which a young woman is keen to visit the empty house that once belonged to her great-grandmother, known as an "abominable old tyrant," who used it as a school for girls. Hoping to connect with her past, she "felt sure some contact" with her great-grandmother might be possible.  This one really doesn't hit you until the last sentence. Yikes.
"The Ghost of the Valley," by Lord Dunsany
"The Day of the Funeral," by Margaret Lane
* "Take Your Partners," by Ronald Blythe is both bizarre and creepy, in which a grandfather relates a strange experience to his grandson that took place at his first ball.  As an eighteen year-old, he was miserable being there until he met a young woman who seemed as unhappy as himself.  One of the better stories in the book, for sure.


"Someone in the Lift," by L.P. Hartley
*"The Tower, by Marganita Laski -- in an earlier post.
*"Ringing in the Changes," by Robert Aickman -- again, one of his best stories ever, a work of pure genius.
* "I Became Bulwinkle," by Jonathan Curling, is less a ghost story than a tale of terror involving a "third-rate conjurer" who received his "baccalaureate in black magic" while in Sierra Leone before returning home. It's a slow burner, but damn, it's good.
"Mrs. Smiff," by Collin Brooks
"Somebody Calls," by James Laver
*"Harry," by Rosemary Timperley -- I will say that this sort of thing has been done a number of times, but this is one of the best examples of the imaginary friend story I've ever come across.
"The Shades of Sleepe," by Ursula Codrington
"The Woman in Black," by Daniel George
"A Laugh on the Professor," by Shane Leslie
*"Poor Girl," by Elizabeth Taylor.  As I said in another post, this one's just flat out creepy on more than one level. Just thinking about it is giving me the willies.
"The King of Spades," by Nancy Spain
"The Uninvited Face," by Michael Asquith
"Remembering Lee," by Eileen Bigland
"Who is Sylvia," by Cynthia Asquith 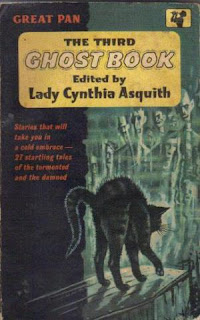 While I can't promise that each and every tale will produce goosebumps, there's probably here something for everyone who enjoys these older stories. For  me it's all about discovering those obscure, long-forgotten authors whose work has just sort of faded away, and in that sense, this book was a goldmine.

recommended for strange, nerdiferous people like me who revel in the older stuff.  I know you're out there.