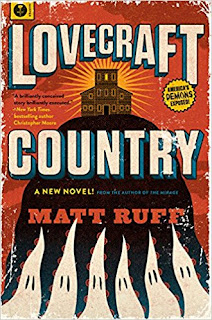 The first clue that this is not going to be your average Lovecraftian pastiche or rehash is on the cover -- what some people may see as ghosts or white spaces between tentacles actually bears much more resemblance to the white hoods of the KKK.  In fact, if you're thinking this is going to be Lovecraft redux, you seriously have another thing coming.  While his own particular brand of racism was horrific in itself, anything that Lovecraft produced in his fiction is dwarfed here by  the real-life terror that the characters in this book experience in their daily lives in Jim Crow America of the 1950s, and that little yellow, starry-looking thing on the cover that says "America's DEMONS Exposed" certainly isn't just there to add to the cover art.

The book begins with an army vet, Atticus Turner,   leaving Jacksonville for Chicago,  driving 450 miles the first day nonstop except for getting gas. With his copy of The Safe Negro Travel Guide in hand, Atticus spent that night in Chattanooga, where the Guide showed that there were "four hotels and a motel, all in the same part of the city." The next day, wanting to "put the South behind him," he has the diner next to his motel fill a basket with food and Cokes so that he wouldn't have to stop in Louisville, Kentucky where again according to the guide, there was a "restaurant that would serve him lunch."  An hour after crossing a "bridge named for a dead slave owner" on the Ohio River, he blew a tire, sending him on foot out to find a garage..  Just his luck -- a Confederate flag hangs over the entrance and, of course, that didn't quite work out.  Pulling out his Safe Negro Travel Guide once more, he discovers that the nearest "Negro-owned garage" was fifty miles away; with no other options, he had to wait seven hours for help to arrive. And this is all just the beginning of worse to come.

So at this point (and I'm only on page four), I'm already creeped out about the necessity of something like a  Safe Negro Travel Guide, and after a little digging, came across the story of The Negro Motorist Green Book, and now I'm really interested to see what else Matt Ruff is going to do here.  I just sort of sat flipping pages as the real horrors of the  lives of the characters unfolded in each of the interconnected stories in this book.

The way Ruff sets up this book is clever -- as he notes in an interview at The Seattle Review of Books,  his idea was to start with "classic story" ideas


"... like, somebody buys a haunted house or somebody finds themselves being chased by an animated doll"

and with that, he asks himself the questions of


"how does this happen to my protagonist and how does having a black protagonist change the nature of the story?"

Without giving away too much of what happens here, Atticus has returned to Chicago after receiving a letter from his dad Montrose in which he reveals to his son that he's discovered "something about your mother's ... forebears," and that there's some sort of "legacy, a birthright" that's been kept from Atticus, something that "has something to do with the place that Mom's people supposedly came from." Now Montrose has gone missing, and Atticus has only the letter he was sent as a clue to finding him.   From that letter, it turns out that "Mom's people" came from Ardham, Massachusetts, in what Atticus calls "Lovecraft Country."  Atticus, his Uncle George and a friend from childhood named Letitia Dandridge set out for Ardham, and encounter the Braithwhites, who have a strange connection with the Turners through "Mom's people."  The Braithwhites are white,  rich,and powerful; they are also key figures in a strange group known as the Order of the Ancient Dawn. (I have to say that my pulp-loving heart went pitterpat here with this name.)  I won't say why, but what happens during their time with the Braithwhites at this meeting sets up all that follows in this book, during which we come to understand the phrase "Lovecraft Country", as one reader puts it, as having


"more to do with the rampant racism in that part of the US at the time, rather than the Lovecraftian horror subgenre."

The way that Mr. Ruff has brought out his story here is very nicely done, and the little "mini-adventures" do, as he also notes in the Seattle Review of Books interview linked above, turn out to be each character's "own weird tale." Some of these are much better than others -- I loved "Horace and the Devil Doll," for instance because it's so on point as far as old-fashioned pulpy horror is concerned -- but really,  each story added to a wider picture of  Jim Crow practices of this time, things that, as anyone sane would realize, were just horrific and inhuman.  At the same time, there's a very real sense of empowerment that comes from the characters in each story in some fashion, as they fight back as best they can, each in his or her own way.   Speaking of pulpy/horrorish tropes here,  Ruff obviously went well beyond Lovecraft in framing his tales -- HG Wells, Ray Bradbury, Robert Louis Stevenson and many more authors find their way into this book as well.

I have to say that on the whole, I liked this book, didn't love it and maybe that's not entirely the author's fault.  Not too far into it, I was reminded in a very big way of what Victor LaValle had done with his excellent  Ballad of Black Tom which uses Lovecraft's own work "The Horror at Red Hook,"  to turn Lovecraft's particularly nasty brand of racism on its own head, so (and I hate that this happens, but I can't help it), there was already a comparison at work in my head. Frankly, when it comes right down to it, LaValle's book, in my opinion, is the better of the two, since  LaValle is hands down, no question,  the better writer.  Having said that though, I don't  mean that readers won't like this one --  there are plenty of reasons to recommend Lovecraft Country to anyone, especially since it seems to be sadly pertinent to our own times.

for more in-depth coverage of this book, I give you