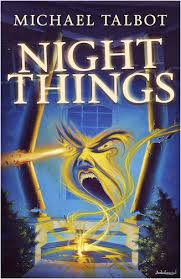 "They say Lake House draws evil like a magnet."

I just can't help myself -- I can't resist a good haunted house story. I have no clue why, it just is what it is.  Shirley Jackson's The Haunting of Hill House is at the top of my list, followed by  Nazareth Hill by Ramsey Campbell, these books, and many, many more. It's all about the atmosphere and the surprises that people discover inside, both of which are part and parcel of Night Things, with the added bonus of an eerie mystery at its very core.

The action begins when Lauren Montgomery, her young 11 year-old son Garrett, and Lauren's new rock star husband Stephen Ransom rent a house in the Adirondacks for the summer. It's not just any house, either -- Lake House was built in the 1890s by Sarah Balfram, who, as the story goes, lived there in complete isolation after being jilted by her fiancé. With 160 rooms, it sits on two hundred acres of land, complete with lake -- very much cut off from everything and everyone for miles.  As Stephen tells Lauren as soon as they enter the place for the first time, it's not a "normal house"; evidently Sarah was a wee bit eccentric and  had


"strange things built into the house -- stairways that go nowhere, hallways that end at blank walls,"

reminiscent of California's Winchester Mystery House.  This place, though, is no  tourist destination -- it's been the scene of several violent murders in the past, something Lauren doesn't know at the time of their arrival, but will soon discover.  Garrett, a naturally-curious child with a fascination for science combined with

a belief in UFOs, ETs, and all things strange, is fascinated about the "unknown vastnesses and further architectural oddities" the house may be hiding, "so evocative of old horror movies that he fancied just about anything might be hidden in its innumerable closets and passageways."  While exploring the place on his own, he discovers that "the layout of the house had a curious rhyme and reason" -- evidently it had been "designed to prevent anyone from venturing too deeply into its inner recesses." This starts him wondering why Sarah Balfram may have had the house built this way, as he sees it, meant to "control and influence the route a person took through her house. " He also begins to question what would happen if somehow he could "travel deeper into its interior."  As Garrett and Lauren soon discover, the house itself is, as the back-cover blurb notes, a "labyrinthine puzzle," complete with rooms that are filled with strange oddities, but also  cause disorientation and dizziness.  The two take their own tour through the place, and after a while Lauren comes to believe that the stronger the effects caused by the rooms, the closer she was getting to "whatever it was that Sarah Balfram had gone to such great lengths to conceal."

The mystery is slowly revealed around the story of the dynamic of a strained family relationship, as Lauren finds herself caught in the middle between her new husband and her son.  It's a good book and it had me going right up until the last section when this family tension causes Stephen to take off,  leaving Lauren and Garrett behind.  With no car and the two stuck in the middle of nowhere, Talbot had a great opportunity here but in my opinion sort of missed it with how he ends the novel, which I won't disclose. Let's just say that I get it and the mystery of the house is solved to my great satisfaction,  but  I felt that rather than making the final reveal a bit more in keeping with the creepy atmosphere and the ratcheting suspense up to this point, Talbot's  final section was more of a standard '80s horror fare ending.  And before you say "well duh - it was written in the '80s," what I'm trying to say here  is that having read his Delicate Dependency,  I think Talbot was capable of much more than he gave me here.  Still, I can't complain,  since in any book it's all about the journey for me, and it was a really good one all along the way and I had a LOT of fun with it.   I'd certainly recommend it to other fans of haunted house stories and to people who enjoy their horror on the tamer side.