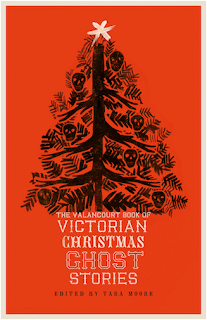 " ... What is their use; what good ever comes from these departed souls' revisiting the glimpses of the moon, and by sights, signs, or sounds, holding converse with us of the visible world?"
--  W.W. Fenn, "The Haunted Rock," 200

Fenn poses a very good question here, one that is answered in different ways throughout this collection of Victorian Christmas ghost stories,  a mix of thirteen (of course!) tales. The Valancourt crew has outdone itself with this book, and editor Tara Moore should also be given major pats on the back for her outstanding work here.  Each story begins with a brief introduction to the author, along with a brief note or two as to where his or her story first appeared in print.  And for people like me who are afflicted with full-on geekiness, every now and then there's the added bonus of footnotes providing references for further study.

According to Tara Moore, author of Victorian Christmas in Print [which you can read about here and which I would seriously kill to own but (and with sincere apologies)  at its current price that just won't be happening] writes in her introduction that

"The season of Christmas coincides with the shortest days of the year, and for middle-class Victorians, a chance for families to reconnect in story-telling circles. Urban dwellers, disconnected from village legends, simply picked up a magazine specially made to lace children's dreams with terror. The bleak, shadow-filled walk from the story circle to one's dark bedroom presented an uncomfortably eerie space to reflect on the mental images conveyed by those grisly tales."

She also reveals that ghosts were not a product of the Victorian era  -- they had been "a staple of both periodicals and Christmas for a century before the Victorian Christmas publishing boom."  When taxes raised the price of periodicals, "ghosts resorted to starring in oral accounts." It was a tradition shared and enjoyed by the poor as well as the rich.   The 1820s and the 1830s saw the rise in popularity of the Christmas literary annual, and special periodicals began to appear, their publishers either printing "special Christmas numbers or simply tailoring their December and January numbers for Christmas reading, and that meant ghosts."    One more interesting factoid and I'll move along:  women were huge contributors to ghost-story literature, producing "between fifty and seventy percent of all ghost fiction from the nineteenth century."


On with the stories now.  True-blue fans of the Victorian ghost story will recognize the names of most of the authors whose work has found their way into this collection, and there are also four "anonymous" contributions.   While I won't go into any sort of description for any of these tales, the table of contents reads as follows:

For avid readers and aficionados of eerie classic tales, this collection is manna from Victorian ghost-story heaven.

Snuggle up with a cup of your favorite hot brew, wrap up in a cozy blanket, light a fire in the fireplace, and prepare to be transported out of this world and back through time.  This is the ultimate perfect book for Christmas reading, but it's also ideal for any other time of the year. I have the hardcover edition, but it's also available in paperback and there's a Kindle version as well.  It is a lovely book, and most definitely now a treasured part of my own personal collection.
Posted by NancyO at 8:58 AM