Jottings From a Far Away Place, by Brendan Connell 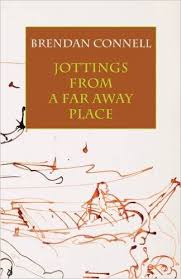 paperback (my copy from the publisher, thank you!)


I am beyond indebted to Snuggly Books (love the name, by the way!) for sending me a copy, and I loved it so much that after I read the book, I bought a brand-new one.  If you ask me why I loved it so much, I don't really think I could explain it -- I just did.  I'm not even shelving this book -- it sits out on my desk and I still (after having finished it some time ago) flip through its pages randomly from time to time.  There are  certain books which just sort of speak to me, and Jottings From A Far Away Place is definitely one of those.

I'll confess that I've never read anything by Brendan Connell prior to Jottings, but when I posted a brief wow on Goodreads to hold the spot where my thoughts should go, people started giving me advice on this author's must-read titles. Looking into these books, I realized that Jottings is a completely different animal to the ones that were recommended; quite frankly, unless I count the many Chinese-language works I had to translate during my tenure as grad student, it's a completely different animal to pretty much anything I've ever read. It has that same sort of floaty atmosphericness (okay, I know that's not a real word, but it works) as those works, and "jottings" is a great title word here -- it particularly reminds me of a work I read by a Ming Dynasty scholar called "Little notes on the Nature of Things." Then again, it also has a bit of a Buddhist flavor, but this collection is anything but a ripoff of Eastern philosophy.

The blurb says that in this book you'll encounter (among other things)  "a bloody episode with Countess de Báthory, a recipe for cinnabar sauce, and the story of a man who has been reincarnated as a spoon."  The spoon story, by the way, has one of countless great lines to be found in this book -- so cool that I marked it:


"A man without God or love has little to complain of when he finds himself reincarnated as a piece of fine silverware."

Please don't ask me why I think that's a great line, because truthfully, I don't know, but somehow, somehow, there's a lot of wisdom in that statement in an offbeat, off-kilter sort of way.  Now, you might laugh or raise an eyebrow wondering if  I'm totally nuts for thinking that or if I happened to read this book while stoned,  but that's exactly what this book did in my case -- it caught me completely off guard over and over again due mainly to its strange randomness and little wordbites that for some weird reason that I can't fathom made complete sense to me.   For example, there's a particular story I liked in here about an Indian (Indian from India) ascetic who just couldn't get over the fact that a particular holy man who had crossed the river with an unclean prostitute continues to be so loved.  It starts, and then the author turns his attention to  other "jottings," and in the middle of a story about a terrible king who imprisons his daughter, the Indian story picks up again.

So, here's what I'll say about this book since I stink at trying to pull things apart and get all literary-intellectual about things: It is so cutting edge cool without trying to be -- and I just loved it. Jottings From a Far Away Place  may not be everyone's cup of tea, but the back-cover blurb on the ARC I received says the following that really fits how I see it:


"A book that is like a collection of bulletins from the world of dreams,"

to which I will add that if you are a reader who appreciates what certain authors do with language and style without trying to be in-your-face clever about it, this book will blow you away.  Don't expect anything and you will be extremely surprised and happy.

Dear Snuggly Books: I hope it sells thousands and thousands of copies. It's that good.
Posted by NancyO at 2:07 PM

Email ThisBlogThis!Share to TwitterShare to FacebookShare to Pinterest
Labels: 2015, strange but wonderful