Che vuoi? That is the question: The Devil in Love, by Jacques Cazotte 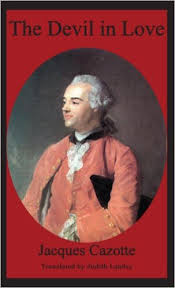 After a short bout of food poisoning I'm back with The Devil in Love, by Jacques Cazotte, who (as the story goes), predicted whom among his friends would be meeting Madame Guillotine as the horrors of the French Revolution unfolded; sadly, his prescience didn't include himself.

I was very much looking forward to reading this short book, but when I opened it and saw this illustration, 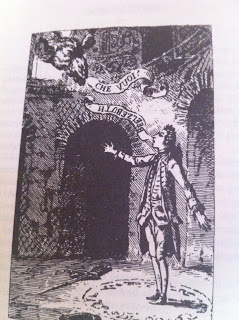 I knew instantly that  I'd seen these words before ("che vuoi?" -- what do you wish?)  so after some research online,  I went to my library of stuff no one else would ever read but me and dug out my copy of Écrits, by Jacques Lacan (1981) and sure enough, there they were.  It's not like you need to get Lacan's theory to understand The Devil in Love,but Lacan's work offers a clue as to how to approach the story. I'm a lazy person at times, so instead of rereading the whole shebang, I found a link to an online intro on his stuff.  Distilling it down from that page, what's relevant here is the idea of


“man’s desire is Other’s desire”: the subject desires only insofar as it experiences the Other itself as desiring, as the site of an unfathomable desire, as if an opaque desire is emanating from him or her. The other not only addresses me with an enigmatic desire, it also confronts me with the fact that I myself do not know what I really desire, with the enigma of my own desire."

That absolutely put Cazotte's work into perspective for me here, but since someone might want to read this little gem of a book and may not agree with how I see it, I'll leave it there for now.

The Devil in Love is narrated by the main character, Don Alvaro, a Spanish captain in the king's guard at Naples. When his company ran out of money for gambling and chasing women, they would "philosophize in our own quarters," and one evening, the subject of conversation turned to "the Cabbala and cabbalists."  Most of the group agreed it was "a mass of absurdities, a source of knavery, fit to dupe the credulous and to amuse children," but  the men eventually cleared out, except for Don Alvaro  and an older Flemish guy, Soberano, whose talk on the subject interests Don Alvaro enough that they meet up again.  Soberano leads Don Alvaro to believe that he can "give the spirits orders," and the young captain tells his friend that his "dearest wish" is to do the same.  He is told that it will take at least two years for the "necessary preparation", but Don Alvaro eventually gets his way after bragging that if he met the Devil himself, he'd pull "his devilish ears."  He is given the opportunity, told what to do, and sure enough, he summons the devil himself in the form of a camel's head, who on being summoned asks "che vuoi?." Our hero is petrified, but somehow manages to get over his terror enough to start commanding the Devil himself; his first order is that the camel transform into a spaniel.  This is only the beginning of several transformations that occur in this book; the spaniel then transforms into a young page named Biondetto who becomes Don Alvaro's servant.  Biondetto eventually becomes Biondetta, a beautiful blonde who has to the power to thoroughly distract Don Alvaro.  But let's not lose sight of the fact that the title is "The Devil in Love..."

However you choose to read this very short book, it is a delight from beginning to end; the ending itself leaves much pause for thought and actually sent me back to the start for a second read.  The short of it is that questions of gender identity, sexual desire, reality vs. nonreality, and much more  make their way through this tale; however, it's also a book that's just a fun read that I can definitely recommend.

This coming year I plan to spend a LOT of time with Dedalus classics -- this is just the first of many.