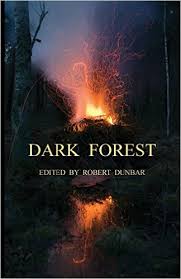 "Perhaps, since the poisons in the air and water, even in the earth itself, are killing other life, perhaps nature has made room for something else, something that's been pushed aside."
-- Robert Dunbar, "Wood", 413

Dark Forest is the creation of writer Robert Dunbar, and it is the first of his books I've read. He's written several others; his latest offering is The Streets, which is part three of his Pines trilogy (The Pines, The Shore, The Streets).   Dark Forest brings together a number of stories from writers who should already be household names among the ranks of serious readers of  horror, including such literary luminaries as  Algernon Blackwood, Ambrose Bierce, and Arthur Machen.  Moving into the modern world, Dunbar's novella "Wood" caps off this collection.  In this book nature itself is a sentient force, and has had enough of encroaching interlopers and humans who are screwing it up; yet, as Dunbar notes in his own contribution, there may be hope on the horizon.  I'm actually blown away at the short-story selections in this anthology -- as usual, some are much better than others, but the main theme that binds this collection together is very well represented throughout the book:  the "connection between the natural world and ...something other."   As noted in the introduction,


"Something deadly lurks among the shadows, and the trees themselves seethe with menace. No one is safe."

Part One: The Soul of a Place
"The Willows," by Algernon Blackwood
"A Vine on a House," by Ambrose Bierce

Part Two: Green Hell
"The Terror," by Arthur Machen
"The Orchid Horror," by John Blunt
"The Pavilion," by E. Nesbit

Part Four: The Final Embrace
"The Man Whom the Trees Loved," by Algernon Blackwood
Wood, by Robert Dunbar

Each story opens with an "Introductory Note" by various authors (including Ramsey Campbell!) that gives the reader a feel for what's coming, and every now and then the editor interjects brief footnotes which add food for thought. 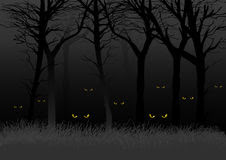 As Dunbar writes in his introduction, "There are places in this world where it is safer not to venture," and you'll definitely find them in this well-crafted anthology.  Super book.