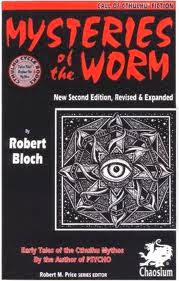 "This world is but a tiny island in the dark sea of Infinity, and there are horrors swirling all around us. Around us? Rather let us say amongst us. I know for I have seen then in my dreams, and there are more things in this world than sanity can ever see."  --The Soul of Chaos, Edgar Henquist Gordon

When I was a kid, aside from any and all mystery books I could get my hands on,  I  pretty much eschewed the standard kid-reading fare and spent hours in the library devouring the pulpy and the strange.  The more far out there it was, the better for me. Mysteries of the Worm made me think back to a lot of the strange Egyptian stories I read and loved -- mummies returning for vengeance, strange curses that fell on people who opened tombs, etc. Not that this sort of thing encompasses all of Bloch's writing in this book, but what is there, even though maybe not the best examples of his work, left me with inner squeals of delight, as did the rest of the book.  Robert Bloch was not just the author of Psycho, the book most people would associate with him, but early on in his career, he joined the ranks of the "Lovecraft Circle," which as Lin Carter notes was a


"band of aspiring or season writers scattered across the country whose common links were their enthusiasm for macabre fiction in general and Weird Tales in particular, and their friendship with Lovecraft."

Judging by what I've just finished reading, and by books I've already read, there is  no doubt that he made sufficient contributions to the "tales that define the mythos," as the cover blurb notes about this entire series of books.  While perhaps they're not the most bone-chilling of stories as a whole, a) they're fun and b) it's really interesting to watch the development of Bloch's writing over time in this volume from being a producer of Lovecraftian pastiche to coming more into his own both in terms of story and style.  A big thumbs up on this book.

Exploring the table of contents, there are sixteen short stories that make up this volume, as well as an introduction by Robert M. Price, an afterword, and a short piece by Lin Carter, "Demon-Dreaded Lore."  Here we go:

"The Secret in the Tomb" finds the eldest son of the current generation of a family of "sorcerers and wizards" from the olden days in the "nitrous-fungus bearded portals of the family vault." He is determined to be the one who finally thwarts the curse of the long line of eldest sons, by meeting whatever is behind the iron tomb door.  Here, that "pinnacle of literary madness, Ludvig Prinn's Mysteries of the Worm makes its first appearance.  Next up is "The Suicide in the Study," the story of  James Allington, whose library consists in part of such tomes as the Necronomicon, the Mysteries of the Worm, "the Black Rites of mad Luveh-Keraph, priest of Bast," and the Cultes des Goules, by the Comte d'Erlette.  Allington undertakes the "greatest experiment man has ever known," trying to manifest his dual personality in physical form.  Not one of Bloch's best, but still fun.  In tale number three, The Shambler from the Stars," a writer of weird fiction wants to write a "real work of art" with "new subject matter, truly unusual plot material." He settles on Prinn's "Mysteries of the Worm" as inspiration, and decides to test it out on a friend in Providence.  Bad idea.  There's a fun bit of info about the back-and-forth that this story created between Bloch and Lovecraft.  "The Faceless God" is the first of Bloch's Egyptian stories in this volume,  which when all is said and done is great fun.  Here, an unscrupulous smuggler of antiques stops at nothing to discover the location of a statue buried in the sands of the Egyptian desert. Sadly for him, the native crew he hires to help him find it and bring it home knows that the idol of the "Old God" Nyarlathotep is bad business -- and he is left to suffer the consequences.  Memo to self: when the natives try to convince you of something, you should probably listen. Moving on, "The Grinning Ghoul" finds a helpful psychiatrist trying to help a college professor whose dreams not only were the cause of "uncontrollable melancholia," but were also interfering with his work. After some time, the patient finds the physical locale upon which his dreams are based, and the shrink, thinking of the monograph he'll write afterwards, follows him into a cemetery and into a mausoleum. What he finds there will explain why he's writing this tale from a sanatorium for mental cases.  "The Dark Demon" also deals in dreams, this time those of  an author whose writing is based on them. Things start to get weird when he tells a friend  that he has been designated as a Messiah for the Dark One  who dictates what's in the books through his dreams; they get even weirder on May-Eve when the friend finds Edgar Henquist Gordon dreaming on his couch. 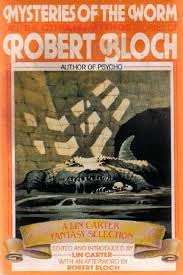 "The Mannikin" is one creepy story, albeit with a familiarish ending,  in which a teacher bumps into a former student named Simon Maglore while vacationing in a small rustic village on a lake.   Simon had left school some time back when his parents died, coming back to the small village to live in the family home. The teacher discovers that the villagers have very little to do with Simon, or indeed his entire family, who were all born with a  "physical malformation" of some sort and associated with the foulest evil.  Wanting Simon to leave the place because of its "unhealthful atmosphere," he pays him a call along with a doctor, but let's just say this isn't a case that medical science can help.  Next up is "The Brood of Bubastis," one of my favorites in this book.  This one is downright ghoulish and produced a little spine tingle or two while I read it. A man who has developed an abnormal feliphobia and taken himself away from everyone relates this tale of events during a visit to his college friend Malcolm Kent in Cornwall, in "a region of mystic mountains, cloud-haunted hilltops, and purple peaks that towered over wild forest glens and green-grottoed swamplands."  It seems that after reading Prinn's weighty tome and checking what he found there against other archaeological texts, he's discovered that the Egyptians had once colonized Cornwall.  But he's made another discovery that he wants to share with the narrator, one that can be found by entering a "sinister slit in the ageless rock."  This story is downright weird in a bizarre sense of the word. I loved it.  Moving from the Cornish countryside to Arkham, Massachusetts, "The Creeper in the Crypt" finds a handful of gangsters who unbeknownst to them, are trespassers in a beyond-haunted house with an iron door in the cellar. The spookiness here is in the house's story rather than in the tale. Next up is "The Secret of Sebek," another personal favorite that takes place during Mardi Gras in New Orleans. A writer working on a "series of Egyptian stories" during the day strolls through the partying crowds at night. On a quieter street, a man named Henricus Vanning dressed in an Egyptian priest costume stops him for a light and recognizes him.  Vanning, who professes an interest in the occult and in Egyptian lore, invites him back to his house where he is giving a costume ball which immediately reminds the narrator of Poe's Masque of the Red Death.  Stranger things are about to happen though, once Vanning takes him to meet his small, like-minded coterie of friends who call themselves The Coffin Club, who have something strange to show him. Aieee! This little tale really grabbed me, but "Fane of the Black Pharoah" was even better.  Retired Captain Carteret who served in Egypt during wartime is fascinated with secret lore, especially with the legend of Nephren-Ka, the Black Pharoah, who through Nyarlathotep, had been granted the gift of divination.  One night opportunity knocks on his door in the form of Arab holding the Seal of Nephren-Ka, and  the captain is given the chance to visit the Black Pharoah's secret crypt -- and watch his destiny unfold. 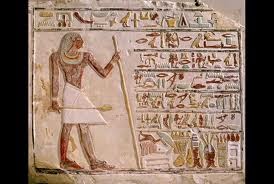 "The Sorcerer's Jewel" finds a photographer looking to do something different in his work and his friend providing him with just the ticket in the form of a strange jewel.  This story was okay; as in "The Mannikin," the core of this tale has been done before.  Things take a slight turn toward the different with "The Unspeakable Betrothal," in which a young girl living with an aunt and uncle is drawn toward an open window resulting in what seems to be a mental breakdown. The relatives have it boarded up, and the girl is taken away for a rest cure.  As an adult, she returns to her childhood home, where she is watched over by her fiance. But the window is calling to her again, or rather, what's outside of it.  I liked this one -- very atmospheric with a very strange, bizarre ending.  Next up is "The Shadow from the Steeple," one of Bloch's better pieces, which as the intro to this tale notes, is a sequel to HPL's "The Haunter of the Dark" , which is in turn a sequel to Block's "Shambler from the Stars." The death of close friend Robert Blake (his fictional alter-ego created by HPL) prompts a 15-year arduous investigation by his friend Edmund Fiske, who was not satisfied with Lovecraft's explanation of events in his story and is determined to get to the truth. "Notebook Found in a Deserted House" reminded me a lot of Lovecraft's "Whisperer in Darkness," in a story set way out in the woods where a young boy grows up listening to his grandma's stories about "them ones" who hide in the swamps and make sacrifices.  Excellent creep factor in this piece. This is followed by "Terror in Cut-Throat Cove," set in the Caribbean. A treasure seeker anchors off the island of Santa Rita looking to locate and plunder an old Spanish ship that had sunk there hundreds of years earlier. The beauty of the man's girlfriend is enough to entice the local expat American to become part of the expedition, but they find much more than they bargain for. There's enough suspense and eeriness to this tale to make it work well, but the ending is simply outstanding.

Once again, Chaosium has come through with an anthology of stories where the good tales far outweigh the not so great ones.  Definitely a no-miss not only for weird-fiction readers, but also for anyone who enjoys Bloch's writing in general.  What a great group of tales!