Madam Crowl's Ghost and Other Stories 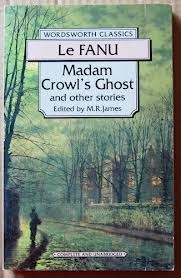 Madam Crowl's Ghost and other stories contains twelve supernatural tales that might be best be read late at night when the house is quiet. Even Henry James agrees: there's a statement by James on the back cover that reads

"There was the customary novel by Mr. Le Fanu for the bedside; the ideal reading in a country house for the hours after midnight."

The book is a mix of Victorian ghost stories, haunted houses, and tales based on Irish folklore.   These aren't perhaps the best ghost stories I've ever read, but Le Fanu is a master of  atmosphere, which helps to  produce the sense of dread or doom I look for when I read these tales.  For the ghost-story aficionado, this collection is definitely one not to miss.

Since this is not  a literary blog, and because I am not at all skilled in literary analysis, you won't find that here; there are, however,  lots of places on the Internet where people get much more in depth with Le Fanu and his ghost stories than I ever could. 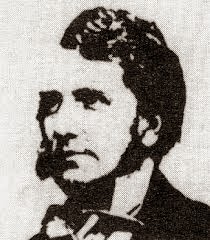 "Wicked Captain Walshawe of Wauling." This story has a particular frightfulness that creeps up on you slowly, and it's one of the better stories in this volume.  Captain James Walshawe (who wasn't really a captain except by "courtesy," married an heiress named Peg O'Neill, who had been living in a nunnery.  Peg eventually dies, and she is attended by "some half-dozen crones..." and her maid Moll Doyle. Peg had been laid out in a "strange brown robe," holding her rosary and a burning candle, which the Captain took out of her hand, and flung at Moll Doyle.  She tells him it was the "holy candle," and he accuses her and the others of witchcraft.  Moll sends him out with a curse. Some forty years later, the Captain, who  "hated nearly everybody" dies, and one of his cousins, uncle to the narrator, is summoned to the funeral.  He also wants to look around the estate, but he will eventually regret ever going there.  In some ways, this story runs along the same lines as "Squire Toby's Will," but is definitely much better.
"Sir Dominick's Bargain: A Legend of Dunoran." In the south of Ireland, the narrator who has come there for business took a long, twenty-five mile horseback ride, a journey "By bog and hill, by plain and ruined castle, and many a winding stream."  At the end of one day, as he's ready to find a place to rest, he notices a ruined house halfway up the mountainside. The name of the place is Dunoran, "a grand house in its day." He meets a hunchbacked man who tells the narrator a very strange story about Sir Dominick's proverbial deal with the devil.  Normally, these deals-with-the-devil type of stories are pretty formulaic, where good triumphs, but you're in store for something just a wee bit different here.  I liked this one.
"Ultor de Lacy," is one of the strangest and saddest stories in this book, and tells of the last members of a family of Jacobite lineage. The past reaches out to confront the present here in this eerie tale of Ultor de Lacy and his daughters Una and Alice.  When  Ultor is implicated for treason in the Rebellion of '45, he flees to France, but sneaks back every now and then to see his daughters. They are also watched over by a priest who comes to visit every so often, up until one day when try as he might, he was physically prevented from reaching the girls. The locals think the old castle where they live is haunted, so they're left on their own.  Eventually Ultor comes up with a plan to save his family from complete ruin, but what's really going on in the castle could thwart any hopes he has.
"The Vision of Tom Chuff." Another personal favorite, this story is a little like "The Sexton's Adventure," in that something causes the main character to give up his vices and change his ways. Unlike "The Sexton's Adventure" though, this one is pretty frightening.  Tom Chuff, local poacher, drunkard and wife beater, arrives at his little house one evening and after his third dram of spirits, passes out in a chair by the fire. His wife and children are petrified that Tom his dying, when a "death-like pallor came over his face" and he didn't respond to her cries.  The doctor arrives, and sticks Tom with a lancet and no blood comes out. Twenty minutes later, however, Tom comes to, and the narrator reveals that he'd had a most disturbing vision. What he saw in that vision chilled him to the marrow enough to inform his wife that he'd become a changed man.  But then again...
"Stories of Lough Guir" are again, like "Ghost Stories of Chapelizod" bits of folklore the author picked up from his childhood from local storyteller Anne Baily of Lough Guir.   The first story in this collection, "The Magician Earl," is about the Earl of Desmond and his lovely bride who, due to the wife's inability to stay quiet, find themselves living in a submerged castle. The second story here is "Moll Rial's Adventure, connected to the "Magician Earl." Moll Rial, old when Anne Baily was a child, used to be a washer woman. One day she saw a gentleman walking toward her, who offered her a ring from his finger as a "reward." Luckily she didn't speak to him or things could have been very bad.  And what Irish folklore would be complete without "The Banshee," which Miss Baily herself once experienced.  "The Governess's Dream" has Anne's governess recounting to her pupils a very strange dream. It was so intriguing that she took the girls to the old castle nearby to carry out instructions from the dream.  Finally, there is "The Earl's Hall," that takes place in the same castle with the same governess, but this time, she's visited by a strange apparition.

While these stories aren't a complete set of terrifying tales by Le Fanu, they've been enough to whet my appetite for more. Most of these tales have to do with vengeance of wrongs brought forth to the present because of actions of someone in the past, while some are folkloric in nature. My favorites are the stories set in among the hills of Ireland, largely because Le Fanu steeps these  tales in atmosphere from the outset.  I also noticed that in many or most of these stories, there are clues at the very beginning that lead the reader toward the climax -- when all is revealed.

While I have all of Le Fanu's novels, I've never before ventured into his shorter tales, but I must say that they are very satisfying for someone like me who loves a good ghostly yarn. As I read this book, I could envision people sitting near a fireplace in a darkened room listening to someone tell these ghostly tales and feeling chills run up and down their respective spines.