Continuing on in my month of spooky reads in honor of Halloween, I now come to two books written by the same author. The Shining is a classic horror read, while the latest book by Stephen King, Doctor Sleep,  hones in on the kid from The Shining, Danny Torrance, picking up his story again as a young man. I hadn't planned on reading The Shining again (it made for some freakishly-great entertainment years ago), but because Doctor Sleep builds on Danny's (now Dan) experiences at the Overlook,  I decided to reread The Shining before I started the new one.  To be frank, I liked both books; to be even more truthful, I fell in love with The Shining all over again and found Doctor Sleep to be fun and often suspenseful but not nearly as intense as its predecessor.  More on that later.

Before I try to offer up a synopsis here, let me say this: if you're considering reading Doctor Sleep, the references back to events in The Shining come from the original book -- which is not at all the same as the movie made by Stanley Kubrick.  So if your understanding of things comes from that film, you might be a little lost.

Jack Torrance, his wife Wendy and their son Danny used to have a good life. He taught at a prep school, he made money from publishing some of his stories, and Wendy did typing part time -- all good enough to where the couple could put money away each month.  Jack is an alcoholic, but had managed to get himself together and keep it under control, but he has temper issues: an assault on one of his students put Jack out of a job and drove Jack and Wendy into financial crisis.  Luckily, one of his former drinking buddies has found him a job as the winter caretaker at the Overlook Hotel high in the mountains of Colorado.  Jack sees the job as a good opportunity to finish writing a play he's been working on, since the Torrance family will be the only inhabitants there.  The truth is, Jack and Wendy have no choice but to take the job due to extreme financial necessity -- as Jack notes sarcastically some time later in the novel, "A man with his sterling record of alcoholism, student-beating and ghost-chasing would undoubtedly be able to write his own ticket," ending up with a job "swamping out Greyhound buses," or "washing cars in a rubber suit," or even "washing dishes in a diner."  Danny, however, is not so sure -- his "imaginary" friend Tony has been showing him visions of the Overlook in his dreams, and what he sees frightens him. Meeting the hotel's chef, Dick Hallorann, gives Danny the chance to understand why he sees things or knows things that others don't: he has "the shine," an ability shared by the chef.  They both realize it in the other, but as Hallorann explains, Danny has the biggest shine he's ever encountered.   Danny levels with Hallorann that he's frightened, but Hallorann assures him that if he needs him, he only needs to send a mental message to him and he'll come back from his other job in Florida  to help him.  He also warns Danny that places can shine, and as the Torrance family is about to discover, the Overlook is one of those very places.   The hotel is a place where "all the hotel's eras" are together at once, an "inhuman place" that "makes human monsters." 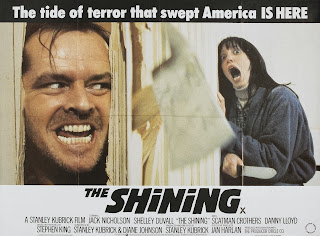 The Shining has long been one of my all-time favorite horror novels, meriting the switch some time back from mass market paperback to 1st Doubleday hardcover book club edition.  It may not be filled with the kind of horrors seen in the Kubrick film (which I actually loved as well, but in a way not connected to King but to Kubrick's vision and genius here), but it is one of the most intensely cerebral novels of horror I've ever read.  The symbolism of the wasps, for example, is incredibly potent, a thread that runs completely throughout the story and absolutely necessary for understanding what's going on here.  Another point: in Kubrick's film Jack's character comes across as a raving lunatic, while here, it's much easier to see Jack as more of a victim of the hotel itself, allowing the reader to view his character more on the edge of sadness and empathy rather than as a person bent on self destruction and insanity.  If I had to make a top ten list of horror novels, this book would definitely be on it, although considering the horror novels being published today, it may seem relatively tame to modern  readers.  For me though, it is and always will be a classic.

Moving on to Doctor Sleep,

Where The Shining is brimming over with horrific intensity, Dr. Sleep is in part a coming-of-age novel as well as a novel about demons, both internal and external, a bit more relaxed in the telling and well, for me, not nearly as frightening, cerebral or haunting as its predecessor.  That is most definitely NOT to say it's not good; it's just very different.

The story catches up with Danny (now Dan) Torrance years after events at the Overlook.  He still has "the shine," although after years of alcohol abuse, it's been "tamped down" somewhat.  Dan has been unable to keep a job because of his drinking; at the same time the alcohol helps blot out the visions that continue to haunt him, for example, the "ghostie people" like the woman in room 217 at the Overlook.  He's also learned how to put these visions and his ethereal tormentors away in a mental lockbox, but at some point Dan just hits bottom.  Afterwards, he just wants to get away and make a new start -- after a bus ride into Frazier, New Hampshire, something inside of him realizes that this is where he needs to be.  He takes a job, and his boss ultimately gets him into AA, after which he starts work in a hospice center where he's nicknamed "Doctor Sleep" because of his ability to help the dying pass on while holding their hand.

As Dan is going through his bottoming out and taking steps to become human again, a girl named Abra is born, and as it turns out, she is also gifted with the shine.  With abilities much more powerful that Dan's ever were, she makes contact with him through her mind, and can even switch places via Spock-like mind melding.  But trouble is looming: a group of ancient beings known collectively as "the True Knot" also have powerful psychic abilities, and they actively seek out young people and children who like both Dan and Abra have "the shining," capture and torture them, and then use their psychic essence (which they call "steam")  to sustain themselves and keep themselves young -- psychic vampires, if you will.  The steam of one of their young victims, however, left some of the True Knot's members with a huge problem.  The group has also come across Abra and her potent abilities, which may be stronger than those of the True Knot's leader, Rose, who sends some of her "people" to pick her up, hoping that her "steam" will provide a much-needed solution to the group's problem as well as much-needed sustenance.  Abra reaches out to Dan for help, but he will need to revisit dark parts of his past in order to save her.

There's so much to like about this book which not only has a suspenseful horror story at its center, but also focuses in great detail about addiction. Personally, I enjoyed this facet of the book because it not only keeps in line with The Shining, but given Stephen King's own addiction background, he knows what he's talking about and it makes Dan's character much more credible.  But even if the addiction aspect fails to grab you,  the author has this incredible talent for incorporating the mundane into this story, disguising his dying-breed psychic vampire creatures as denizens of the world of  retired RV ramblers.  As he shifts to the story of the True Knot, he begins his chapter with how very annoying the traveling grannies and grandpas are on the roads in their big Winnebagos or other big vehicles,


"the RV People, elderly retirees and a few younger compatriots living their rootless lives on the turnpikes and blue highways, staying at campgrounds where they sit around in their Walmart lawnchairs and cook on their hibachis while they talk about investments and fishing tournaments and hotpot recipes and God knows what.  They're the ones who always stop at fleamarkets and yardsales, parking their damn dinosaurs nose-to-tail half on the shoulder and half on the road, so you have to slow to a crawl in order to creep by. They are the opposite of the motorcycle clubs you sometimes see on those same turnpikes and blue highways; the Mild Angels instead of the wild ones."

Seriously, you know exactly who he's talking about because they're everywhere, and I have to admit that these few pages made me laugh out loud in recognition.  Try going down Highway 1 at Big Sur in California  behind a huge RV going 10 miles an hour listening to your otherwise calm husband bitch and moan,  and you'll know that he's described these people to a tee.  Mr. King also manages to toss in a nod to his son's NOS4A2, both in terms of a character mention and a bumper sticker on (where else?) the back of an RV.  Basically the only thing I really did NOT like about how he wrote this novel was that he throws in a major coincidence in the novel that I thought was a cop out (you'll know it when you see it) and made the whole set up kind of cheesy. 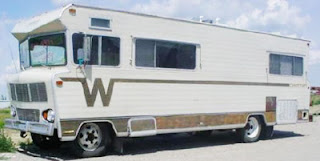 One more thing.  In my very humble opinion, readers shouldn't judge this book as a true "sequel" to The Shining.  There are several reviewers who are saying they've been "let down" or have made other negative remarks while trying to compare the two.  My guess is that a) they haven't read The Shining in a while or are going off the Kubrick film as their source or that b) they're so fixated on the idea of this novel as a sequel that they're trying to draw parallels that aren't there.  There are large parts of the The Shining worked into this one, so it works that way, but Doctor Sleep is also a fun read on its own, though less intense and definitely less cerebral than the other.  My advice is to just sit back and read it, and enjoy it for what it is rather than complain about what it isn't.
Posted by NancyO at 2:49 PM