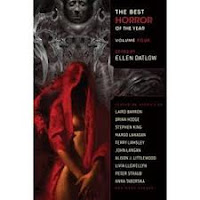 "The details may change. But the fear remains."


Well, maybe not so much.

I'll just come right out and say it. So far, I haven't been duly impressed with this series.  Now and then the editor has selected some impressive entries that have managed to produce that little frisson of nerve tingle, but on the whole, there hasn't been much in the way of stalking dread or nightmare-quality horror in any of these books.  Now having said that, I did see another improvement leap from the previous volume in this series to this one, with five decent stories.  I don't know why anyone else reads horror, but for me it's the challenge of finding stories that send shivers of fright up and down my spine and discovering authors whose writing is so good that I'm actually creeped out for a good long while.  That is what I look for when I pick up a horror tome -- and while things are much better than in the last book,  as an oeuvre, this series has been somewhat disappointing.

There were a few stories in this installment that I felt were beyond good. There are 18 total (* indicates the ones I thought were better than others):

1. The Little Green God of Agony, by Stephen King
2. Stay, by  Leah Bobet
3. *The Moraine, by Simon Bestwick
4. *Blackwood’s Baby, by Laird Barron
5. Looker, by David Nickle
6. * The Show, by Priya Sharma
7. Mulberry Boys, by  Margo Lanagan
8. Roots and All, by  Brian Hodge
9. Final Girl Theory, by  A. C. Wise
10. Omphalos, by  Livia Llewellyn
11. Dermot, by Simon Bestwick
12. Black Feathers, by Alison Littlewood
13. *Final Verse, by  Chet Williamson
14. In the Absence of Murdock, by  Terry Lamsley
15. You Become the Neighborhood, by  Glen Hirshberg
16. In Paris, In the Mouth of Kronos, by  John Langan
17. *Little Pig, by Anna Taborska
18. The Ballad of Ballard and Sandrine, by  Peter Straub

Five stories worth recommending -- for these books, that's a good number.

Beginning with Simon Bestwick's "The Moraine," a married couple whose relationship is well, shall we say, on the rocks takes a trip to the crags of England's Lake District.  The white mist rolls in, obscuring the steep path, so they choose an alternate way to hopefully bring them down safely.  Soon they begin to realize that they are not alone. While this story is not my favorite entry of the book, it's very well written with good pacing, but my first thought after finishing it was that it  reminded me in spots of Scott Smith's The Ruins.

In Laird Barron's "Blackwood’s Baby",  a hunting party is organized at the Black Ram Lodge, a locale familiar to readers of the author's story "Catch Hell," which I read in  Occultation.  Like that story, "Blackwood's Baby" is more on the occult side than most of his works, but it's still quite good. Hunter  Luke Honey, currently in Africa,  receives an invitation to join an exclusive hunting party at the Black Ram Lodge. Luke is already a tormented soul when we first meet him, a man with a troubled, dark past, and he accepts the invitation but wonders why he's been included.  This is no ordinary hunt -- the target is a stag that is purportedly the progeny of Satan himself.

A fake medium on a tv "reality" show finds out the hard way that she has a true gift when it comes to the psychic arts in "The Show," by Priya Sharma.  The revelation, however, comes at a very bad time and at great cost.  This story was very well crafted, perfectly timed and on the money for a good scare. 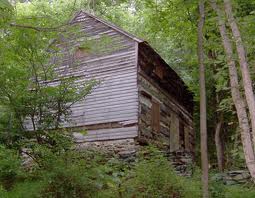 "Final Verse" by Chet Williamson, another story  I really liked, finds a once-popular bluegrass singer whose career is fading on the hunt for the missing last verse to a traditional Appalachian folksong called "Mother Come Quickly."  A bit of detective work leads him and a friend to an old house in the woods -- where they find much more than they bargained for.  This story is not only very well written -- it's incredibly creepy as well.

The last pick in my top five is "Little Pig," by Anna Taborska which is horrifying in the truest sense of the word.  At Heathrow, a woman arriving to stay with family slips, laughs hysterically, drops and breaks her glasses and mutters the words "little pig." The rest of the story takes the reader back in time to explain what it means.  To say more would be to wreck it.

I was also entranced at first with Peter Straub's The Ballad of Ballard and Sandrine, with its quirky kind of "deja vu" experiences aboard a strange yacht on the Amazon, but the story seemed to fall apart at the end.   It had me going for a while, though, so I'm mentioning it here. All in all, Volume Four had some really bad stories, some mediocre, and some that really caught my attention, and this installment was heads and shoulders above Volume Three.  Let's hope this trend continues.
Posted by NancyO at 8:39 AM