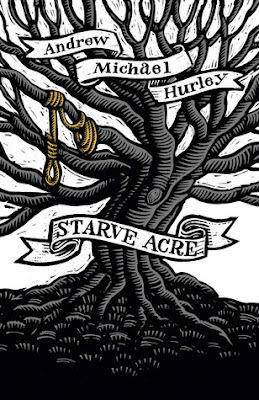 "That is a quiet place --
That house in the trees with the shady lawn."
If, child, you knew what there goes on
You would not call it a quiet place.
Why, a phantom abides there, the last of its race,
And a brain spins there till dawn."

I don't read a lot of contemporary horror novels, but there are a few authors whose books I will preorder once I know they're on the horizon for publication.  Andrew Michael Hurley is one of these people -- I absolutely loved his The Loney (in my opinion the best book he's written),   quite enjoyed his Devil's Day,  and now he's back with another fine novel,  Starve Acre.  This time around Hurley  is much more straightforward in terms of horror than the previous two, but don't be fooled: what happens here, as in the case of his earlier books,  plays out on many different levels other than simply gut-reaction horror.  It is truly one of the most disturbing contemporary novels on the darker side I've read in a while, in a good way, of course.

Once again, Hurley sets his story in a remote, rural locale, more specifically in the Yorkshire Dales.  It is here where Richard Willoughby  and his wife  Juliette have come to live in his family home, Starve Acre, handed down to Richard after the death of his mother.  Juliette was convinced that it would be better to start and raise their family in the Dales rather than the city in which they live, and eventually their son Ewan was born.  As the novel begins,  it is clear however that this is a couple in the depths of grief, as their only child has died.  Juliette spirals into deep depression and despondency to the point of spending each night on a mattress in Ewan's room, where she hopes to "pick up the faintest traces of Ewan," still remaining there by filling the space with mirrors and making recordings every night, hoping for "moments of contact."  Richard, who is on a sort of enforced sabbatical from teaching History at university, copes by staying busy with some sort of work, organizing his father's library and after discovering old woodcuts there, seeking the location of and hoping to excavate the roots of the old Stythwaite Oak, which, as legend has it served as the local gallows tree.  His friend Gordon tries to warn Richard away from continuing his search, but disregarding his advice,  Richard continues on, finding nothing but a skeleton of a hare which he brings into his home to study it.   In the meantime, Gordon, hoping to offer help to Juliette in some measure, introduces her to a strange group of mystics called The Beacons who organize a sort of seance in the Willoughby home.  The story truly launches from this point, and we are taken back in time to Ewan's childhood and life at Starve Acre up to the time of his death.   A few somewhat cryptic hints by the author clue us in that perhaps not all was well there, but   little by little we get a more complete picture as to why.


Anyone who has read Starve Acre will recognize key hallmarks of Hurley's writing, and I'll offer only two here.    For one thing, upon entering this story, you will find yourself caught in an overwhelming atmosphere of isolation.  He sets this up so very nicely, not only in terms of Starve Acre's remote location outside of the village, but  as events transpire, the growing distance between the Willoughbys and the local villagers becomes palpable, as Richard and Juliette slowly become outsiders and "outcasts" among them.  It also strikes me that he portrays the world of the Willoughbys as becoming ever more enclosed and slowly shrinking, as the majority of what happens in this story happens within the space of the Willoughby home and its immediate environs.  Further isolating this family, both before and after Ewan's death,  there is also much that occurs solely within the space of this couple's respective minds, into which neither wants to intrude.   But perhaps the key feature so well done in Hurley's novels is his trademark use of the landscape.  Aside from the physical bleakness of Starve Acre, the rooks that fly everywhere, and other features described throughout the story,  much of the sadness evoked here turns on this piece of land which had first captured Juliette's imagination as being the perfect place to raise children.  While she saw it as a "natural physical playground" that would grow as "they grew," the reality is that the Willoughby land lingers under a curse that leaves it doomed to having "not an inch of soil that's still alive."  And as young as he is, even little Ewan realizes a particularly close connection not just to the land, but to the very spirit of the place, which as this family will discover, is by no means benign.   This is a landscape upon which the past has been inscribed; it may well seem a "quiet place," but it is one which hides secrets that perhaps were better left undisturbed.

I have to say that this is the sort of contemporary horror story I actually enjoy reading, very rare in my repertoire these days.    Starve Acre is a novel about what is left behind after the loss of a child, with much of the story focusing on the landscape of grief itself.  The supernatural elements are subtle and nicely layered,  secrets are unfolded little by little, and there is that lovely sense of ambiguity that kept this book in my mind for a long time while thinking about it.  While it may seem to move a bit slowly, that's actually a plus in this case since it culminates in one of the most unexpected, horrific endings I've encountered in a very long time.   My single complaint centers around Richard and the hare,  to which the author provides a not-so satisfying explanation toward the end of the novel which I didn't buy at all.    Since I don't want to spoil things I can't go into detail, but astute readers will figure it out. Despite that particular flaw, I can without hesitation recommend Starve Acre   --  Hurley is so very talented, his work is refreshingly original, and I've become a true fangirl.