Demons of the Night: Tales of the Fantastic, Madness, and the Supernatural from Nineteenth-Century France (ed.) Joan Kessler 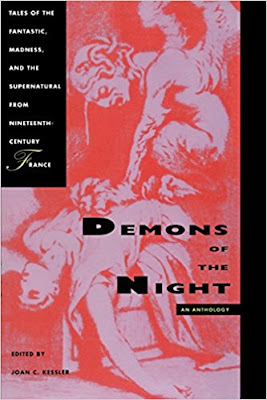 And it's back to France once again with this stunning collection of tales, nine of which are newly translated by the book's editor, Joan Kessler.

A few days ago I was asked by someone about the similarity between the "scare elements" of French tales like these and those I'd find in an American collection from the same time period.  Well, for one thing, I'm not overly familiar with American stories of the same period, but for another thing, I have to admit being thrown off by this question, so I borrowed from Terry Hale in his introduction to  The Dedalus Book of French Horror: The 19th-Century, trying to explain that it depends on who you read and when they wrote as to what you're going to find in their work:


"Born in the aftermath of the French Revolution, the Romantic writers of the 1820s and 30s brought to the genre narrative sophistication and their own set of macabre fears and anxieties concerning such matters as the death penalty, anatomical research, the cholera epidemic, infanticide, and man's inhumanity to man; the rise of spiritualism in the mid-century presented a fresh collection of moral problematics; finally, the end of the century, especially under the pioneering work in the discipline later to become known as psychology, witnessed a renewed fascination in diabolicism and morbid sexuality." (35)

I also noted that Hale  suggested that it was "the psychological insight of Poe" that stood as the "original impetus" for "contes cruels" while, as he stated, the "contes fantastiques" of the sort that are in this collection, were inspired by E.T.A. Hoffman, "the literary lion" who "introduced a range of themes, ideas and narrative techniques" that helped to "renew" these sorts of tales, which would "remain in vogue" over seven decades. (31)

There are many other factors that go into the making of these tales, much too lengthy to list and to explain in a nutshell;  I hope  my short answer was  understandable.  What I didn't say is that I don't really approach any of these stories to be hit with the "scare element" -- that's not at all why I read them.  If the frisson of terror climbs up my spine now and then, hooray, but I look at my reading of the works of these authors as a way of discovering how they each engaged with past and contemporary anxieties as well as themselves.

Ms. Kessler says of these authors in her introduction that


"Their works repeatedly probe the subject of the unconscious, often through the metaphor of the divided self or the landscape of dream and madness.  As they gravitate toward those areas of experience inaccessible to rational understanding, they actually lead us to a more complete notion of our own minds, with their web of tangled, contradictory motivations and impulses."


Briefly and with no more than short annotations from me here, there are thirteen fantastic tales in Demons of the Night, appropriately led by Charles Nodier's "Smarra, or Demons of the Night" (1821).  I had read a Dedalus book some time back called Smarra and Trilby, two tales written by this author and neglected to post because of time; his Infernaliana is waiting to be read on my Kindle.   "Smarra" takes the reader immediately into the realm of dreams, but wait -- there are dreams within dreams, with the only real anchors to be found in this multi-layered story at the beginning and end, and even then there is a big question that needs asking.   In this case it isn't necessary, but it would be very helpful to be familiar with The Golden Ass by Apuleius; I had to give it a read before I could finish my first go round with this story.   Next up comes Balzac's "The Red Inn" which is absolutely great.  The overall meaning of the tale will become clear as you read it, but the getting there involves one man whose thoughts about committing a particularly heinous crime become a reality -- but when the deed is done, he can't remember doing it.  Obviously there's more, but you won't hear it from me. Balzac is followed by "The Venus of Ille" by Prosper Mérimée,  which starts out with a sort of MR James vibe before it gets positively dark and deliciously creepy, with an ending I swear I'll never forget.   This story is followed by two absolutely delightful tales by Théophile Gautier, "The Dead in Love" (aka "Clarimonde) and "Arria Marcella."  In the first, which I can only describe as a story of a man with a divided self, a priest finds himself mesmerized by a beautiful woman at the exact moment he is to take holy orders; in the second, a trip to a museum to view artifacts of Pompeii leads one man to the woman of his dreams.   "The Dead in Love" will hold you spellbound until the last word -- it's also one that requires a lot of thought in the long run for more under-the-surface readers.


Continuing on we find Alexandre Dumas with his "The Slap of Charlotte Corday," which I'd already read in One Thousand and One Ghosts.  This piece reiterates the absolutely riveting story of Solange so don't miss it.   Next up is my favorite piece of writing in the entire book, de Nerval's rather poignant "Aurélia, or Dream and Life".  This story, which was written during several stints in different asylums, has been studied left, right, and upside down, and because of the depth and the richness of what's in this story, a number of different interpretations have emerged.  I'll just give a little teaser from the Introduction, in which the editor notes that "The narrator-protagonist's plunge into madness is depicted as a journey into the self..." and here, I'll add that it's a story that touches on the connection between his own madness and his mythologized dream life, without saying anything else.  Sadly, shortly after he'd written this story, de Nerval committed suicide.   Following de Nerval is Jules Verne's "Master Zacharius" that reminded me in a big way of the work of Hoffman.  It follows the story of a master clockmaker whose clocks begin to slow down and stop working; he will, before all is said and done,  become engaged in a struggle for very his soul.  I can't remember where I read it, but someone writing about this story referred to it as an examination of the "power-hungry" side of science, and that's about right. Considering much of Verne's other work, well, no surprise there.

Coming into the home stretch, we start with two stories from an author whose work I love, Villiers de l'Isle Adam, "The Sign," which takes us into the zone of uncanny coincidence, and "Véra," a story of a "love-obsessed" husband continuing on with his life after the death of his wife.   This one is very well done, pushing the envelope between reality and illusion to the very last word.  Supernatural? You be the judge.    Two tales of madness follow from another favorite author, Guy de Maupassant: his most well-known story, "The Horla," and his "Who Knows?"  I'm not going to discuss either of these but I will say that for me the joy in reading this author's work is that I find myself thinking "it could be this" or "it could be that," and realizing that my head is potentially getting as messed up as de Maupassant's protagonists who strive for rational explanations of strange phenomena.  By the time I'd finished these two stories, I felt so off-kilter that I had to seriously put this book down.   Personally, I think this man was a genius writer whose work ought to be read by everyone with an interest in the darker side of the human psyche.  Last, but by no means least, we have Marcel Schwob with his strange tale "The Veiled Man," which takes place entirely in a small train compartment.  I'll just say that it is quite possible that beneath the story he gives us there is an entirely different version.

Overall, this has proved to be another favorite book, one that I can absolutely without any hesitation recommend to all.  I get that French literature of the 19th century isn't everybody's thing, and also, if you're looking for something solely to scare the bejeezus out of you, this just may not be it.  These stories are things of beauty, not something you read simply in the hope of getting a few chills up your spine, although it happens quite a bit here.   Beyond great, really; I live to find collections like this one.