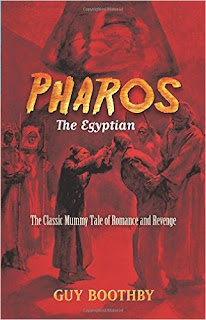 
"...he is as cruel and as remorseless as Satan himself."

Some time ago I read  Richard Marsh's The Beetle, which I loved and at the time designated as the literary equivalent of comfort food. Pharos is another I'd put in that category. It also reminds me of some of the movies I'd watch as a kid -- on Saturdays I'd turn on the TV, stretch out on the sofa and watch a show called Creature Feature that ran old horror movies.Woe be to he who interrupted those few hours back then, and woe be to he who interrupts my pulpy reading time now.  Actually, I think my horror-fiction reading career began back then, and it all started with this sort of delicious pulpy goodness.

It's not by chance that I mention Marsh's The Beetle here, because there is quite a bit of similarity between the two books. While the stories are different,  read closely, both Pharos and Marsh's novel reflect the same sort of anxieties centering around the perceived threats to western (read British) civilization and values by an outside/alien/Other.  In both books, that threat stems from Egypt, which is not surprising given the context of British imperialism at the time (it's very complicated, and I won't go into it here, but feel free to explore  the web if you really want to understand what lies beneath a LOT of late Victorian pulp/horror fiction, including Bram Stoker's Dracula.)  The similarities between The Beetle and Pharos don't end there, though -- both are tales of revenge and retribution, but here Boothby gives us a worst-case scenario. It's a page turner, to be sure -- not the best of literature, but who cares?

Sir William Betford of Bampton Street, St. Mary, Dorsetshire receives a strange letter from his friend artist Cyril Forrester.  It is, as he says, "one of the saddest, and at the same time one of the most inexplicable cases ever yet recorded on paper."  Along with the letter is a manuscript which Forrester wants Betford and his friend George Trevelyan to have published, and it is the contents of this manuscript which make up the story of Pharos.

Forrester has long had a special attraction to Egypt, which he believes he inherited from his father, "one of the greatest authorities upon the subject the world has ever known."   The story begins on a dark night as Forrester is walking toward Cleopatra's Needle, where he hears a man calling out for help.  Rushing to save the person from certain death by drowning, he realizes that there's someone else there who could have helped the man but made no effort.  In the now moonlit sky, Forrester accosts the "brute and monster" who let the man drown, but as his eyes made contact, he experienced an "indescribable feeling of nausea" like he'd never felt before.  In describing him, he notes


"his eyes, the shape of face, the multitudinous wrinkles that lined it, and above all the extraordinary colour of his skin, that rendered his appearance so repulsive. ... you must think first of old ivory, and then endeavour to realize what the complexion of a corpse would be like after lying in an hermetically sealed tomb for many years." (28)

This was his first encounter with the person he would later come to know as Pharos the Egyptian.

They would meet again many times, and Forrester makes the acquaintance of his young ward Valerie, a gifted musician and one of the most beautiful women Forrester has ever encountered.  After a musical evening in which Valerie gives a recital at the home of one of Forrester's acquaintances, Pharos appears at Forrester's home offering to buy a certain mummy that Forrester had inherited from his father.  The mummy, that of the magician Ptahmes, was one of Forrester's most prized possessions, and he refuses to sell.  Pharos is not happy, and the next morning, Forrester awakes to find that the mummy has been stolen. Worse yet, the police are at his door asking him questions about a murdered antiquities dealer.   When he tries to get to Pharos, he discovers he's left England for Naples along with Valerie, and thus begins a tale that will find this odd trio making their way through Egypt and then back to the continent, as a truly diabolical, evil, and nefarious plan is set into motion. 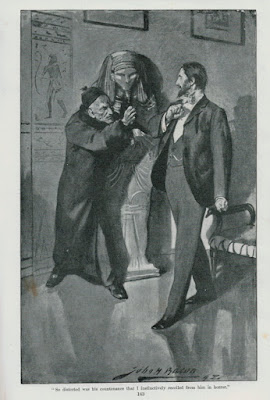 The Dover edition I have contains the illustrations by John H. Bacon, which are exquisite; the book itself is hours of just pure, pulpy horror fun. As I said, it's not great literature -- in fact, there are some internal eyeroll causing moments, but as far as I'm concerned, it's one that really ought to be in the collection of  both horror and pulp aficionados.   Pharos is one of the most evil,vile, inhuman, conscienceless villains to make his way into a book; he is someone who will stop at nothing to ensure the success of his horrific plan.   He is "as cruel and as remorseless as Satan himself," and god help anyone in his path.

While the mummy aspect won't remind anyone of Karloff here, the book is well worth reading and above all fun, delicious pulpy goodness.  It is also a bona fide page turner that I couldn't put down, and a sheer aahhhh read that should not be missed.