Double feature: The Magician, by Somerset Maugham and Trilby, by George Du Maurier

Before October rolled around, I had hoped that one of my online groups would choose Somerset Maugham's The Magician as its group read choice, but alas, it was not to be, so I read it anyway.    After finishing it, I read the intro and discovered that Maugham had said that the book "wouldn't have been written"


"except for the great regard I had for Joris-Karl Huysmans who was then at the height of his vogue." (ix)

The reference to Huysmans was to his Là-Bas,  but Robert Calder also notes in the introduction that there were other works with which Maugham would have been familiar, including George du Maurier's Trilby. So geek person that I am, I decided to read not only The Magician, but Là-Bas and Trilby as well. I will be writing on Huysmans' book a bit later, probably after October, so right now it's all about Maugham and Du Maurier.  The Magician, of course, was my favorite of the two, but they're both fun.


I'm not going to go into that whole Aleister-Crowley-as-model-for-Oliver-Haddo thing -- that's so well known that just mentioning this book will bring up that conversation quickly (which has happened more than once since I read it), nor am I going to get as deep as I could here due to time constraints.

The Magician is certainly worthy of being counted as Halloween reading material; it has so many of those elements that send my little heart racing, among them pulpy mysterious melodrama, a bit of decadence,  and of course the dark forces of the occult and the supernatural.    Recently arrived in Paris, Dr. Arthur Burdon has come to see his fiancée, Margaret Dauncey. While at a dinner party at the Chien Noir, the couple and their group run  into Oliver Haddo, who had the "look of a very wicked sensual priest."  Margaret took an instant, "uncontrollable dislike" to the man, but he seems to be part of the crowd where ever they go, and Margaret's friend Susie Boyd finds it "a privilege" to encounter "a man in the twentieth century who honestly believes in the occult." Arthur, the ever-rational "scientific man" is an unbeliever, and Margaret's guardian, Dr. Porhoët can't tell if Haddo is "an impostor or a madman."     Nonetheless, Haddo is invited to tea at Miss Dauncey's flat for the following Wednesday.  It is there that an event occurs that leads to Burdon physically attacking Haddo, and although Haddo makes no move to defend himself and actually apologizes, the small group of friends will discover that he has clearly not forgotten the perceived wrong to his person.  The incident sparks a most sinister, evil, two-fold plan of revenge, in which Margaret stands at the center.

I was hooked from the beginning, and later, as I realized where Maugham was taking this tale, it got even more interesting since it wasn't at all what I expected when I started it. Actually, I spent much of the time wondering like Dr.Porhoët whether or not Haddo was a true magician or just a fast-talking fake, and I think this ambiguity worked well all through the novel.  By the time I reached the ending, well, let's just say that pages were being turned very quickly.  There's much more going on here that I won't get into because of time, but pay close attention not only to the relationship between Margaret and Haddo as he focuses his hypnotic powers on her, but also to Margaret herself in relation to Burdon.   And do see the old silent film (1926)  if you can find a copy (I got mine on Amazon) -- while there are definitely some scenes played for laughs here in between the main action, and while the script deviates from the novel quite a bit, it's still well worth watching.  Paul Wegener (who would later play the title role in the original Svengali movie in 1927) makes a very creepy Haddo who sent chills up my spine just looking at him.

On to George du Maurier's novel Trilby now.  While his character Svengali may not have had an interest in alchemy or the occult like Maugham's Oliver Haddo,  it's easy to see how Du Maurier's portrayal of this character may have influenced Maugham in the writing of his own villain.  To be honest,  The Magician is definitely the better of the two books, but Trilby is also quite good in its own way.


Paris is once again the setting for the story of Trilby O'Ferrall, the young artist's model who enchants not only  the three artists of this story, but also the musician Svengali.  While Svengali is not the first fictional hypnotist (Dumas' Joseph Balsamo from fifty years earlier immediately comes to mind), his name even now conjures up


"The image of a sinister hypnotist, lurking behind the scenes, ambiguously responsible for breaking and remaking another weaker character..." (Daniel Pick, Svengali's Web, 1).

We first meet him as he comes to visit the  three artists Little Billee, Taffy, and the Laird. Du Maurier describes Svengali as  "a tall bony individual between thirty and forty-five, of Jewish aspect, well featured but sinister," with "bold, brilliant black eyes."  This scene is also the first meeting between Trilby and Svengali -- where he plays Schubert for her and then Trilby gives them all her tone-deaf rendition of "Ben Bolt." Svengali believes he can teach her to sing; some time later, he even offers to give her singing lessons, flattering her with "lovely language" about her voice, all while curing her migraine.  He tells her that the next time she has another headache that she should come to him again, and that she

While Billee wants to marry young Trilby, his mother steps in to do what she can to prevent the marriage from happening.   Trilby, thinking of Little Billee's future, does the noble thing and disappears from his life, only to resurface later.   It does take a bit of needle threading (and often a great deal of patience)  to find ourselves back to  the story of Trilby and Svengali, because around it, Du Maurier has placed us in the milieu of the Bohemian artists of the Latin Quarter of Paris, and he spends a lot of time giving us his own version, a "mixing of reality and fantasy" (xii) based on his own experiences.  Then, when the story moves to London, we are made privy to the world of the British upper classes, where Little Billee is now William Bagot, successful artist.  While you may wonder what's going on with Trilby all this time, well, eventually we do get back there.

My Oxford World Classics edition features Du Maurier's wonderful illustrations that I spent quite a lot of time looking at; there is so much going on in this novel underneath its surface, and Trilby is one of those books that has sparked quite a bit of academic interest in several fields.   Do as I did -- relax  and take it slowly. 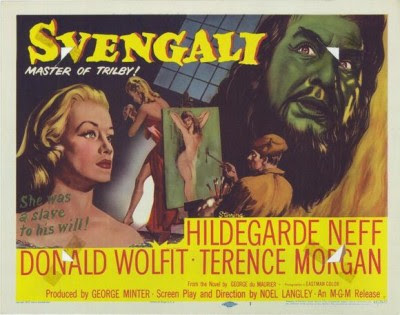 The 1954 film Svengali skips pretty much everything else in Du Maurier's novel to focus on the story of Trilby, Little Billee and Svengali, making it more of a sort of love triangle kind of thing.  The tagline for this one is great: "She was a slave to his will," although it does take a while for the movie to get to that point.  I didn't like Hildegarde Neff's Trilby; I found her rather flat compared to Trilby of the novel, but hey -- it wasn't exactly a waste of time to watch the film.

I can recommend both novels, although The Magician, as I said, is much better; it's also way easier to read as compared to the more sloggy sections of Trilby.