HR #6 & 7: two haunted house stories from the 80s: Haunted, by James Herbert and The Well, by Jack Cady 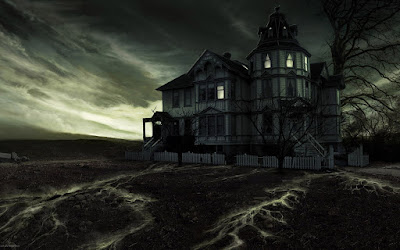 Trying to decide which horror novels from the 1980s to read is like trying to make your way around a buffet table that's loaded down with all kinds of food you'd like to eat, but the small plate in your hand sort of makes it impossible to try everything at once.  My library is chock full of these little gems,  but since 'tis the season, I pulled out two: Haunted, by James Herbert, the old beat up mass market paperback that I've had forever, and The Well, by Jack Cady, which is a newer addition to my library but one I hadn't read.  They are as different as night and day but they're both stories that take place in haunted houses, and after all, what's Halloween without being stuck inside of a haunted house or two?


Back when I initially read Haunted (which was probably in the 90s),  for some reason I thought it was one of the best haunted house stories I'd ever read; now I think that it had its moments, it was fun, but in the end, it's really only the ending that saved this story from being just another ho-hum haunting.  Before anyone starts mentally pelting me with rotten tomatoes, consider the fact that eons and a growing taste for more sophisticated haunted house stories now stand between this reading and the first.  What I did notice most prominently about it this time around, and what I really enjoy about it  is that it's really quite twisted in a hugely-ironic way, and what the author's done here turns his story into something wholly unexpected.

David Ash is what I suppose we'd now call a psychic/paranormal investigator with the Psychical Research Institute, and has an

He's exposed several fake mediums while investigating seances, and has made no secret of his "total rejection of the spirit's existence after death."  As this story begins,  he's been given the opportunity to investigate some strange supernatural activity at Edbrook,  the family home of the Mariells, and he arrives armed with not only the latest gadgetry, but his own conviction that the house itself is not actually haunted, and that there are likely other more natural, rational explanations behind what the family is experiencing.  In short, he believes that the Mariells are "mistaken."    He flat out tells them that while most people think of ghosts as "spirits of the dead," he sees them as


" a thought process, from someone now in another place, or an impression they've left behind."

Ash also believes that the Mariells might be experiencing


"Apparitions, telepathic visions, electromagnetic images. You might even call them vibrations of the atmosphere,"

but he stubbornly holds on to his steadfast refusal to believe despite the bizarre things he starts to experience at Edbrook.   Oh David...

What makes this book work for me is the sheer irony of it all which isn't revealed until the very end, and rightly so. In that sense, Herbert's done a fine job here, giving the average haunted-house story a major jolt and upending it to the point that it becomes something very different than the norm.  The sad thing is that up to that point, and I'm really sorry major Herbert fans (shields self from flying tomatoes),  what happens along the way may have been earth shattering in the 80s but well, kind of old hat by now.  That's not saying I didn't like it, but it really is a book that depends on its final few pages for the major shock.

On the other hand, there is nothing at all old hat about The Well, by Jack Cady, which is a book that is so rich in atmosphere that a serious case of the creepies grabbed me from the very beginning.  This may just be one of the most original haunted house novels I've ever encountered, and the story, like the house itself, takes several eerie twists and turns along the way as we weave our way through its darkness.

I realized this one was going to be something completely different even before I'd finished reading the first few lines:


"There are Things that do not love the sun. They weep and curse their own creation. Sometimes on earth a cruel shift takes place. Time splits. Corpses possessed at the moment of their death rise from tombs. The dark ages of history flow mindless from stagnant wells and lime-dripping cellars. The corpses, those creatures of possession, walk through ancient halls and rooms...  "Through endless halls are dusks gathering like the memory of screams. There is a concatenation. Presences drift toward combination. Darkness rises and takes shape behind the sound of footsteps."

The house at the center of things,  "begun by Johan Traker, father of Theophilus Tracker, grandfather of Justin Tracker, and great-grandfather of John Tracker," may just be seeing its last days on Earth. The old Tracker house is in the way of a new freeway, and the last of the family line, John Tracker, is ready for it to come down. The old place has

and John has spent most of his life away from the house trying hard to forget it.   He knows that it was not "just a house," but in actuality,


"more a trap, a disaster visited on Trackers for over a century. Man after man, and woman after woman, they added their share: predestined, it seemed, to pour into the monster the best of each individual genius."

However, what he does regret is that he doesn't know as much as he'd like to about his family. So by page twelve, we already get that this story is not only going to incorporate the house itself but its past inhabitants as well.  The blending of these two elements moves the story along, as does knowing that the Tracker house was built as a "trap to capture the Devil," a "theme" which had continued since the original builder, worrying for his soul, laid down its foundations. The traps come in various forms, not the least of which are time shifts. Yow.    And now, John Tracker has come to see the place for the last time, bringing along his secretary and friend Amy.  While they'd planned just a quick visit, they find themselves trapped there during a horrendous storm; and it's during this time that John Tracker realizes that the house just may have a mind of its own.

I have to say that there are spots in this book where the writing just grates, but overall, it's one of the creepiest, darkest, haunted house stories I've ever read, certainly on the list of most original.   Sheesh!  I read this one twice and even in the middle of the second read I was still freaked out enough that I had to put the book down and go do something else.  It's not only the horrors that stand out though, since it is also a story about the people who'd lived in the house from its beginnings, so there's also plenty of insight into human nature. I won't say more, but seriously, there's a reason that this house is described as a "well of depravity."

This one I wholeheartedly recommend, and of the two books here, it is hands down the winner.
Posted by NancyO at 10:27 AM