Those Who Haunt Ghosts: A Century of Ghost Hunter Fiction, (ed.) Tim Prasil 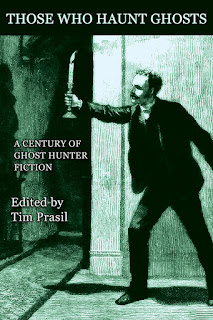 paperback - from the author, thanks!!!

"And you, my dear sir, ...would also do well not to play with things, the dark and terrible nature of which you are far from being aware of." -- 45


"It's grown rather dark now, and I've got the keys to the haunted house right here. Allow me to admit you. I hope that you enjoy your night -- and that, come morning, you'll be of sound mind and body. Alive, at the very least."   And with that word of warning at the end of the introduction to this book, we're off and running. I could almost hear that evil "bwa-ha-ha-ha-ha" laughter in my head as Prasil throws down that  challenge, and it definitely sets the tone for what's to come.

Editor Tim Prasil has spent what I'd say were likely countless hours "digging through nineteenth- and early twentieth-century supernatural literature" to find these tales and the ones that appeared earlier in his lovely collection Giving Up the Ghosts: Short-lived Occult Detective Stories.   In the introduction he reveals what he means by a "true ghost hunter," saying that it is

"that brave soul who learns of a haunting across town or in a wing of a castle they're visiting, and who then very purposely investigates it."  (10)

And that is most certainly the case with the stories in this volume, where the ghost hunters are either brave souls motivated by "curiosity" or "skepticism," or those who've been hired to investigate, then, of course,  there are tales of brave people, both men and women, who spend the night in a haunted location on a bet.

The opening story by an anonymous author "The Haunted Chamber" stems from 1823, while the final story is HP Lovecraft's  "The Shunned House," from 1928. These two bookend other works by a few more anonymous writers along with those who are much more well known among readers of old ghostly tales.  Just as a tiny sampler,  Edward Bulwer-Lytton has an entry here from 1859, Henry James makes an appearance with "The Ghostly Rental" from 1876 (excellent story, by the way),  and Prasil has included Ambrose Bierce's "A Fruitless Appearance" from 1888.  And anyone who's read Coachwhip's Shadows Gothic and Grotesque will recognize the name of Ralph Adams Cram, whose wonderful "No. 252 Rue M. Le Prince" (1895) also is included here.  To see the  full table of contents, you can follow this link to Tim Prasil's blog, The Merry Ghost Hunter; as I said earlier, there are 28 stories in this book, and I won't be giving away anything about any of them here.

There are too many stories that I loved in this book to cull out a single favorite -- I'm such a sucker for this sort of thing, especially those ghostly yarns that take place in an old house or in a reputedly-haunted castle that I was very happy with all of them. And while one might think that an entire volume of tales that take place in various haunted locations would soon enough become same-old same-old, that doesn't happen here at all.  To his credit, Mr. Prasil has chosen a wide variety of stories in terms of place, hauntings, and the ghost hunters themselves;  there are a also number of tales here with surprise endings that I never saw coming.

I can't wait to see what's coming from Coachwhip next -- every time I pick up one of this publisher's books I'm off into my own little world and loving every second of being there.  Ghost- and haunted-house story aficionados do NOT want to miss this one at all.