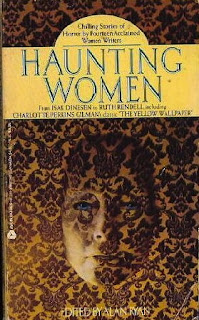 another January read that I'm just getting to, but whatever. There are fourteen stories in this book, and while most are definitely "chilling," here it's also all about the writing.

The editor's introduction, which gives nothing away as far as content is well worth reading before launching into the book itself.  Here, Ryan posits an interesting question:  given the fact that these stories are all written by women, he wonders if these stories are "different from the horror stories written by men."  His answer -- yes, "in some ways," they are.  How so, one might ask, and his answer would be that for one thing,


"For years in the past ... magazines were filled with 'wife-killer' stories written by men. The other side of the picture is represented here by three stories from earlier in the century, those by Charlotte Perkins Gilman, May Sinclair, and Ellen Glasgow.  Rosemary Timperley's story brings a more contemporary  view to the subject."

His observation is spot on -- May Sinclair's "The Villa Desirée," for example, written in 1926, is the story of a young woman who has become engaged to a man who is, on the outside anyway, absolutely perfect and just too damn good to be true.  But we know better and eventually so does the heroine of this story, just in the nick of time.

Another thing Ryan notes is that


"... many of these stories reflect a very strong concern for the sanctity of the home and the safety of children,"

again, spot on. Take Shirley Jackson's entry here, "The Renegade," which may not be as horrific as many of her other short stories,  but "The Renegade" reflects her recurring themes of isolation and paranoia once a family leaves its safe, familiar environment and as Ryan says, it's the woman here who is "trying to keep her sanity amid swirling domestic horrors."

The fourteen stories are, in order, with no spoilers:

1. "The Renegade," by Shirley Jackson
2. "The Villa Desirée," by May Sinclair
3. "The House of the Famous Poet," by Muriel Spark -- what I will say about this one is that aspiring authors really might appreciate this one
4. "Loopy," by Ruth Rendell, which is my absolute favorite story in this entire collection and is just downright chilling, but not for any scenario ever imagined by a horror writer.  Nope, this one is frightening without the author having to pull any supernatural punches. More than frightening, it's beyond disturbing.
5. "The Yellow Wallpaper," by Charlotte Perkins Gilman -- which still kicks me in the gut even after I don't know how many readings because of the nature of its subject matter
6. "The Foghorn," by Gertrude Atherton.  Another one to send a frisson of horror up the spine, but not until the very end when it all clicks.
7. "The Ghost," by Mrs. Henry Wood -- oh! This is a good one! Sad, but well done.
8. "Simon's Wife," by Tanith Lee is also amazing in a very human sort of way;  another gutpuncher when all is said and done.
9. "Hell on Both Sides of the Gate," by Rosemary Timperley, which is seriously just plain disturbing on any level anyone can possibly imagine.
10. "The Shadowy Third," by Ellen Glasgow -- another startling entry here, oh dear god. If I were going to offer a course in the creepiest stories written by women, this one would definitely make my list. It's the psychology in this one that really matters.
11. Jean Rhys is represented nicely here with her "The Sound of the River," which is, as The Cambridge Introduction To Jean Rhys notes, based on the death of her second husband (95). If you know anything at all about the author, you know she's written some very powerful work and this one is no exception.
12. "Robbie" by Mary Danby is so well known that it's been reprinted in several anthologies. It still, for me, has the power to shock.
13. "Heartburn," by Hortense Calisher, is beyond weird, and like the other stories in this collection, what is has to say about human nature will stick with its reader for a long, long time. Shivers.
14. "The Cloak," by Inek Dinesen just plain knocked my socks off.  Holy crap.

I will say that by modern standards most of these tales may seem a bit tame, but really, they're anything but.  "Chilling" is less the adjective at play here than "disturbing," and that's on a very human level even though there are certainly supernatural overtones involved in many of these stories.  This one I highly recommend -- another really good one for wrapping oneself up in a blanket with cup of tea in hand.
Posted by NancyO at 8:42 AM