something to look forward to in April: An Ossuary of the North Lagoon and Other Stories, by Frederick Rolfe Baron Corvo 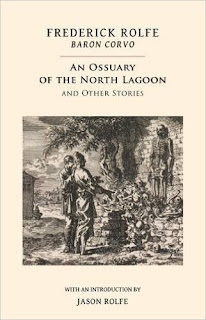 I'd heard of Frederick Rolfe (aka Baron Corvo) before reading this book, but until Anna sent me a copy of An Ossuary of the North Lagoon and Other Stories (thanks!), I'd never actually read anything he'd written.  After reading this one, though, I'm now hooked -- I picked up his Stories Toto Told Me and  I already have his Hadrian VII.

Jason Rolfe, who introduces this collection of Corvo's short stories, notes that his work "foreshadowed the Modernist movement that would eventually define 20th Century literature," and yet while serving as a precursor,

After two times through Ossuary of the North Lagoon, I'd have to say that I completely concur with this assessment -- and, aside from my happiness in finding another writer of this period,  the book itself  is a genuine pleasure to read.  There was more than one story that gave me a case of the giggles;  Corvo's personality and sexuality is writ large on these pages and the innuendo is often hot and heavy.  And then of course, there's the writing -- pointed barbs at his enemies (to which I will return momentarily), a knack for settling the reader into the time and place in which his stories are set, and beautiful description, especially when we're taken along the canals of Venice by barcheta.   Mostly though, from what I've read about him, this book is filled with stories that reveal quite a lot about Corvo himself and his rather odd worldview.

The three tales from Venice  (1913): "An Ossuary of the North Lagoon," "On Cascading into the Canal" and "Venetian Courtesy" open the book, followed by what has to be an experimental piece, "The Tattooed Wedding Ring" from 1897.  To be honest, it was a bit difficult to simultaneously keep up on the patterns in the writing and focus on the story itself.  The second time through it was much easier, but prepare to spend a bit of time on this one.  It's a good story -- just a tad difficult to read.  Next up comes "The Armed Hands" from "Circa" 1906 -- this one is a mind blower as the author once again puts himself into his tale not just as the narrator, but also as an object of the narrator's interest.. Another bit of honesty  -- I didn't catch on the first time through to what Corvo was doing in this story, but before coming back to it the second time, I read through  AJA Symons' The Quest for Corvo: An Experiment in Biography,  (NYRB, 2001), and without even discussing the story itself, Symons' recounting of a particular piece of jewelry that Corvo always wore set off the light bulb over my head when I picked up Ossuary of the NorthLagoon the second time.  Following that one, there are two stories that close the book, "The Princess's Shirts," which plays off an image of the boyish St. Sebastian (look here to get an idea in one of Corvo's photographs)   and "Deinon to Thely" which likely reflects Corvo's own, as one writer put it,  "defiant impiety against Catholic Church officialdom."


From what I understand, the pointed barbs I mentioned earlier show up in a lot of Corvo's work.  The chance to strike out at those whom Corvo felt had wronged him evidently became a regular part of his writing.   As just one example, he had become friends with Monsignor Robert Hugh Benson, an author  who was one of Corvo's benefactors for a while.  After some time Benson had decided not to deal professionally with Corvo any longer, and had left a less than sterling depiction of Corvo in his novel The Sentimentalists. For his trouble, he shows up as "The Reverend Bobugo Bonsen" in one of Corvo's novels.  In Ossuary of the North Lagoon, another real-life benefactor he labels as "The Professor of Greek" is pilloried. This seems to have been Rolfe's pattern -- the writer at the blog Short Story Review  notes that almost all of Rolfe's benefactors would be "rewarded with deranged suspicion and histrionic abuse." He also notes that

And from what I've experienced while reading this book, I'd have to concur.

Frederick Rolfe/Baron Corvo is a writer I'll be revisiting, and I have to applaud Snuggly for putting this collection into print. My only suggestion would be that it's worthwhile reading something about Rolfe's life before settling down with this book -- so many things in this book are made clearer once you have a little knowledge about this most fascinatingly-strange man under your belt. I can honestly say I've never read anything like this.  And frankly, I loved it.