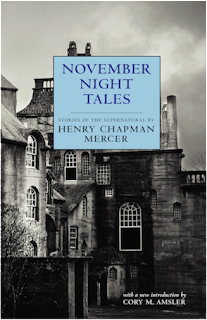 "How often must we account for the origin of human responsibility in nothing more definite than shifts of chance?"

The back cover blurb of this book says that Mercer

"channeled his antiquarian interests and his love of Gothic literature into November Night Tales (1928), a volume of highly imaginative weird tales in the mode of M.R. James."

I went into the book as I normally do, without expectations, but it wasn't too long into the first story, "Castle Valley," when I started thinking "I've read something like this before." Sorting through all of the clutter in my head, I realized that in its own way, "Castle Valley"  sort of reminded me of James' "View From a Hill."  In James' story, an archaeologist gets a view of the past with the help of some rather sinister binoculars; here, a painter and his friend discover a scrying stone that does much the same.   But this doesn't mean that November Night Tales is a James ripoff -- au contraire -- it is quite an original collection of stories that should be read and appreciated on its own merit.  This book gathers together many facets of Mercer's personal interests, including  the natural landscape, local legends, mythology, and above all, castles.  As the introduction notes,


"Indeed, to Mercer, the very presence of a castle suggested an almost infinite number of possibilities. 'Castles, Castles, Castles -- Where do their stories begin or end?"

As happens often with James (especially in his Antiquary stories), Mercer's  characters tend to find themselves in the position of coming across something they probably shouldn't be messing with, but are all the same compelled to explore further in hopes of some sort of satisfactory, rational answer.  In the process, these people end up discovering that there are often things that exist well beyond their understanding, but they also tend to realize something about themselves as well. 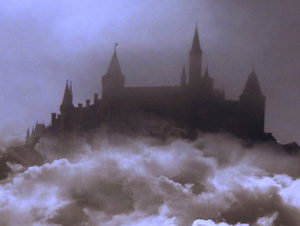 The table of contents is as follows (I won't go into each story here, since it's best to discover Mercer on one's own):

I will say that while I thought all of the stories in this book were quite good, I found three I enjoyed just a bit more than the others. There's  "The Dolls' Castle," a great gothic haunted-house sort of story that was just downright creepy, as was "The Wolf Book," which starts in an old monastery in the Carpathians.  I don't know about anyone else, but the combination of old text, monastery and the Carpathians is a definite draw for me,  a scenario I can't resist; there were other very cool historical bits in this story as well as a look at how local legends and myths can transform a community.    "The North Ferry Bridge" was also quite fun, with a little dark, pulpy creeposity  in the telling  which was a definite plus for me; added to that aspect, I also got the horrific tale of an escaped madman, another story type that I can't not read.  While these three elevated my heart rate for a while, all of the stories in November Night Tales were definitely "highly imaginative" and "weird," as promised.  Then, of course, comes the added bonus of finding a previously-unknown (to me) author and reading his work ...

While the stories may not exactly scare the pants off of readers, they are highly intelligent, well written and they set the brain into high gear while reading them.  These are dark tales for thinking people who don't need everything spelled out for them and frankly, they're just plain fun.

As always Valancourt, thanks for bringing the obscure back into the light.