A Suite in Four Windows, by David Rix 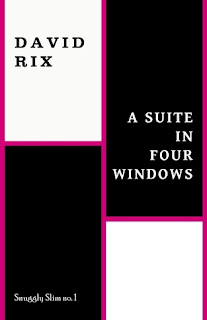 With apologies to Anna for once again taking forever to post about this book.

George Crumb is an avant-garde composer whose work Black Angels serves as the backdrop for this story. Rix's tale revolves around four college friends - Terry, Carrie, Mix, and Kate - who are assigned the task of doing an analysis of Crumb's work for a music course they're in together.  The four also share a London house and on "the hottest night of the year so far," one that promises storms,  they decide that they 'should probably get on with it."  That they do, with some pretty bizarre results.

Since this little chapbook is only 44 pages long, I'm not going into plot at all other than what I've just said, because it is a story that needs to be felt and experienced individually. But I was looking for some background on "Black Angels," and came across this at the webpage for the Kronos Quartet, who did a recording of Crumb's work:

"About Black Angels, Crumb writes: 'Black Angels was conceived as a kind of parable on our troubled contemporary world. The work portrays a voyage of the soul. The three stages of this voyage are Departure (fall from grace), Absence (spiritual annihilation) and Return (redemption)."

The first time through this little gem I thought "okay, music is supposed to speak to the soul, and that seems to be what's happening here."  The second time through, I noticed an added dimension -- that of  movement -- from a hellish underground tavern that one of the characters often refers to as "Satan's Vagina," where the story begins, back to the "haunted house" where they live. There, in small chapters that refer to five different "images" from Crumb's work, the story begins in the basement and moves upward, culminating in the attic. I happen to be a closet Jungian, but make of it what you will -- however anyone chooses to read it, it is positively eerie, as is Crumb's music, which I listened to while reading this story.

It is a shame that David Rix is not more well known.  His work gives me a perfect jolt every time I read it, and it is so effective in throwing me off-kilter that it takes a while to get my brain back to my normal.  Here he manages to do so in only 44 short pages, which is a great feat in itself.  Some modern novelists can write hundreds of pages and still not do he what is capable of doing in short form -- he outdoes himself here.  I will read everything this man's ever written because it's that good.  Once again, I've stumbled onto something right up my alley -- a work that stretches the brain and forces a reader out of his or her reading comfort zone into something out of the box and wholly mysterious. There is nothing more I can ask for -- and he certainly delivers.