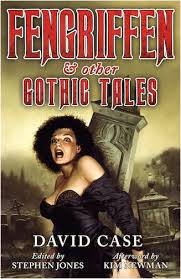 The front cover photo reminds me so much of the incredibly cool pulp cover art of long ago: buxom woman with clothes in tatters mid-scream, backed onto a graveyard monument, looking like she's about to meet a terrible end.    That face says it all -- something is very wrong here; something just horrific is about to happen.  This cover is like the appetizer that comes before the main dish --  the dessert came after I finished the book, when I did a mental ahhhhhhh at the satisfaction and pleasure that came from these stories.

Valancourt's edition of Fengriffen & Other Gothic Tales consists of four stories.  The two longest stories, "Fengriffen" and "The Dead End"  that bookend the shorter ones "Anachrona" and "The Foreign Bride,"  are the best in the collection, although all of them are spectacular, each in their own way.  He really picks up the Gothic tone here, so much so that in the title story at least, there is that lovely sense of  ambiguity that characterizes Gothic literature  -- is what's happening here truly supernatural, or is there something going on in the main character's mind? Or is it both?

Another thing I noticed in this book is that with the exception of "The Foreign Bride," science of some sort plays a role; when Case mixes science with the supernatural, the strange, or even the sexual, anything can and does happen.  In "Fengriffen," for example (without giving anything at all away, since people should really experience these stories themselves), the narrator is a sort of proto-psychoanalyst, a "practitioner of an infant science"  probing the "secrets of the mind" long before there was a Freud.  "Anachrona," which reminded me immediately of Hoffman,  includes scholars who "knew of Huygens and Newton, of pendulums and gravity," and "The Dead End," well, suffice it say that science has a major role to play in that one.    "The Foreign Bride," on the other hand, is a dark, slow burner of a tale that delves deeply into the evils that exist in human nature; the story feeds off of superstition.

If I seem vague, it's because this is a book where if I spill what's going on in the contents, much of the shock produced by these stories might be somewhat lessened for a potential reader, and I wouldn't want to be held responsible. In describing this book, I'll repeat what Stephen Jones wrote in his introduction:

"David's meticulous attention to detail has always set his writing apart from much of the literature labeled as 'horror,' which can only be applauded in a genre that all too often sacrifices both substance and style for cheap effect."

That is certainly true in this collection. Case writes very, very well and his work managed to get deeply under my skin, especially in "Fengriffen," "The Foreign Bride" and "The Dead End," all of which produced multiple spine tingles and neck hackles without once getting gross or resorting to splatter. It can be done and as Case shows here,  it can be done well. 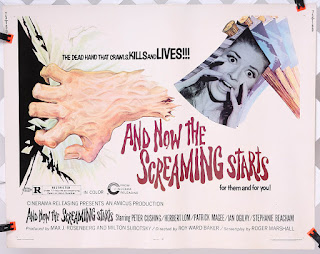 Don't miss the Afterword of this book, where Kim Newman discusses the film made from "Fengriffen," And Now the Screaming Starts (1973). I watched this movie over the weekend, and while the basic story with a few not-so-minor changes is basically there, the good people at Amicus decided it needed some more punch and added in some special effects (including to my surprise, a crawling hand left over from another Amicus film).  And they didn't call it And Now the Screaming Starts for no reason -- we were actually laughing wondering if there had been scream auditions ever held for the part of Catherine (played by Stephanie Beacham).  It's not the best movie ever, but it's a good way to pass a lazy Saturday afternoon.  But do read the book first -- it's so much better.
Posted by NancyO at 9:46 AM