book #2: The Witch and the Priest, by Hilda Lewis 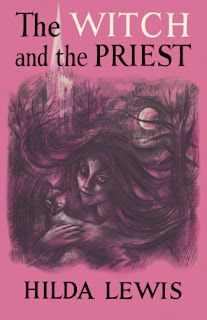 The "witchcraft" entry for this year's Halloween reading lineup, The Witch and the Priest by Hilda Lewis,  just may be one of the most intelligent witchcraft novels I've read on the topic. Based on the very real case of the Witches of Belvoir of the 17th century, Lewis has fashioned a very well-crafted story about what really lies beneath the persecution of these women.  It is also a story about justice, compassion and mercy and the often dual-sided nature of both good and evil.
The foreword to this book offers readers a starting point in terms of just who these witches were.  In a 1619 pamphlet that details the trial of these women (illustrated above), Margaret and Philip (Philippa) Flower, were executed after being "specially arraigned and condemned" by the assize judges after confessing not only to the "destruction of Henry lord Rosse"  by means of their "damnable practices against others." Their mother Joan was also arrested for witchcraft, but died along the way to Lincoln, missing the hangman's noose altogether.  It is Joan whose story drives the narrative in this novel; the entire book is an ongoing conversation between Joan and the Reverend Samuel Fleming, one of the examining judges in the original case. Fleming, it seems, has been carrying a heavy burden for a "twelvemonth," wondering if these three women were really witches or whether the

"poor hanged creatures were nothing but desperately unhappy; a little crazy, maybe with their miseries? Or -- how if they were poor, merely; and ugly and ignorant and uncouth? That -- and nothing more?"

He also wonders whether or not he was a "righteous judge or a credulous old man," and though his sister feels that he shouldn't worry so much since he didn't actually sentence them to be hanged,  his "own heart" would never "acquit" him.  Indeed, he worries so much that in a moment of agony he calls out to the now-dead Joan Flower, asking the question that had been tormenting him for over a year:


"Did we wrong you bitterly, you and your two daughters? Or were you rightly judged?"

bringing Joan to him, "as he had seen her last..."


"Since I died denying my Master, the gates of Hell are shut against me; since I died unshriven, the gates of Heaven are shut against me also. I come because you will not let me rest. While I was yet alive you did not with a full heart wrestle for my soul. But because you grieve for my sake, one more chance is given you to win my soul for your god. If you fail, your soul in is peril also, because you failed to do that which your god set you to do."

Once Fleming agrees to listen, she begins her long story, explaining how and why she became a witch and how she got her daughters involved with her Master.   In fact, the entire novel is a long conversation between Fleming and Joan Flower that not only focuses on the Flower family and their deeds, but on Fleming himself, justice, the nature of good and evil, and above all, compassion.

I think I'll leave it there, but I will say that this novel has it all. You have your Sabbats, esbats and frenzied orgies; there are drugs that offer the feeling of flying, witches' familiars, curses, etc. At the same time Lewis patiently applies astute reasoning to why women (in this case anyway) were often branded as witches. She gets into the socioeconomic reasons, the class/caste differences between the regular folk and the nobility -- the mutual mistrust between the two groups,  the double standard benefiting the latter among other things --  and even more relevant in today's world, the failure to take into consideration that some people are just not as mentally acute as others, calling for a justice tempered with mercy and compassion in their cases.

The Witch and the Priest is definitely what I'd call a page turner, but it is also well written and intelligent, making this a novel very much worth reading.  No "Charmed" BS here -- just a great book.