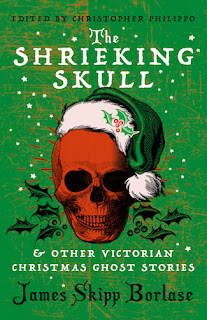 "Truly, we little understand the mysteries of that world unseen, yet so near."
9781954321854
Valancourt Books, 2022
184 pp
hardcover
This book marks, I do believe, the first time a Valancourt Christmas edition has featured a single author; here it's a Victorian writer by the name of James Skipp Borlase (1839-1909).    Datewise, the stories in this volume range from 1867 to 1907, part of the "untold number of short stories" he'd written;  Borlase also, according to the editor's informative introduction, wrote "as many as a hundred serialized novels," a seriously major output over a very long career.
One thing I've discovered while reading this book in particular is that evidently, Victorian readers must have truly enjoyed reading tales based on their own history, as there are a number of stories set in the 17th and 18th centuries.  They seemed to also enjoy stories that hearkened back to old, familiar folklore and legends, and after 1880 Borlase began employing a technique in which he would identify

"short passages regarding ghosts, witches, deals with the devil, and so on from works of local history and folklore, then writing a longer story of his own from that germ of an idea and resetting the events around Christmas."

Personally, I think that was a good choice on his part, starting with the familiar and then embellishing, and that concept takes shape at the very beginning of this collection, with the first story,  "A Weird Wooing."  It begins on  Christmas Eve in January, 1748 and concerns an ill-fated romance between a young woman and her ardent suitor whose lands had been confiscated because he "drawn his sword, on the losing side, during the Civil War of 1745 and 1746." It  seems that this guy means to make his fortune and win the girl back by going to  Edinburgh where a treasure lies hidden in a house beset by the plague in 1645, sealed up "lest the pestilence should burst forth ..."  It seems that Death guards the place, so we shall wish him well.  The titular story, "The Shrieking Skull,"  set in Lancashire, begins in 1650, the year after Charles I was executed at the hands of Oliver Cromwell.  Once again politics divides a young couple in love.  She, Ruth,  the daughter of a Puritan is being (once again -- a very common theme throughout many of these stories) forced into a marriage to which she refuses to agree, and he, Ralph Osbaldiston, a Cavalier having lost his ancestral lands to her father when they were confiscated by Cromwell.  His family has long been known to have the "second sight," and he puts a curse on her groom-to-be that on the wedding day, he will either die "the death of a wolf" or will live "the life of a tortured fiend in hell."   As the next chapter heading begins, "Enter the Shrieking Skull."  I did not know this, but according to the editor,  a shrieking skull is a "British tradition," and with just a bit of googling, I found a few examples  of this phenomenon.  Actually, there are two different skull stories in the book, but this one is the best.    Yet another story, "The Black Cat or The Witch Branks of Loughborough,"  goes back even further in history, set in Leicestershire in the 1630s in a small town of  Loughborough, where one young woman, Madge Calvert,  covets the admirer of Muriel Fenton and will do absolutely anything to have him for herself.  The idea of just how to obtain her goal begins when Muriel finds a black kitten.  You may likely guess where this might be heading, but there are a few surprises yet to come.

A somewhat bizarre tale  that I thought fit quite well in the weird fiction zone is "Tale of Two Christmases," which employs the old "White Lady" legend (which, I might add, is not limited solely to the UK, but is famous on a global scale in different variations) along with a wee bit of fairy lore.  It seems that a "family spectre"  guides two brothers, one a widower still missing his much beloved wife, to a small hill of snow, where they make a surprising discovery of a young girl who likely would have died without their White Lady's help.  The strangest thing about all of this is that this child bears a striking resemblance to the older brother's dead wife, who had promised on her deathbed that she would one day return.   And finally, the story that gets my nomination as most Christmas-y is "The Haunted Silk Mill; or the Ghost-Guarded Treasure," first appearing in 1905.  Set twenty years earlier, the story begins on a "blazing hot day" in Derby when at 6:30  p.m. the local silk mill catches fire. Fast forward five months plus and the heat has given way to the freezing cold and a "most severe winter."  A strike has closed the silk mills and the workers are starving.  Jane Morgan is with her beau, Joe Need and his mother, Joe having been seriously injured in the earlier fire and unable to work.  He tries to convince her to throw him over, since his injury prevents him from any labor, and he won't stand in the way of her marrying someone else who might take better care of her.  Jane refuses to hear it, having loved Joe since childhood, and hits on a plan to better all of their lives.  According to rumor,  there is a treasure hidden in Joe Lombe's silk mill, and she plans to go and get it.  She hands Joe a "scrap of discoloured, mouldy parchment, which smells as though it had recently been taken out of some grave" with the key to gaining the treasure.   The note promises that "no grizzly ghost can do her ill" if she fulfills certain conditions; in fact it's just the opposite.  If all goes well, it says, "... perhaps a ghost may point the way."
This is probably the most different of all of the Valancourt Christmas volumes, and the stories included in The Shrieking Skull may not be the most frightening ghostly tales ever written,  but more important than leaving modern readers with a case of the heebie-jeebies, I think, is what Philippo says about Borlase's stories here, that

"... this first collection of so many of his Christmas ghost stories should provide an informative and enjoyable window into the tastes of the Victorian era."

That it definitely does, and really, it's not too difficult to imagine a Victorian dad with his family all cozied up in the dark around the blazing fire in the hearth as he reads a few of these tales (in my head by candlelight),  inducing many a shiver among the wee ones.   My only complaint here is that many of the stories tend to center around romantic rivalries or lost loves that  make for one-note reading at times, and really, it's like a breath of fresh air when something different actually pops up in the story lineup.   On the flip side though, it's very much a plus to have been introduced to the work of James Skipp Borlase, whose name has never before blipped up on my reading radar.  I happen to very much enjoy this sort of thing because I'm a total folklore fanatic and a three-times history major, and I especially enjoyed the way Borlase reworked old history and old legends in his own way to fit the bill for the Christmas holiday season.
As the editor notes,

"Victorian readers' concept of 'ghost stories' generally and 'Christmas ghost stories' in particular was broader than the conception of some readers today,"

something I totally understand having read so many of these, and something for other readers to keep in mind as they read through these old tales.  I totally appreciate all of the work Christopher Philippo has put into this book, and for me, it's a welcome addition to my home library,  a book I'd certainly recommend, especially for regular readers of Victorian ghostly tales.   My advice -- be patient, but then again, if you've read a lot of Victorian ghost stories, you already know that you should.
Posted by NancyO at 2:23 PM