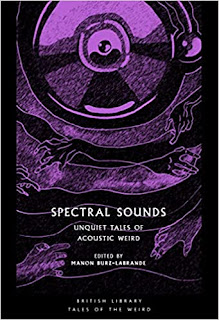 9787012354172
British Library, 2022
308 pp
paperback
In this anthology, as the editor of this volume says in her introduction,  "unexplained noises take centre stage."  I would think that at least once in someone's life, he/she/they would have experienced strange aural phenomena -- I know I have.  When I was about seven, we had a heater in our house that made strange noises now and then which reminded me of footsteps and I would just lay there at night in bed frozen to my core from fear.  I've been awakened at night more than once by someone distinctly calling my name,  bolting straight up in bed, only to find my sweet spouse still snoring away.  I could list others, but let  me just say that compared with what happens in these stories, my experiences are minor.
Burz-Labrande divides this book into four thematic sections.  The first is  " 'I Heard a Noise, Sure Enough' : Living with Audible Presences"  and you  have to love an editor who starts her book with a selection from Florence Marryat (1833-1899), whose short stories, novellas and novels have given me hours of entertainment, especially her bizarre The Strange Transformation of Hannah Stubbs (1896) and The Blood of the Vampire (1897),  republished in 2009 by Valancourt.  I love her weird stuff so much that I bought the two-volume set of work from Leonaur, The Collected Supernatural and Weird Fiction of Florence Marryat, and I always rejoice when I find a collection of ghostly tales and find one of her stories in the contents.  Getting back to Spectral Sounds,  the Marryat piece included here is  "The Invisible Tenants of Rushmere" which made its debut in her The Ghost of Charlotte Cray and Other Stories published in 1883.  A London doctor who believes he's on the edge of a breakdown and is looking for a few months of "complete quiet," finds a house "on the banks of the Wye, Monmouthshire" that promises "excellent fishing," rounds," and a nominal rent.  It is, he thinks, "the very thing we want," and the family soon takes up residence in the place.  It is a bit on the isolated side, and this worries his wife, but as time goes on there are more pressing matters to deal with as the family begins to experience some strange but unseen phenomena.  In conversation with the landlord of a nearby pub, the doctor learns that  "No one who lives at Rushmere lives there alone," but the doctor refuses to listen to "any such folly."  As always, he probably should have taken the word of someone who knows.  It is a fine opener, the perfect haunted house story to read at night by booklight during a noisy thunderstorm, which is how I did it.   Also included in this section is B.M. Croker's "The First Comer"   and The Day of My Death" by Elizabeth Stuart Phelps, which unlike the previous two, takes place in America.
The second section, " 'I Had Heard The Words With Painful Distinctness': Perceiving Ghostly Voices"  begins with  "The Spirit's Whisper," by an unknown author but often attributed to Le Fanu.  You can be the judge as to whether or not it reads like a Le Fanu story.   My favorite in this section is "A Case of Eavesdropping" by Algernon Blackwood, which first appeared in his The Empty House and Other Ghost Stories from 1906.  Shorthouse,  down on his luck, left high and dry "in an American city" talks his way into a week's trial writing for a newspaper.   Forced by circumstance to live in a rooming house, he keeps irregular hours, thereby never meeting the "old gent" on the same floor.  Although "it seemed a very quiet house," well.... The remaining stories in this section are "A Speakin' Ghost" by Annie Trumbull Slosson, "The Whispering Wall" by H.D. Everett and "No Living Voice," by Thomas Street Millington.
The work of four very well known authors makes up section three, " 'I Jumped Awake to the Furious Ringing of My Bell' : Sonorous Objects and Haunting Technology."  Edith Wharton's "The Lady Maid Bell" is first up before  Barry Pain's very short "The Case of Vincent Pyrwhit;"  Rosa Mulholland follows  with one of my all-time favorite tales "The Haunted Organist of Hurly Burly" and H.D. Everett's "Over The Wires" rounds out this part.   "The Lady Maid Bell" (1902) wins for most atmospheric, as a young woman who's come to the end of her money after a bout of typhoid takes a job  at a country house on the Hudson.  She is warned before taking the job that it is "not a cheerful place,"  with the mistress of the house alone for most of the time after losing her two children and having a husband who is rarely there. When he is there, she is told, "you've only to keep out of his way."  Although the job suits her, even as isolated as she is there, she does wonder why her employer, Mrs. Brympton, doesn't use the bell to summon her but sends a maid to fetch her instead.  Let's just say she will definitely find out why in the course of things, but not before she is witness to some rather extraordinary phenomena.

And last, but by no means least, two stories bring us to the end of this volume in the final section, "Sounds and Silence: Acoustic Weird Beyond the Ghostly."  The first is a tale by Edgar Allen Poe, "Siope"  which I have to admit that I'd never read before; the book ends with  "The House of Sounds," by M,P. Shiel, which the editor refers to as "a masterpiece of the acoustic weird."  I wholeheartedly concur.   On an isolated island off the Norwegian coast, the narrator of this story has been called to the home of his friend.  The noise of the waves is not only constant, but along with the fierce howling of the gales tends to drown out other sounds so that the conversation between the two has to be conducted largely via written notes.  While I won't go into any detail here (if ever a story needed experiencing this is it)  think family curse, a strange machine, altered states of consciousness and time ticking down toward a very palpable doom.  The editor mentions its comparison to Poe's "Fall of the House of Usher," but this story goes well beyond Poe into something entirely its own.  It is truly one of those tales that once read, will never be forgotten.
I love these spooky tales from yesteryear and I really enjoy the British Library Tales of the Weird Series, offering readers the opportunity to find authors and their works which they may not know, as well as incorporating more famous (and often anthologized) strange tales into the mix.  Not all of these stories floated my boat but the ones that did provided several hours of enjoyment, chills up the spine and often left me thinking about them well into the night.  I definitely recommend this volume as well as the complete series of books from the British Library.   And since it's October, these stories are more than perfect for Halloween, but they can be enjoyed any time of year.  I am truly in my element here, happy as a clam and wanting the show to go on long after the book is finished and the booklight goes off.
Posted by NancyO at 10:56 AM