and finally, it's just not Halloween without The Valancourt Book of Horror Stories, Volume 4

I read this book over the last two days of October, because it is just not Halloween without The Valancourt Book of Horror Stories.  I have looked forward to these anthologies each year since Valancourt started publishing them in 2016, and I have never been disappointed.  Not that I expect to -- because of the wide variety of stories presented in each volume, I have found some of the best yet lesser-known gems of my reading life. 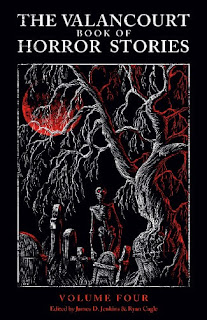 9781948405782
Valancourt, 2020
260 pp
hardcover
What is unique about this series is that all of the authors included in these volumes have been included in some Valancourt book or another.  This series also "reflects to a certain degree,"  as editors James D. Jenkins and Ryan Cagle say in their introduction,  what's in the works at Valancourt.  In this fourth volume, as they note, "represented in the present book" are authors from their Paperbacks From Hell,  Valancourt International, and  Monster, She Wrote series, including their first two international authors, Hubert Lampo and Felix Timmermans.  There are three stories which are "original contributions" to this volume, and as the intro also states,

"it wouldn't be a Valancourt Book of Horror Stories if it didn't include a selection of rare tales from the 19th and 20th centuries..."

and there are definitely plenty of those.
I made a list of the five that gave me the most reading pleasure. The  first three listed here are from 2020, which is most unusual for me, but in this case, it's all about the writing.   Elizabeth Engstrom's "Vivid Dreams" centers on an elderly patient in a nursing home who suffers from chronic pain and receives new medication to help her sleep. She is warned that there may be side effects, but I don't think she was quite prepared for what actually happens to her.  Sad and rather tragic, "Conversations With the Departed" by Steve Rasnic Tem follows a man by the name of John who has been asked to speak at his best friend's funeral. This would be easy to do if he didn't hear voices in his head, including that of the dead.   "The Poet Lewis Bowden Has Died," by Stephen Gregory is an absolutely gorgeous, sad, and melancholy tale related by a young English teacher at a boarding school who has had his first book of  poems published, and whose troubles began when he went off to Paris during a school holiday a year earlier  "to do all the things a young poet would do."  Another story makes the list, this time from 1924.    Michael Arlen's "The Gentleman From America" had me laughing here and there, but things turn to tragedy all too soon.  Two friends have a 500-pound wager  with Mr. Puce, the titular gentleman from America, that he would not be able to get through the night in a supposedly-haunted house. He gets one candle, no matches, a gun and to top off the evening, a book called Tales of Terror for Tiny Tots has been left as reading material.  Here part of the joy is in reading the story within the story and imagining yourself in Mr. Puce's practical, non-superstitious shoes.  A story from the 19th century completes my top five,  Eliza Lynn Linton's "The Family at Fenhouse" (1860).  A woman of unfortunate circumstance who wants to become a governess faces a number of hurdles, none the least of which is her "inheritance of disease and insanity."  Against all odds, she actually does manage to find a position as companion, but before long she will regret that she ever set foot in the house. Two things: her employer in this story is about as evil as it gets, and to use the word bleak to describe this tale is just not strong enough.  It is, however, a great story, and I have to say that as much reading I do from this particular time period, I haven't run across it until now. A double bonus.
The winner of the award for most disturbing tale goes to  John Peyton Cooke's "Let's Make a Face," which is set in the future when people are ranked in terms of their beauty, with their number determining their lot in life.    Some of the not-so-beautiful people, like the woman in this story, will do anything for a chance to advance themselves.    It's not often that a Valancourt-published story comes with a warning label, but this one does and rightly so.  As the editors write in their introduction to Cooke's tale,

"Brace yourself; you will have a strong reaction to this story."

Trust me, that's putting it mildly.  On one hand, the way the story is set up I knew that there was going to be something beyond weird that was going to happen; on the other,  let's just say that I was in no way prepared for how monstrously hideous things turned out.    Let's also just say that I wish I had a photo of my face after finishing it.

Without going into any detail about the remaining stories, excluding my top five and my choice for most disturbing,  there are nine more.  These tales span nearly a century, from Felix Timmerman's "The Coffin Procession" to "Rain," by Garrett Boatman, published in 2020.

I am so sorry to say this, but of this group, Garrett Boatman's "Rain" just didn't do it for me -- while it was definitely engaging in parts, it came across as a sort of mix of  Lovecraft's  "The Music of Erich Zann" and "The Shadow Over Innsmouth" transplanted to the Texas Gulf coast during a hurricane.  The others, however, are quite good, with honorable mention going to "Happy Birthday, Dear Alex," and "The Other Room," both especially fine tales and beyond poignant. The Belgian entries are fun as well, with "Rain and Gaslight" leaving me with that sense of things being off-kilter that I enjoy so much.

The stories included here range from the suspenseful to the strange, from the horrific to the harrowing, from yesteryear to today, and as is the case with every other Valancourt anthology, there is something for everyone to enjoy.  They also make for fun reading, and I can only imagine what a great time James and Ryan must have had while putting this volume together. It's largely because of this series and the Christmas anthologies  that my home library of older ghostly, gothic, horror, weird, and strange stories has grown immensely over the years --  all it took was a good story or two to start me on the road to my favorite type of reading, those long-forgotten, obscure, and in many cases, sadly-neglected stories from the past.   Here's to many more in the future.

Definitely recommended with no hesitation.